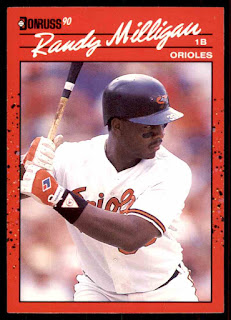 In every collection tucked into a closet or spread out in a basement there is one set that a collector has way too many cards of.  For me, it's 1990 Donruss. Distinctive because of it's red borders and copious amount of errors, variations and mistakes, this set is the epitome of the overproduced neo-vintage (aka junk wax) era of the early to mid-90s that almost killed the hobby.

I bought a lot of these cards.  I mean A LOT of them. At 50 cents per pack of 16 cards it was easy to accumulate a large quantity cheaply and quickly. Oddly enough, despite buying four or five packs a week for most of the summer, I didn't actually complete the set until two years ago or so as there were a handful of cards that I somehow missed during my initial collecting days.

In the meantime I picked up a lot of doubles. As of this posting, I have about 2,547 cards for this set. The completed set is only 716 cards so yeah that leads to quite a few duplicates.  While that 2500+ number is impressive, I've also probably given away roughly 600 cards in the last couple of years. Any trade I've made in the last three years where the recipient had 1990 Donruss cards on their wantlist received a handful or more of them even if they didn't ask for them.

Until recently I didn't really check to see if I was sending out error cards instead of actual duplicates since, except for the most notorious ones, there really wasn't much difference between the correct card and the error card. The Trading Card Database lists 89 variations or errors in the set with the most famous being the Juan Gonzalez reverse negative, a card that was highly sought after that summer.

Errors like that are rather easy to detect, others not so much. Along with incorrect birth dates or checklists with the wrong numbers listed there were the cards with a line through a letter. Such as this Kevin Hickey card. Who even notices that? Not me that's for sure.

Despite the overabundance it remains one of my favorite sets because it came during my peak collecting run as a kid. Cards were still affordable, card shops plentiful and people traded in person. By 1992 other things had intervened in life and collecting fell onto the backburner for about a decade.

The set also had all the hallmarks of those early Donruss sets. The first 26 cards were Diamond Kings, supposedly the best players of each respective team (Micky Tettleton had the honor for the Orioles). Those cards were followed by the Rated Rookies, each adorned with the iconic blue logo. As much fun as those cards were to get in a pack, Donruss kind of whiffed in their selection as the most recognizable rookies in the set (Sammy Sosa, Larry Walker, Bernie Williams, David Justice, and John Olerud) didn't receive the Rated Rookie status.

There were also an early form of inserts in the set as packs might contain the Bonus MVP or Grand Slammers sets in addition to the regular base cards. Donruss kept up their awesome quality control in these inserts as well because I'm pretty sure this isn't John Smoltz: 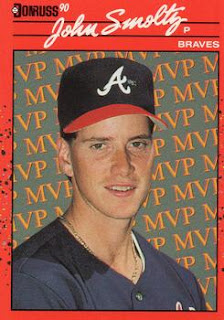 Flipping through the set to send out some more duplicates is always a fun trip down memory lane.
Posted by Justin G. at 5:42 PM

I've still got most of the "Recent Major League Performance" stats on back variations on my wantlist. (https://sites.google.com/site/cardwantlists/home/baseball)

I've got one row in a monster box of duplicates that I've never sorted. When I go looking for stars or variations for other people, I know they may be in there and I have to sift through the whole pile to find them. I enjoy it, so I may never sort those.