Orioles Victory Card Number 32: I just really like this card 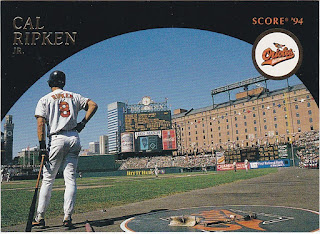 While surfing through COMC a few weeks ago I stumbled across this card. I didn't know it existed, but it was cheap and I didn't have it so I added it to my cart. Now, of course, I need to complete the set.

In 1994, Score partnered with Burger King to honor Cal Ripken Jr. with a nine-card set available at Burger Kings around the Baltimore and Washington, DC area. If you purchased a large drink, then for a quarter you could buy a pack of three cards. According to baseballcardpedia each pack contained two base cards and one gold parallel.

Featured above is card number 7 and is named "The Ironman". The back details a streak that was more remarkable than his consecutive games streak. On September 14th, 1987 (two days before my 11th birthday) his father, then Orioles manager, told Ripken to stay on the bench in the bottom of the eighth inning. That broke a streak of consecutive innings played that had started in 1982 and lasted for 8,243 frames.

The fact that the Orioles were losing 18-3 to the Toronto Blue Jays and Ripken, Jr. was in a bit of a slump made it easy for Senior. to make the call. According to the Washington Post article following the game,

"[T]onight worked out to be a perfect time to do it. I wanted to take that monkey off his back . . . I wanted to get everybody to stop writing articles about the consecutive-inning streak . . . Playing games wasn't wearing on him, but all those articles were."

As for Junior, he felt a little strange:

"It's a long time since I sat on the bench. I came in {the dressing room} and then I went back out and watched. It was a weird feeling and I need time to reflect on it."

He had been in a bit of a meandering slump that summer, seeing his average slowly drop from a high of .281 in the beginning of July to around the .250 mark when he was benched. Overall, 1987 was the first year he had a bit of a lull in his offense as he slashed .252/.333/.436 for the season, all career lows at that point. He still hit 27 home runs and drove in 98 so it wasn't like he was in a Chris Davis-esque free fall.

Following that benching, he didn't take another inning off until September 25th when umpire Tim Welke ejected him in the first inning of a game against the New York Yankees for, according to Welke, "He argued balls and strikes, screamed in my face and his helmet hit my mask."

(It would be his second career ejection, in 1989, where the umpire he ejected him, Drew Coble, would refer to it as like "throwing God out of Sunday school")

Still in between those rests, Ripken played 9 complete games, including both ends of double headers on September 18th and September 20th. Luckily, in the case of both ejections, Ripken had done enough to qualify for an appearence and keep his consecutive games steak alive. He had cracked the 900-in-a-row mark earlier in 1987 and was just started to garner talk about how he might be able to make a run at Lou Gehrig's record.

As for the Burger King set, I'll probably get around to completing it on my next order with COMC. The base cards go for about a buck a piece while the gold variations can be up to $3.00 per card. The only real difference is his name is in a gold script on front as compared to a white font.

It's a shame they don't sell cards through fast food restaurants any more (Tim Horton's does partner with Upper Deck for hockey cards in Canada). It was always fun to be able to grab some bonus cards while wolfing down a Big Mac or a Whopper.

Email me at QAPLAGCA at yahoo.com. I can get these a lot cheaper than that. I just got most of the gold set for about a quarter apiece.