Now we're in the groove. I'm currently writing this up at a Starbucks in the greater Tampa Bay area because I needed to get out of the house for a little bit. Visiting family is great, but there is only so long that you can stare at the walls.

It's kind of funny that everyone around me seems to be working on some serious stuff. Lots of school books out on tables for the middle of June. Then you have me, sitting alone and taking crappy cell phone photos of baseball cards (yes I wiped the table down first). Gotta love being a low-paid blogger some days. Here we go with today's pack. 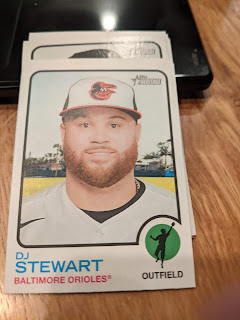 Back-to-back Orioles! Well, kind of. Mullins was the final card of the last pack and Stewart was the first of this one. The only problem, Stewart isn't currently on the 40-man roster. It was a bit of a surprise this spring when Baltimore DFA'd him, but unfortunately there is a glut of outfielders in the organization and the emergence of Anthony Santander kind of crowded him out. He is is still with organization and recently returned from the injured list in Norfolk. 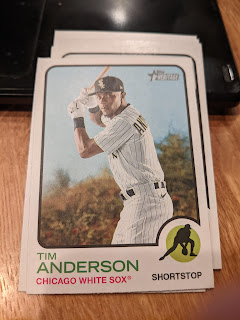 As they say, you don't walk out of Tuscaloosa and Andersen has seen very few pitches he doesn't think he can't hit. With a lifetime batting average of .290 and an on-base of .318 you can tell he doesn't take many free passes. His career walk rate is just 3.5% which is awesome. Go up their and hack, kid. 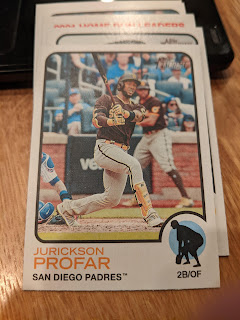 Another player that you wonder what could have been if injuries hadn't slowed him down at various points in his career, Profar has settle into a defense-first, play anywhere in the field kind of guy. After debuting as a middle-infielder with Texas he's spent most of the last few years in the outfield playing more than 20 games in left, center, right, and first base in 2021. He even chipped in 10 games at second base last season. He had some pop at points in his career with back-to-back 20 HR seasons. 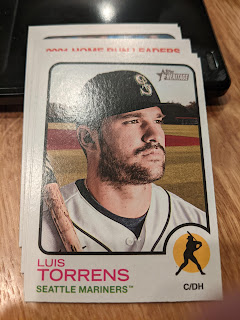 Another member of the young group of players in Seattle, Torrens has just 563 at-bats over five seasons in the majors. He's still only 26-years-old and showed decently in 2021, the one year he saw somewhat regular action. In 378 plate appearances he slashed .243/.299/.431 with 15 home runs. He hasn't found the seats yet this season in 93 PA, so that's a bit concerning. 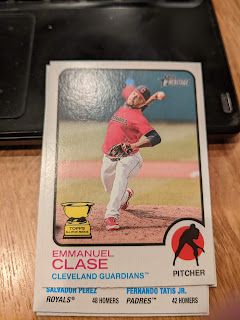 A Topps All-Star Rookie trophy card! Probably my favorite reoccurring subset in Topps sets. Clase throws 101 and has a 94-mph slider. Seriously, how does anyone hit major league pitching. 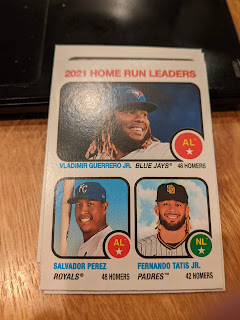 The nice thing about these leaders cards is that it's a cheap way to get a card with some legends on it. I can get a 1965 Topps Mantle for $40 raw or I can get a 1965 HR Leaders card that has his face along with Harmon Killerbrew and Boog Powell on it for just $12.50. As a cheap person I'm going $12.50 all day long. Plus, BOOOOOOOOOOOOOOGGGGG 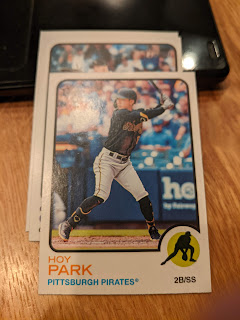 Pirates rookie card! Get your next Yankees star cheap. Okay, that may not be the case with Park as the 25-year-old doesn't crack the Pirates top prospects list. Also, he was already with the Yankees as he signed with them as a free agent in 2014 before heading to the Pittsburgh organization in a 2021 deal for Clay Holmes. Park was called up last week when Ben Gamel went on the IR, but sent down the next day later after the Pirates acquired Yu Chang from the Guardians. 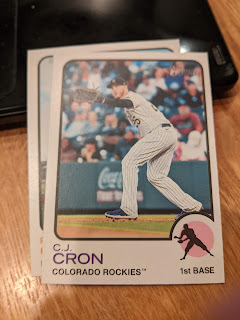 Hit bombs. That's pretty much Cron's approach to baseball. It's worked well for him as he's hit 160 HRs in 3054 at-bats for a 4.8% career HR%, well above the league average of 3.0%. He's done it without striking out that much. The University of Utah product strikes out in  22.7% of his at-bats, just above the league average of 21.8%. Not a bad way to earn an estimated $23 million in salary over a 9-year period. 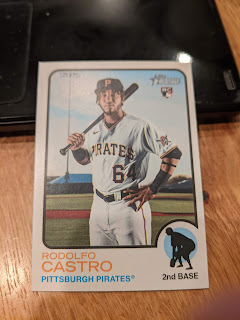 A Pirates rookie hot pack. Sweet! Castro had 5 home runs last season. They also happened to be the first five hits of his major league career. In case you were wondering, yes that is a record. Here's how his career started:

That's an interesting first nine games. At that point he had a .238/.269/.833 slash line with 5 HRs and 7 RBI. His first non-HR hit came a few days later and it was a ground-rule double. His first hit that actually stayed in the park came a few days after that and was a ground ball single up the middle. So far this season he has 14 hits and just one of those is a HR.