Friday Night Light - As in Light-Heavyweight 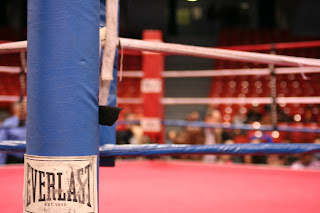 There are a few things left on my Sports Bucket list to accomplish, attend a Super Bowl, watch a football game at Notre Dame, play Scotland Yards, etc, but on Friday night I was able to check one off my list.  Attend a boxing match as a credentialed member of the press.  There is a part of me that wants to turn this lonely piece of internet real estate into something of a career, you know get paid to write about sports I like.  Boxing is one of those sports.

Last week I contacted Bernie Bahrmasel at 8 Count Productions to see if I could secure a media pass for Windy City Fight Night 21 which they were promoting.  I sent him a couple of links from this site and he said that I would be added to the list.  Awesome, my first press pass since my college days.

So last Friday, I braved the snowstorm (OK a few lonely flakes were falling), left the Duchess to her own devices, jumped on the Red Line, switched to the Blue Line downtown and an hour later I was standing outside the UIC Pavilion waiting for the doors to open. As usual I overestimated the time it would take me to get there and had a half-hour to kill.

It went by pretty quick as I started talking to another gentleman who was there to cover the fight. He had started a blog, got picked up by a boxing website and was looking at possibly working for Ring Magazine.  See dreams can come true!

Finally, the doors opened and I met Bernie to pick up my pass.  He looked busy so I didn't chat too long, just headed down to the ring where there was literally a seat with my name on it.  I was stationed at the end of the row of folding chairs ringside and directly behind the blue corner.  Not a bad place to watch a fight if you don't mind doing some ducking and weaving yourself.

I was pretty much alone in my section so I sat down and prepared some notes, got my fight cards lined up so I could score the fights as they progressed. Then I waited, and waited, and waited some more.  I got the distinct impression that I should have been somewhere else, but this being my first time I really had no idea where to go.

There was some action in the ring as one of the refs was testing the ropes and the floor to make sure there weren't any bad spots.  Oh, and the ring girls were practicing.  Holding a sign card and walking around the ring in 4-inch, spiked heels isn't the easiest thing in the world.  Especially getting in and out of the ring.  I'm glad I can say that there were no incidents and they performed their duties admirably.

Eventually the ringside personal showed up, judges, doctors, officials, a nattily-attired ring announcer and the photographers.  The crowd was slowly making its way in as well.  When the first fight started I would say that the blocked off seating was about half full and by the end of the night pretty much filled.  There was a security guard next to me that I chatted up throughout the fight and he said that they draw pretty well for most of their fights, especially when the "the Polish kid fights".  Alas, Andrezej Fonfara was not on the card for Friday's contest so I'll have to wait to see that in the future.

The first match got under way around the scheduled 8:00pm start time and steamrolled through right up until about 11:00pm.  I have a full review of the seven matches following this post if you want the details, but for now here are some observations of attending a live boxing match.

- TV does a decent job of mic'ing up the ring, but there is no way it can capture the sound of a perfect punch landing on the face or body of a person.  I was lucky enough to see examples of both types of punches and the collective gasps/screams from the audience when they landed.

- If there are more than two people working a fighter's corner, the time between rounds is complete chaos.  Only one member of the crew is allowed in the ring, but the rest still get up on the apron.  When it's time to leave the ring there's people leaping off, stools being dragged away, ice bags and water bottles getting knocked over and people streaming through the ropes and trying to navigate extremely steep stairs.  It's like a NASCAR pit crew without the air wrenches.

- Each corner seems to have one guy who shouts the same advice to the fighter through the whole match. It's usually something along the lines of "Don't get on the ropes!" or "Let your hands go!" or "Set the trap!". There was a lot of Spanish too, I can assume it's pretty much the same but can't be sure because the only words I understood were "mano derecha" and "la cabeza".

- Guillermo Sanchez has a very excitable trainer who talks with his hands a lot.  Which wouldn't be bad if he didn't have huge globs of Vaseline on them that went flying over his shoulder when his boxer was doing well. Remember that ducking and weaving I mentioned earlier?

- Watching a fight without having to listen to commentators or having access to replays definitely changes the way you feel about a fight.  You miss some of the insight, but also the subtle bias toward a particular fighter.

- Two things that will instantly get the crowd against you - entering to religious music and not being from Chicago. However, putting on a good show will win them back as Edner Cherry proved.

- That being said, the crowd was really pretty good.  It was extremely diverse and supported most of the boxers. They seemed to have a good time without getting out of control. The guard next to me said that the boxing crowd is generally well behaved and he would "rather work 12 boxing matches in a row than one rock concert".

- One thing they don't show a lot on TV is the aftermath of a knockout.  When Ryan Franklin (spoiler alert) was KO'd he was down on the canvas for a solid 10 minutes and when he did finally leave the ring it was on wobbly legs.  For a second I thought he was going to be tumbling down the ring steps even with assistance.  Yet, an hour later he was in the crowd, enjoying a beer and seemingly no worse for wear.

- Junior Wright is a name to keep an eye on. As is Adrian Granados.  Wright had an extensive amateur career and was probably the most polished boxer on the card. He actually reminds me of a young Sugar Shane Moseley.  Granados is a bit more of a brawler, but definitely a crowd-pleaser. His night-closing bout with Jamie Herrera would have fit right in on any Pay-Per-View undercard.

- Taking pictures and trying to follow a round does not work.

- A crowd's reaction to a big punch is awesome live.  I'm not sure there is anything like it in sports.  There is a mix of yelling with some "oh man'ing" and some "damn that had to hurt" all thrown together in a two-second yelp.  And when a fighter is on the ropes, the word "frenzy" is the only one that can describe the crowd.

- The 10-bell count is one of the most spine-tingling traditions in all of sports.

- My favorite note that I took was "crazy-eyed son of a bitch".  Which was in reference to the look Dimar Ortiz had in the ring when he was looking to finish off Francois Russell.

- The poor ring girls didn't get much action early on as there were two 1st-round stoppages and two 2nd-round stoppages in the first four fights.  So there was a brief intermission where they got to do their thing in the ring (walking around in high heels and bikini's) while tossing t-shirts to the crowd.


Overall it was a very entertaining night.  I would like to thank Bernie and promoter Dominic Pesoli of 8 Count Productions for allowing me to attend. I would also like to thank all of the fighters for putting on a good show.  If you're in town on March 16th I highly recommend picking up some tickets for Windy City Fight Night 22 - that Polish kid will be fighting so it should be a great night of fighting!
Posted by Justin G. at 11:40 AM

Love the column...hope to see more from events