Great is not enough

Lofty goals set by a first year coach. If he’s a mad genius or a crazy-eyed lunatic hasn‘t been determined yet. Guy Boucher’s ability to coach in the NHL is a blank slate. His success at the lower levels has been well documented. Will that change when the young guys desperate for a chance to play at the next level are replaced by millionaires coasting on past accomplishments? The Lightning players have nothing but positive things to say after the preseason. However, the players also raved about the previous coach during his early months as well.

The future is murky for the Tampa Bay Lightning, but the light seems to be starting to shine through. New blood has been brought in off the ice and on the ice. New GM Steve Yzerman has earned kudos throughout the league and the web-o-sphere for his moves in rebuilding the team. Boucher and his untested 1-3-1 system have everyone (including me) giddy with the anticipation of seeing a ferocious fore-checking squad that out hustles every team it plays. Will playing in Tampa turn into Three Periods of Hell for opposing teams?

That remains to be seen, after all they still have to play the games. What looks good on paper has to be good on the ice. New winger Simon Gagne has to stay healthy and spark Vincent Lecavalier’s resurgence. The new blue liners have to actually block the shots they’re being brought in to block. Marty St Louis has to earn the big money he resigned for by continuing his consistent consistency.

With that being said, the playoffs are not out of the question. Winning the division might be a stretch, but it’s not hard to picture the Lightning as one of the 8 best teams in the Eastern Conference. Now I could give you a standard pre-season preview of the team, but I’d rather not. Instead, over the next week I’ll post a couple of key storylines to watch during the season.

Hey Don’t Forget About Me! 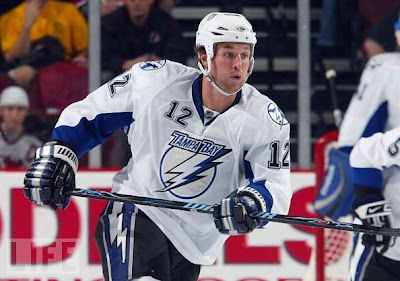 Let’s run down Ryan Malone’s off-season. He was rumored to be traded to Toronto for much of the summer. Then he lost his number to the Lightning’s shiniest new toy, Simon Gagne, and, oh by the way, lost his position on the right wing of Vincent Lecavalier’s line. With Guy Boucher’s system that last one might not mean that much as all of the forwards will rotate throughout the different positions during their shift. Still, it hasn’t been pretty for the Pittsburgh native who has scored a total of 47 goals for the Lightning in the last two season.

While much of the press has focused Steven Stamkos, Marty St Louis, Lecavalier, Gagne and Steve Downie, Malone has found himself as a bit of an afterthought. For someone who was tied for the team lead with 7 game winning goals last season that has to be a bitter pill to swallow.

He also seems to be an odd fit for Boucher’s puck pursuit style of offense. Malone isn’t the fastest skater. His defensive work can be questionable at best and he’s not the best passer on the team. What he does well is plant himself in front of the net and create havoc for other team’s goaltenders. With that he still has value. The rest of the offensive stars are “skills” guys. They benefit from having a grinder, a rock in front of the net to redirect shots or stuff home rebounds.

How much ice time he sees will be determined by his efforts on the ice. Based on the new players brought in, Malone won’t be seeing much time on the first power play unit. His spot on Lecavalier’s line could be at risk if one of the wingers on the third line shows a bit of tenacity (I’m looking at you Dana Tyrell). It will be interesting to see how he responds. Under the previous regime he was penciled into one of the top lines and left alone. Now he’ll have to show that he can keep pace with the rest of the offense.

If he does then the Lightning have a bonafide chance of boasting six 20 goal scorers. If they do that, then the playoffs should be assured. Two big ifs, but it’s going to be fun to watch them try.
Posted by Justin G. at 9:27 PM