The Season Preview Rolls On

Part II of the Lightning Season Preview. If you missed part I (how dare you!) click here : 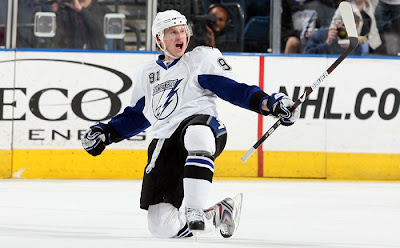 Oh Mr. Stamkos. You’ve had a good year haven’t you? Your first NHL trophy, your first scoring title, your first Vanity Fair photo shot, and you’ve won the hearts of Lightning fans all over the world. So what’s the reward for all of those kudos? How about your first no win situation.

If he scores 50 goals this year then it’s not that big of deal, one might say it’s even expected. After all, he’s going to have a stable line this year (or at least as stable as Guy Boucher’s system allows - which it sounds like might be as chaotic as the previous regime’s), the power play is already being touted as the best in the league and there is a coach that wants to play an up-tempo offensive style. Heck, he should score 70 this year!

If, for some reason, he doesn’t hit the magic mark then the cynics will wonder if last year was a fluke. If he scores 40, then the question will be why did he back track? God forbid if he doesn’t get at least 40. I guarantee that if he slumps coming out of the gate there will be at least one column penned about him being a “one year wonder”.

Honestly, at this point I don’t think he’ll net 50 goals. I do think he’ll be in the mid to high 40’s, but for all of the reason’s I mentioned in the second paragraph he won’t hit the magic number. Let’s face it, there are only so many goals to go around. Newcomer Simon Gagne will take his fare share on the power play as should Pavel Kubina. Since Vincent seems to have his head on straight look for him to tack on another 10 goals or so to his total.

Stamkos is now a marked man. Teams are going to start marking him a bit closer on the power play. All of the room that he had in that circle last year is going to rapidly diminish. He will be seeing more of the top defensive pairs as well so that’s going to hurt him during even strength play.

The good news is that he is still learning and growing stronger. Sometimes it’s hard to believe that he’s not even allowed to drink a beer in the U.S. yet. At 20 years-old he hasn’t developed into the player he’s going to be. There is so much more ahead of him. Right now he’s getting by on natural talent, once his knowledge increases, once he has a veteran’s understanding of how the game is played he will be truly dangerous.

So fans, don’t be hard on the young kid. Let him develop at his own pace. And if he scores 50 goals celebrate like you did last year.
Posted by Justin G. at 9:53 PM