Hey Look Who's Writing About Hockey Cards! This Guy!

Thanks to some budgeting, a couple of unexpected gift cards, a slightly better month on eBay, and countless brown bag lunches I was able to secure a new box of cards. On a beautiful October day in Chicago I took the CTA up to the Western stop to visit Tim’s Baseball Card shop. I’ve been a couple of times this year, but not since I’ve moved out on my own. The money just hasn’t been there to justify it until I scored big getting rid of a couple of cards (thanks Buster Posey!).

So I figured why not reinvest in a box of 2010-11 Panini Certified. The online reviews have been mostly positive, with the major concern being the number of parallels and inserts. Not a problem I thought, as a recent player collector convert I’d figure I’d score enough cards that didn’t matter to me to swap for new Lecavalier’s. Who knows, maybe I would finally pull a Vincent insert on my own.

Not only did I not get an insert, I didn’t even get a Vincent base cards. Not only did I not get a Vincent base cards, there was nary a current Lightning player to be found. Nor was there a Sidney or an Ovechkin or Datsyuk to be found. Sadly, for the Captain there was no PK Subban, nor was there a David Krecji for Shane. As a matter of fact I didn’t pull a single base card that I could trade with anyone.

That’s because I didn’t pull a single base card at all. 52 cards with 52 serial numbers stamped on the back. Apparently, I done got hot-boxed. That’s right, Panini knew I would be visiting Tim’s store today, sometime late in the afternoon. They knew that someone who had promised to pick up a box on Friday would not show up thus leaving me with the last box in the shop thereby guaranteeing I would be wowed and write up a great review. Those dastardly demons!

Actually it appears that one out of every eight boxes have been stuffed with nothing but parallels. There have been reports of some folks getting more than the estimated number of hits. It seems that either they have a whimsical sense of quality control or that Panini is splashing into the hockey market by giving their customers more than what they expect. Either way I’ll take it.

Despite the joy of opening an entire box of cards that had a limited production run I’m not overly wowed by the set on a whole. Of the 50 cards I pulled there were some nice ones, a lot of shiny ones and one or two that garnered a second glance. Yet I’m not going to be heart broken to part with any of them.

The tight photos on the player limit the variations of poses that you see so that after a couple of packs the images are almost redundant. Winger waiting for a pass, goalie playing the puck, defenseman waiting for a face off, etc. Not exactly the awe inspiring camera work that other sets put out there (UD regular for instance).

The inserts are plentiful and a little bit better. I’m a fan of the Masked Marvels. Anytime I get to see an overhead shot of a goalie making a save I’m happy, even if it’s tiny goalie. The Certified Champions would make a nice card to get hand signed, nothing beats a picture a player holding the cup and showing the ultimate joy.

Overall, I was happy with this box as it gives me plenty of fodder for trade or sale on the bay. Would I recommend it for purchase? I would, just know what you’re getting into. If you’re a set collector run from this box. It will drive you insane with all of the variations. Better to wait till someone else collates it and buy it from them.

Four hits per box for about $100 isn’t bad either. It seems to be breaking down the middle pretty much with two auto’s and two jerseys (that’s what I pulled) and there is the usual mix of good players and midline common skaters.

Now on with the crappy photos. 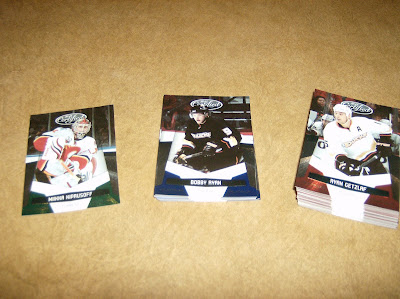 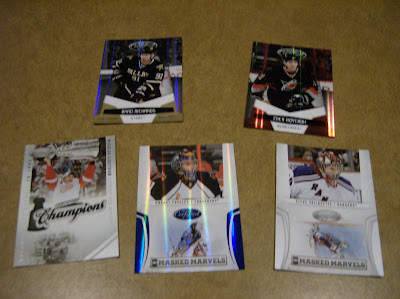 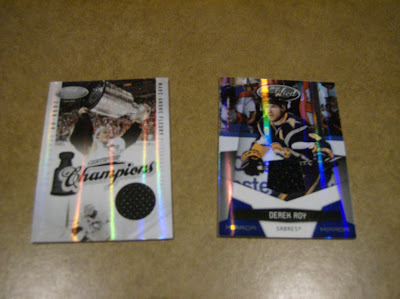 The Hit's Part One 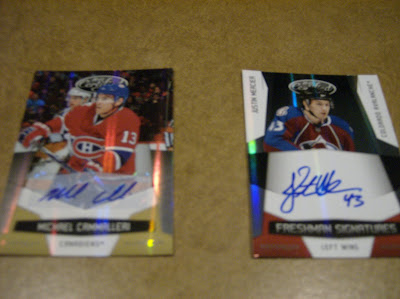 The Hopeful Chase Three Stars of the Box

I rate the box a second line winger. (again these rankings have no basis in reality).
Posted by Justin G. at 6:06 PM

Interesting, first I've seen of that set. Thanks for posting!

Liking the Roy. I've never been into Certified, but I'm slowly converting and thing about picking up a few Sabres Certified cards. Nice review/box break.