With all due respects to the Denver Broncos, there was another one-sided beating that took place in the sports world this past weekend. On Saturday, fast-rising middleweight Gennady Golovkin administered a clinical beating of Osumanu Adama and racked up his 16th consecutive knockout. Unfortunately not many people in America saw the latest conquest by “GGG” as HBO decided not to carry the fight.  Based on the result, the streak and the praise that the boxing world has heaped on the Kazakh I’m pretty sure that it’s the last Golovkin fight that they pass on.

Saturday afternoon’s (and I’m sure the 3.45pm east coast start time played a part in HBO’s decision) knockout didn’t have the awe-inspiring image of a vanquished opponent writhing in pain that Golovkin’s knockout of Matthew Macklin last June did.  In fact, the ref stopped the fight in the 7th round with Adama still on his feet. The quick (but correct) stoppage by Luis Pabon robbed Golovkin of a defining finish, but was totally in keeping with the nature of the fight. 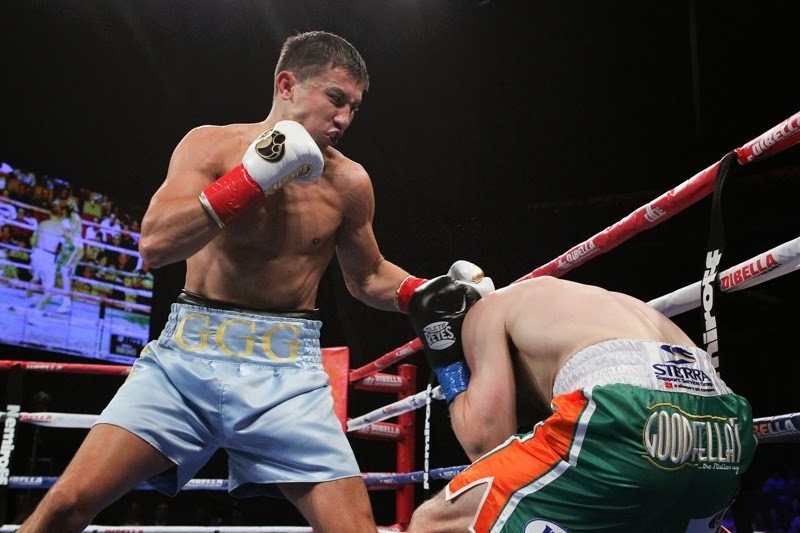 Osumanu Adama is a good fighter, he’s held a belt and his own against champions.  But outside of Chicago, where he trains, he isn’t a “name” fighter.  (Reason number two HBO passed I’m sure).  Adama, however, was a willing fighter.  He tried to take the action to Golovkin, tried to use his jab to keep the WBA/IBO Middleweight Champion off of him, tried to move around the ring and make “GGG” chase him.  He tried, but it wasn’t enough.

Even though Adama landed some clean punches they didn’t hurt Golovkin, and Adama's attempts to evade him were frequently cut off.  The 31-year-old man fighter from Kazakhstan was patient, waiting for his opportunity and then unleashed his trademark thundering punches when he had an opening.  Two of his three knockdowns of Adama came off of jabs, more accumulation of damage as opposed to any one thudding shots.

Adama wasn’t winning the fight. At the time of the knockout in the seventh round I had him trailing 59-53 on my scorecard and could have had it 50-52 (I gave him the third round when Golovkin didn’t seem interested in throwing any punches). The end came kind of suddenly. The seventh round starts off with Golovkin sneaking a left through Adama’s guard that drops him to a knee. Adama didn’t seem hurt, he had no problem meeting the ref’s count and comes out throwing some solid left hooks to the body. That works for about a minute and then Golovkin snaps a left hook that lands flush. The crowd oohs as Adama stumbles backwards. Golovkin casually wipes some sweat off his nose as Pabon rushes in to stop the fight. Just another knockout for The Kazakual Disaster.

Along with patience and power, efficiency runs rampant in Golovkin’s fights.  He doesn’t waste punches or movements.  While Manny Pacquiao at his best is an overwhelming blur of combinations, Golovkin gets the job done in simple two-or-three punch flurries. He has the deceptive speed of great athletes allowing him to be right where he needs to be, on balance, in order to unleash a vicious hook to the body or straight right to the face. Yet it never seems like he is particularly fast in the ring.  When the #fancystats people finally make their way to boxing “GGG” is going to be the defining example for whatever clever word they come up with to describe punching efficiency.   Every punch he throws seems targeted to do maximum damage.

With his Goldberg-like string of knockouts the number one question after this fight is “Who’s Next?”.  He has made it known that he wants to fight Sergio Martinez to decide the best current middleweight. Luckily for fans the promoters shouldn’t be able to screw this one up.  It’s only a matter of time (and health for Martinez) until this fight gets booked.  I’m thinking it headlines a pay-per-view sometime in the spring of 2015.

Unlike Floyd Mayweather, Golovkin likes to fight.  He had four bouts last year and plans on having at least four this year.  ESPN’s Dan Rafael mentions that Golovkin will headline HBO’s card in April at Madison Square Garden (the same venue that saw him stop Curtis Stevens with a punishing eight round beating) against an unnamed opponent.  According to Rafael, Golovkin is willing to fight anyone from 154 to 168 pounds which opens up a flood of contenders not named Mayweather.

Personally I’d like to see him fight someone with a little bit of power to see what kind of chin Golovkin has.  That is one thing that really hasn’t been tested. In his fights against Adama and Curtis Stevens, he has been hit. That happens when you come straight forward.  To see him in a real slugfest would be interesting to watch. Rafael mentions James Kirkland as a possibility and Andre Ward has called him out in the past year as well.  Julio Cesar Chavez, Jr.’s name has been bandied about and I could see HBO being very interested in making that a big-tent fight in the fall.  It could be a good fight for Golovkin in the sense that JCC is a “name” in the boxing world even if his talent doesn’t live up to his fame.  A decisive victory over a well-known opponent does a lot to drive ticket sales.

No matter who lines up against him from now on, you’ll be able to see it.  Which is a good thing for boxing.  With Mayweather and Pacquiao both heading off into the sunset, the sport needs new “much watch” fighters and Golovkin is one of those guys.