So what am I doing posting about cards on Thanksgiving? You know, the day where we’re supposed to turn the computers off, put the phones down and pass out on the couch during football with family?  Well, The Duchess is in Florida and I’m still in Chicago eating leftover pizza.  Welcome to the hospitality business!
After a long day at work (one in which I managed to talk my way into a six day work week with two overnight shifts) I figured a nice night with the Ravens game streamed online and a little blogging was the best way to spend the night.

How long has it been since I posted?  Well, Steven Stamkos has had surgery on his leg, left the hospital, ditched the crutches, ditched the protective boot and walked out onto the ice with barely a limp to present Marty St. Louis with a special gift in recognition of the captain’s 1000th game played.  It doesn’t appear that Stammer has been rehabbing outside.  Is it possible that he is getting paler? 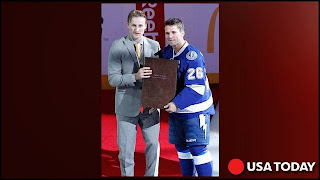 We’re not here to talk about hockey, though. We’re here to talk baseball cards and the bane of the collector’s world – redemptions.  In my history I’ve had pretty decent luck with redemptions; I don’t think I’ve waited more than 3 months in the past for the handful of cards that Topps or Upper Deck have sent out for me.

That was until September of 2012.  Remember that month?  The O’s were driving for the pennant and the Ravens were kicking off their Super Bowl winning season.  I was walking around half-awake due to the three overnight shifts a week I was working and the NHL was busy pissing off all of the fans they had left after the last lockout.

I was celebrating my birthday (and about to get married) when the Duchess’ parents bought me a box of Topps 2012 baseball.  It was a fun rip, nothing overly exciting except for one card – a Nolan Ryan Golden Greats auto/relic card. Or at least that’s what the redemption card said it would be.

Awesome.  I don’t necessarily collect Ryan cards, but it’s always nice to pick up a Hall of Famer’s autograph (especially when it comes to working out trades). So I submitted the online code and went on with my life (got married).  Then I promptly forgot about the redemption.

Over the next year or so I would read a post about someone redeeming a card and then remember I had a card sitting out there. After taking 15 minutes to remember which password I used for the site I would log on and find the always infuriating, “Pending” in the status field.

Since I basically got the card for free and I’m tremendously lazy I let a year go by before doing anything about it. Last September I dug up the customer service line and gave them a jingle. After about 15 minutes on line (8 of those with David Wright telling me that Topps is on Facebook) I spoke with a rep who looked up the real status of the card.

Really wish David Wright would stop interrupting "Me, Myself and I" on the Topps hold line.
— Torch Ramrod (@torchramrod) September 26, 2013

Apparently Topps is having an issue getting an authentic jersey to cut up for cards. I guess they’re not having any luck on their eBay auctions.  I’m a flexible guy so I told them I would roll the dice and take the replacement of “equal value”.  No problem, the chap on the other line said, I should see my card in 4-6 weeks.

Needless to say I didn’t.

So, another call to Topps.  At first they asked if I wanted a replacement. I told them I already set that up. They said, “oh yeah” and gave me a tracking number. I tracked it the number and it said, “Return to Sender.”

So, what had happened was…..

In October I had received a notice that the post office wasn’t able to deliver something to me.  No information other than the tag number.  I set up a redeliver and waived the signature needed.  Put the card out so the mailman could pick it up and then went the extra step to set up an online redelivery confirmation as well. I even saved the email confirmation.

Promptly forgot about it.

For some reason the post office didn’t get either notice so they were waiting for me to pick it up at their location. The location that is conveniently open from 9am to 5pm during the week.  Otherwise known as the same hours that I work (hence the reason I wanted it redelivered).

After 30 days they sent it back to Topps.  I noticed the package was at one of their sorting facilities in Pennsylvania so I called the United Postal Service to see if they could route it back to me.

I will never (EVVVVVVVEEEERRRR) do that again. I can’t stress that enough. If you’re ever in a situation where you have to call the postal service or not get something delivered – give up on the

On hold for 15 minutes.  The first agent said no problem let me get you to that department.  Which is apparently code for hanging up on me.

Called back, waited on hold for another 25 minutes and got through to someone who basically told me I was short on luck. She kept asking me why I didn’t pick it up, I kept telling her because I had set up redelivery. She asked for the confirmation on the redelivery. I gave it to her. She said that number didn’t “exist”.  I told her I could forward her the email showing that it did indeed exist. She declined and asked if I wanted to open a complaint.  I asked if that would help me get my package re-routed to me.  She said no.

I thanked her and asked to speak to a supervisor.  She connected me.  The supervisor gave me the same story and said it was too late to re-route. I kept pointing out that it was in their facility, surely in this day in age she could contact someone there and have it sent back to me. She said no and said that if I had just picked it up we wouldn’t be having this conversation so it was basically my fault.

One thing about the digital/cell phone era is that hanging up on someone is nowhere near as satisfying as it used to be. Clicking a button has nothing on slamming a handset down.

I calmed down a bit and called Topps again.  I spoke with a nice gentleman named Vincent (I think) who said he would set up a note to return to sender the return to sender once it hit their receiving warehouse. He did mention that they couldn’t waive the signature fee due to the “value” of what they were sending out.  That made me giddy.

About two weeks later I received a call on my cell phone (which is linked to the call box outside of my apartment) and a delivery guy said he had something to drop off.  I said go ahead (thinking it was some stuff The Duchess had ordered online) and once again forgot about it.  When I got home there was a lovely padded envelope waiting for me containing not one, but TWO cards.
And here they are: 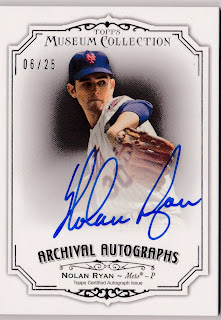 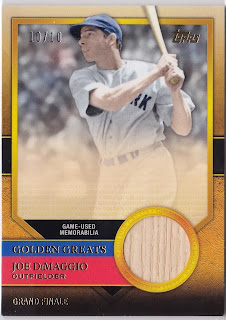 Umm I would say that was of equal value. (Worth reading the 1200 words it took to get to the payoff, eh?)
So Topps I take back whatever I said on Twitter that made you block me. Your customer service did a good job of taking care of me as a consumer.

Hope everyone had a great Thanksgiving.
Posted by Justin G. at 10:05 PM

I need some redemptions that are hard to file. Man, you struck gold and then some.

Kudos to the Topps Redemption Department... and a huge Congratulations to you. Those cards are awesome!