So how about that Gennady Golovkin?  That’s the big story in sports since the last time I posted right?  Of course not, the big news is Steven Stamkos and his now surgically-repaired right tibia. It’s been three days since Stamkos broke his leg in Boston and I think I am know ready to process it. 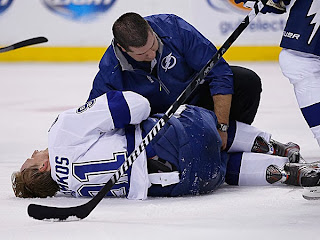 I found out about the injury in a truly 21st century way.  I was at work, stuck behind a computer doing mindless data entry work (the type of work that I got into the hospitality business to avoid) when my cell phone blew up.  Not with phone calls, but with Twitter notifications, texts and e-mails.  I immediately gave myself a 15-minute break (a perk of being a “leader”) and read through my timeline.

For the past four seasons Stamkos has been the best goal-scorer in the NHL.  He might not have been the best overall player, but by far the best pure scorer of goals.  We, as Lightning fans, were happy to have him, happy to be able to watch him play 81 times a season.

This season he had turned it up a notch. With 14 goals and 23 points through 17 games he was on pace for his best season ever. Seventy goals was a distinct possibility despite the fact that he didn’t score his first until the fourth game of the season.  The goals he was scoring were from all over the ice.  Deflections, rebounds, snipes from the circle and crazy, toe-drag wristers were all going in for him.

He was more aggressive on the ice, charging into the offensive zone with the puck often going one-on-one or even one-on-two against the defense.  He was shooting the puck instead of deferring and 23% of the time he got the puck on net, the play ended with the goalie digging it out from behind him.

So I feel bad for him as a player.  At 23-years-old he’s entering into what should be the prime of his career and now the progress on hold.  I’m not worried about what level he is going to come back.  As gruesome as they are at a time, broken bones tend to be easier to overcome than pulled muscles or torn tendons.

If anything, the team is going to have to have the Markham-native slow down in his rehab. I’m sure he’s already spoken with his offseason workout guru, Gary Roberts, and they have a plan for getting him back on the ice. Stamkos’ is one of the hardest working players off the ice and he will be motivated to get back as soon as possible.  Whispers of him making it back in time for the Olympics are already making the rounds, which would put him back in a Lightning uniform towards the end of February, in time for a playoff run. 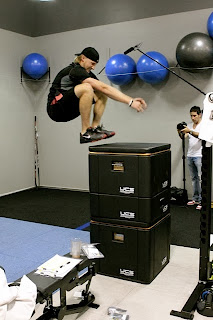 General Manager (of the Lightning AND Team Canada) Steve Yzerman is already on record stating that he is not going to rush the dynamic forward back.  He doesn’t seem the type of guy to succumb to pressure from outside influences so I doubt the Canadian media will force him to change his mind.  Luckily for that nation they’re quite deep in the center position.

The Lightning, not so much.  However, this is why he stockpiled young offense talent over the last few years.  Both Tyler Johnson and Alex Killorn had more than 20 minutes of ice time in the Lightning’s 2-1 overtime win against Montreal on Tuesday.  A lot will be asked from those two, as well as Valterri Filppula, over the next three months as it is unlikely that Mr. Yzerman will go outside of the organization for help.

Lightning fans that have been around for more than a decade might remember a dark day (actually it was probably sunny and mild in Tampa) in January 2002 when a rookie defenseman for the Pittsburgh Penguin named Josef Melichar shoved a young Marty St. Louis into the boards and the diminutive forward suffered a broken fibula.  He recovered quite well from that I would say.

So I am not worried about how Stamkos will perform when he returns, whether it is in February or October of 2014. The injury does, however, open him up to a nice “what if” discussion.  It’s a discussion I’ve gotten into with Link in regards to Sidney Crosby. I’ve speculated that Crosby might be the greatest “what if” athlete of the early 21st century.  As in, what would his career look like if he hadn’t missed so much time over the last few years because of his injuries? Could he have challenged for 600 goals? Could he have been the 2nd best scorer of all time?  Even if he plays at a hall-of-fame level for the next 10 years there will still be the 60-70 game gap in his career when he was sitting in a dark room pondering his future and not on the ices scoring goals. 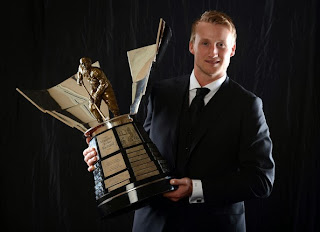 That’s what I take away from the Stamkos injury (that and nothing good happens in Boston). Also, the outpouring of support from all around the league for him was truly great to see.  If there is any player in the league that is universally liked by fans of all teams it is Stamkos. Probably because the Lightning have no natural rival, thus no fan base that is predisposed to not like players on the team, the injury garnered few if any mean spirited comments on the articles posted about him.  That’s really nice to see.

Stamkos will be back and, hopefully like Obi Wan he’ll be more powerful than we can possible imagine, sooner than we know.  The Lightning will adjust (In Ben Bishop We Trust) and hopefully stay in contention till then.  Sadly, I don’t think the “Then You Feel Shame” squad will be able to survive, but my fantasy worries are low in the grand scheme of things.
Posted by Justin G. at 5:57 PM

1st thought - another "hockey play" push from behind by a Bruin resulting in a horrible injury
2nd thought - Crap, we need him on Team Canada
3rd thought - glad I took Ovechkin over him in my hockey pool
4th thought - crap, Tampa plays Montreal the next night and they are going to be PUMPED to show they can play without Stammer.

I had the same first thought you had, what a shame. He's always been near the top of my "favorite players that don't play for your team" list. An absolute scoring machine, and in addition to being on pace for a career best offensive year other aspects of his game are improving as well. Can't wait for his return, just like Crosby this is bad for all fans of the game in general.