That's right, the only time that's better than T-Shirt Time is mailbag time.  So let's delve into what Mr. Postman delivered this week.

We have a padded envelope from Mr. San Jose Fuji!  I unloaded a San Jose Sharks relic card that was collecting some dust on my desk and in return he knocked off a couple of want list cards.  Let's see what he sent: 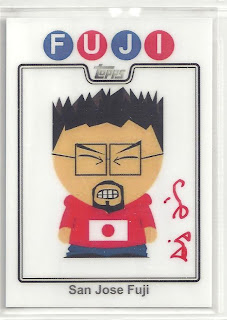 First Up - the greatest calling card of all time. 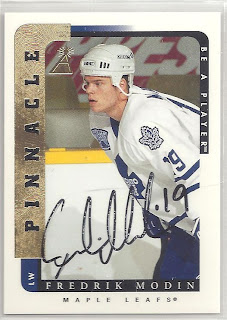 Next - an autographed Fredrik Modin Be A Player card.  This is the main card I was looking for as it will contribute greatly to my double secret probation wantlist. Modin is definitely one of the most missed Lightning players from the Cup era.

A trio of Murray cards that I needed. Love the oddball sets from Kaybee and Woolworth. Top it off with a Members Only Stadium Club and I'm happy. For those keeping track, once card with double gloves and two with no batting gloves.

Not a card, but part of a card set.  It's a little, bitty Vinny jersey.  From the 2007-08 Upper Deck Mini Jersey set.  I busted one pack of this product and pulled a Mike Modano jersey, which I think I still have somewhere. 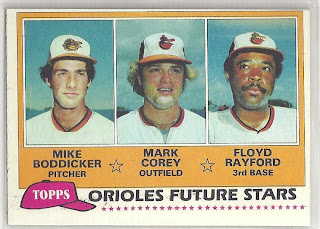 The card I specifically requested and forced Fuji to go hunting in his archives for- the 1981 Floyd Rayford rookie card.  Boom! That guy on the left had a pretty good career for the birds as well. Mark Corey, unfortunately, did not.  He appeared in 59 games over three seasons (1979-81) and hit .211.  He did hit one major league home run - so he can tell his grand kids that!

Justin... received your package today. I'll write up a trade recap on my blog tomorrow. Thanks again for the awesome trade... love that triple Sharks jersey.