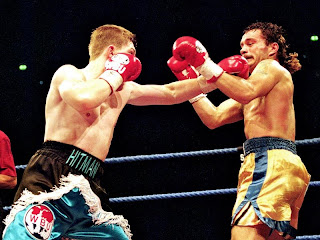 Lost amidst the bean ball wars in Boston, the improbable US victory in Germany, the release of this year's Allen & Ginter, and the ongoing Stamkos dilemma, a boxer quietly retired in England. Ricky Hatton, once thought a challenger to Manny and Mayweather hung up his gloves for good. Coupled with the unmasking of heavyweight David Haye on the weekend prior, it wasn’t a good seven days for English boxing, but hey at least they still have Tyson Fury!

Hatton, “The Hitman” who wasn‘t Tommy Hearns, hasn’t fought since 2009. Unfortunately, the most recent news of the former welterweight champion was for entering rehab instead of the ring. His struggle with substance abuse and lackluster performance in his final two matches dull the shine of what was a rather brilliant boxing career. A career that would span 47 professional matches, 45 of those he won, and of those 45 wins 32 by way of knockout. He wasn’t a hall of famer, but damn it he was fun in the ring.

There is a moment in his fight with Kostya Tszyu, where after suffering several low blows from the rat-tailed Russian, Hatton proceeds to deliver one of his own. Instead of complaining to referee Dave Parris he took matters into his own hands. Well, at least into one hand as he delivered a perfect left hook right on the cup of his opponent. The ref warned him, but the message was sent. Tszyu never attempted another questionable punch.

That night, that fight in Manchester was probably the pinnacle of Hatton‘s career. It was the 38th win in his career, and the most important because it made him known across the Atlantic and opened up an opportunity beyond the light welterweight division. Despite being undefeated in that weight class, in 2007 he decided to bump up in weight (never a problem for Hatton) to the welterweight division to take on Floyd Mayweather for the WBC title. In hindsight it probably wasn’t the best career choice.

Hatton entered the ring serenaded by his passionate fans. Despite looking a little puffy, he pressed the action against the champion, determined to prove that he could bully his fleet-footed challenger. He forced Floyd to fight him on his terms, not allowing the slicker Mayweather his customary running room. Through the early rounds things seemed to be going “The Hitman’s” way. He was landing big shots against the champion, something few boxers are able to do against the elusive boxer. Yet, the Brit’s straight forward style was also opening himself to vicious counterpunches from Mayweather.

In the 10th round, those counters would prove to be Ricky’s undoing. A devastating left hook from Mayweather would send him to the canvas. He was able to beat the count, but “Pretty Boy” Floyd sensed blood and poured on the onslaught. After landing several damaging combinations, referee Joe Cortez stepped in and called the fight.

The perfect record was gone, but American fans embraced the fallen fighter. After all, who wanted to see a fighter dance around the ring for 12 rounds (as Mayweather was wont to do)? Hatton’s straight forward style and easy going nature was a perfect combination. Something that his hometown fans had known for a long time.

What great fans they were. After the Mayweather fight, a rumor circulated that the traveling caravan of British fight enthusiasts had drunk Vegas dry. In the end, more reliable reports stated that they had cleaned out the MGM’s stock of beer, not the whole Strips, and it was quickly replenished. But still, what an accomplishment! His crowds weren’t quiet, respectable celebrities in tuxes and gowns, growing noisy only at the moment of a knockout. Rather they were the working class folks who chanted football-esque anthems at their hero. 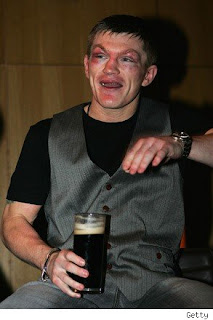 Therein lies the appeal of Ricky Hatton. If there ever was a people’s champion it was him. A boxer whose favorite sports team is his hometown club Manchester City (that’s like a New Yorker choosing the Mets over the Yankees), who regularly is seen a local pub drinking with common folk and playing darts and isn’t afraid to mock himself (he’s appeared in fat suits as “Ricky Fatton” in response to claims about his weight gains between fights).

Perhaps it’s due to the relative late worldwide popularity. Most of his career he fought in relative obscurity rarely fighting outside of his native England. His fight with Tszyu came almost eight years into his professional career, a lifetime for most boxers.

Following the loss to Mayweather, Hatton would move back down to 140lbs for his next two fights taking out Juan Lazcano in an unanimous decision and then TKO’ing Paul Malignaggi. Those two wins would set up his next super match against the red-hot Manny Pacquiao in May of 2009.

This was to be power vs. power. Pacquiao, needed to win to cement his place as Mayweather’s number one challenger. Hatton needed it to prove he was back. In the end, his straight forward brawling approach was no match for the quicker and stronger Filipino. In less than two rounds it was over, Pacquiao’s trademark left hook leaving Hatton on the canvas unable to beat the count. The beating, probably the worst six minutes of Hatton’s career, was so severe that the former champ spent the night in the hospital to ensure no permanent damage was done.

There might not have been any lingering physical injuries, but apparently the mental ones never healed. Never one to say no to a pint or two Hatton’s drinking reached new levels. There was also reports of regular cocaine use. A little more than a year after his fight with Pacquiao, Hatton entered rehab for help with depression and alcohol abuse.

In a profession where boxers fight well into their late 40’s it’s not impossible that Ricky Hatton will un-retire. It’s hard for a fighter to end his last fight on his back, even if it is in a loss to one of the best fighters the world has ever seen. Hopefully, he the pain of that loss and the one to Mayweather fade away and are replaced by the echos of his adoring fans crying out,

There’s only one Ricky Hatton,
One Ricky Hatton.
Walking along,
Singing a song,
Walking in a Hatton Wonderland
Posted by Justin G. at 11:59 AM