I'm currently on vacation in Florida. Hanging out with some family and have a ticket to Game Four of the Eastern Conference Finals between the Tampa Bay Lightning and New York Rangers. Other than the fact that I forgot how much fun it is to do anything in humidity, it's a nice relaxing break from my, well, not so stressful regular life.

While on some errands we stopped at a Wal-Greens and they happened to have some cards behind the counter. So, on a whim, I picked up a blaster of 2022 Topps Heritage. I have no plans of collecting this set. I wasn't even going to go out of my way to get the Orioles out of the set (already grabbed one of the Ryan Mountcastle relic cards from a dollar box). So consider all of these cards available for sale (unless of course I pull something that I really, really want).

Let's see how we did with Pack Number 1 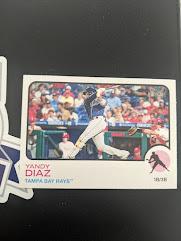 How appropriate. I'm in the Tampa area and the first card pulled is a Ray. 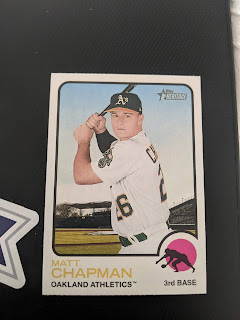 In the grand tradition of Heritage as an early season release, Chapman is pictured as an Oakland A. He was traded to the Blue Jays on March 16th, so there is an outside chance he is pictured in his Toronto uniform in the extended series release. 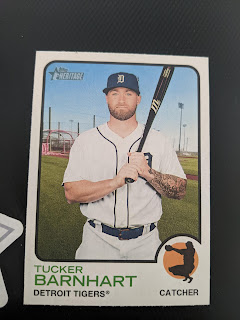 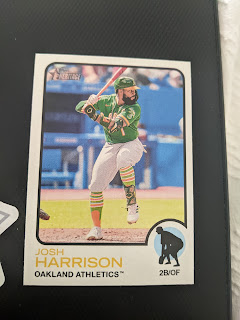 Harrison had a brief stay in Oakland as he was part of a deadline deal between the Nationals and A's. He finished out the season there before signing with the Chicago White Sox in the off-season. 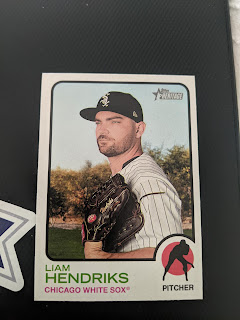 Speaking of the Southsiders, Liam Hendricks is next up. Unlike some of the previous players in this pack, Hendricks is off to a strong start in 2022 with a league-leading 16 saves. 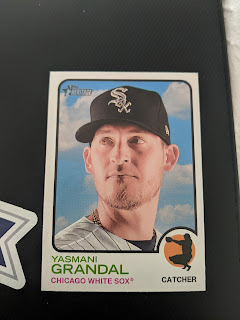 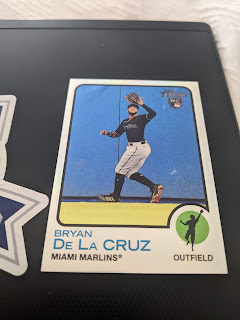 Hey now, a retail hit! According to the back of the wrapper these refractors come 1:176 per pack in the blasters. It ain't sexy, but I'll take it. Love me some shiny cards. In his second year with the Marlins, De La Cruz is playing part time, but has put up 8 stolen bases in 37 games. After working his way up through the Astros organization De La Cruz was traded to the Marlins in 2021 and had a pretty decent rookie campaign. 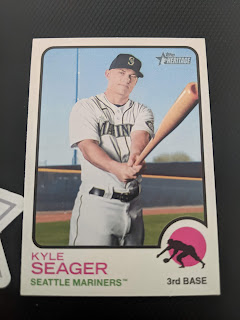 We follow that card up with our first retired player card. Seager announced his retirement in December of 2021 after an 11-season career with the Seattle Mariners. In nine of those seasons he posted 20+ homeuns and finished with 242 in his career. A nice solid career. 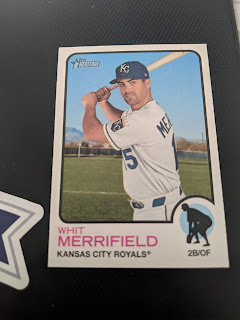 I'm pretty sure Merrifield is the active leader in trade rumors per season in the league. It seems every summer the Royals infielder is involved in speculation that has him getting moved to a contender. As of now he hasn't moved and continues to be a steady performer in the middle of the field for Kansas City. Not sure if you know this, but he's led the American League in stolen bases three times in his career and is currently ranked 14th among active players with 166.

That's pack number one. We'll be back tomorrow with the next one. If you see anything you like, hit me up in the comments.

Glad Topps made a card of Harrison with the A's. In a few years, that's going to be the only thing to help me remember his time with the team.

Fuji - based on the checklist, there are a lot of Orioles that are like that as well. It's always nice when the card companies capture players that have short tenures for random teams (i.e. Vlad Sr. with the O's).