Slipped a little behind in these posts. The O's really need to stop winning on Sunday's and Monday's when I'm working. John Means pitched the O's to victory on Sunday as they snapped Oakland's long winning streak. Good for Means who is pitching like a true ace this season. He's definitely found the right mix between his 93-94 MPH fastball and his change-up. He can still dial it up to 96 if he needs to, but is so much more effective at 93.

On Monday, I had a couple of packages in the mail and one of them was from loyal reader Chris, aka hockeydude over at TCDB. He had reached out to help take some cards off of my hands in exchange for some O's and Lightning cards. One of them is the Davey Johnson card above, a nice parallel from a fun set Topps released back in 2005 highlighting all of their Rookie Cup winners. Those cards found their way into a lot of repack blasters back when I was buying those. 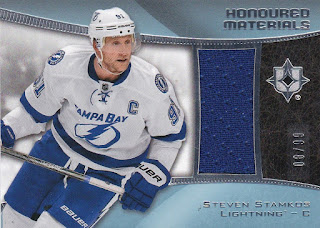 That may be the first memorabilia/relic card I've picked up through a TCDB trade. The serial number (8) also ties in nicely with my daily post over at Raw Charge today. Many thanks to Chris, check his blog out over at The Collector.

Along with the padded envelope from Chris, there was another one chock full of Lightning and Orioles cards/stickers. It was a rather large trade that knocked out some cards on my Eddie Murray and Vincent Lecavalier collections so I figured it would be a good time to see how all of my so-called collecting goals are going.

According to TCDB (in which I have about 98% of my cards currently logged) it looks like I have 109,762 cards jammed into the bedroom closet. That's not too bad. I figure I've added about 1,315 cards this year so far so the collection isn't growing that fast, but is redistributing rather nicely.

It looks like I am up to 6,044 unique Orioles cards with 366 Eddie Murray cards. That is roughly 7.4% of the Murray cards in the database and puts me 11th among collectors on the site among the Murray rankings. I'm only 7 cards away from cracking the top 10 at the moment and hopefully with a little focus I can hit it in the next month or so.

Despite being one of my top PC players, he's not the number one Oriole on my list. That belongs to Cal Ripken, Jr, currently sitting at 493 cards. Part of the reason is that Ripken has a few box sets out there that I've picked up over the past year. Also, he was part of the Project 2020 series from Topps last year and I acquired roughly half of those cards so far.

Over all I am 16th in regards to O's cards with a shot at moving up a few spots once a couple of trades come through.

On the hockey side I have 2,675 Lightning cards (with the Crunch second on the list at 50 cards). That's good for 6th on TCDB's ranking page. While I might not overtake the lead this year I do want to get close to 3,000. I just moved the collecting to a 3,200 count box so it would be great to fill that up.

Lecavalier is the leader in my collection with 339 unique cards (Steven Stamkos is second at 169). I'm at 8.7% of the cards listed for Vinny4 which means there is plenty of opportunity to find cards in trades. I am second on the website in regards to Lecavalier cards, currently trailing the leader by 35 cards. I really have to buckle down and find trades for him for the rest of the year.

So that's where I'm at right now. Thank you to Chris and everyone else who has sent me their unwanted Lightning and Oriole cards!

I actually did pull that Davey Johnson from a repack, in a way. It was in a 'mystery pack' from Baseballcardstore.ca.

Your player PC total are very impressive! Happy I could help add to them a little bit. Thanks again for the trade! I'll have to read your stuff over at Raw Charge.