As I mentioned a few months ago, it’s time to pare down the collection.  So I’ve been trolling other blogs and wantlists to see who needs some of the cardboard I’ve acquired over the last 30 years.  Somehow (it might have been Twitter) I stumbled across CrazieJoe’s Card Corner. He’s in Canada.  He likes the Toronto Maple Leafs.  I happened to be sorting through some hockey at the time and noticed I had some cards on his wantlist.  He had some cards I needed.  It was a match.

It was also the first trade I completed through The Trading Card Database.  With Zistle on life support, I’ve been searching for a new place to keep things organized.  I had signed up at TTCD about three months ago, but hadn’t really entered any cards, mostly because I was dreading having to import my collection over and re-enter it by hand.

With Joe having his want/trade lists on TTCD I finally had a reason to invest some time playing around with the site.  After a couple of days my initial review is...it’s ok.  Zistle has a little better interface for organizing, but the trade function on TTCD is a little easier to use once you have your collection entered.

Enough about that, what goodies came my way from our neighbors to the north in exchange for a stack of Maple Leaf cards?  How about some 26-year-old cardboard?  That’s right, it’s 1991 Donruss.  A set old enough now that it should be showing up as a “retro” insert set at some point.  Among the 14 cards here are some highlights. 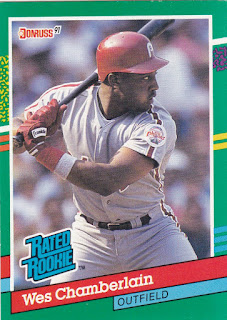 Wes Chamberlin. As far as a prospect, Chamberlin never lived up to the hype that a Rated Rookie logo usually inspires.  He lasted for five seasons and appeared in 385 games for the Phillies and Red Sox. 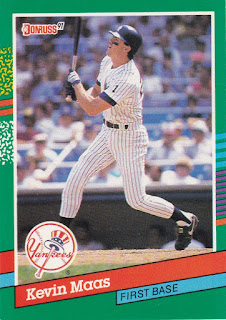 Kevin Maas.  Before there was Aaron Judge there was Kevin Maas.  A mid-season callup in 1990, the California native mashed 15 home runs in his first 133 at-bats. He ended the season with 21 home runs and enough votes to finish second in Rookie of the Year voting behind Sandy Alomar, Jr despite not making his major league debut until June 29th. 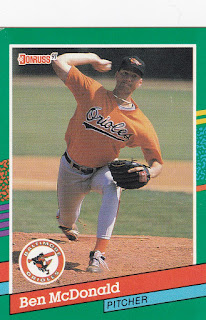 Ben McDonald.  The Orioles drafted him first overall in 1989 (their reward for the disastrous 1988) and he shot through the minor leagues. He actually debuted the same year he was drafted as he was part of the September call-ups during Baltimore’s improbable pennant race. He struggled out of the bullpen, giving up runs in each of his first four appearances.

Due to injuries and mismanagement by the ballclub, he never materialized into the dominant starter the O’s had hoped he would be. After 7 up-and-down seasons in Baltimore he left as a free agent and ended his major league career in Milwaukee. His relaxing Louisiana drawl can now be heard occasionally on Orioles broadcasts as he sometimes fills in as an analyst.

So why 1991 Donruss?  Because it’s time to finish off some of my childhood sets. I’ve knocked out 1983 Topps, pretty sure I’m done or close to being done with 1991 Topps so it’s time to turn my attention to some other sets from that era.  It was when I was collecting the heaviest so I shouldn’t have too many...OH MY GOD HOW DO I NEED 300 CARDS FROM THIS SET?

Well...that makes it a little more challenging, but I’m off to a decent start and I see these cards at shows all the time in the cheap boxes.  It shouldn’t be hard to knock it out.

Check the wantlist on the right side of this screen and if you’re digging for baseball cards from the same era just let me know.  (My apologies to the hockey collectors, those cards are taking quite a bit longer to organize than I anticipated).

Thanks for the trade Joe, your cards are making their way up to Canada.
Posted by Justin G. at 11:37 PM

Glad for the trade, and thank you again for reaching out!