Alvarez vs. Chavez - More Than a Convenient Narrative

Boxing is a wonderful sport to cover for a lot of reasons.  One of those reasons - plenty of time to find (or create) a narrative for the big matches.  Headline contests are usually announced months before they happen so that the two contestants have enough time to recover from their previous bouts and to prepare for their new opponents. It also allows the scribes following the fights plenty of time to find their angles on how to cover a fight.


Cassius Clay vs. Sonny Liston - The Loudmouth Showman vs. The Angriest Man in the World.


Many times those narratives are true, but often they are built to sell tickets.  After all, who wants to see two guys who like each other fight. Based on all of Timothy Bradley’s pay-per-views - no one.


Fights are more interesting when there is a story driving them. Luckily, this weekend there is a tailor-made storyline.  On May 6th, in Las Vegas, the battle for the soul of the Mexican boxing fan will be fought.  At least that’s what the promoters and writers would lead fans to believe. 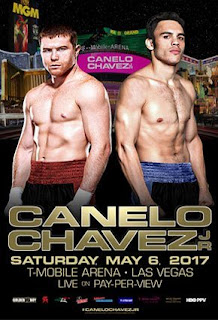 In one corner, Julio Cesar Chavez, Jr., progeny and prisoner of his father’s legacy.  A talented boxer who mixes flashes of brilliance with periods of sullen indifference. While gifted he seemingly lacks the one thing we’re told is most revered in Mexican boxers - the warrior spirit.


In the other corner, Saul “Canelo” Alvarez.  A beast of a middleweight. A powerful boxer who throws all his punches with the illest of intentions. He stands in front of his opponents and slugs it out. There is little obvious finesse in his game, just raw power.  Yet, while he demolishes all of those placed in front of him, there is a sense of artifice surrounding him. His detractors claim that he is a TV champion, racking up knockouts and wins against has-beens and never-will-bes while avoiding the one true test - Golovkin.


These are the two men that HBO, Golden Boy Productions, and Corona want us to believe are fighting to become the next great Mexican champion, to take up the mantle of Juan Manuel Marquez, Marco Antonio Barrera, Carlos Zarate and Julio Cesar Chavez, Sr. Is it fair to either fighter stepping into the ring to have that kind of pressure added to the fight? Was the fight between Keith Thurman and Shawn Porter a contest for the legacy of Sugar Ray Leonard and Thomas Hearns?


No.  Then again, not much about boxing is fair.  If they want to cash the multi-million dollar paychecks (Alvarez is reported to be guaranteed $8 million and Chavez, Jr. $2.5 million) that they will be earning for the fight, then they have to take on a little extra pressure. The questions is, will it matter to boxing fans, Mexican or otherwise?


Chavez, Jr. has much more to gain from this fight than Alvarez.  With a victory he can shed the lackadaisical label that has followed him over his 54-fight professional career. Gone would be the questions about his training habits or his failed drug tests.* Even a long, bloody decision loss could gain him supporters.  As long as he ends the fight on his feet and doesn’t dance around the ring for 36 minutes he will gain respect, much in the same way a too-young Alvarez gained respect in his loss to Mayweather, Jr. 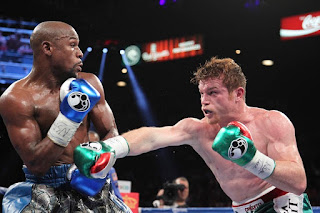 On the other hand Alvarez, he of the cinnamon-tinged hair and Sylvester Stallone commercials is in a bit of a bind.  While this is a good sell for the Cinco de Mayo weekend, it’s not the fight that people really want to see.  They want Canelo vs. Triple-G. Especially now that Golovkin struggled, in the sense that he didn’t render Jacobs incapable of movement for 10 seconds, in his last fight.That tint of vulnerability makes for an intriguing future match-up.  That’s the mega-fight that will get the ever-elusive casual sports fan to plunk down $70 for a pay-per-view.


So, while another notch on his championship belt and the subjective King of Mexican Boxing label would be nice, he stands to lose much, much more than this challenger.  A loss would most likely delay, if not completely, derail negotiations for an Alvarez/Golovkin fight, it would it also prove all of his doubters right.  He’d be unmasked as a made-for-pay-per-view matinee idol. Or at least that’s how it would be spun.


Oddly enough, Alvarez’s promoter, Oscar De La Hoya faced the same problem almost 20 years ago. The Golden Boy faced many of the same criticisms that Alvarez does today.  It took two bloody beatings of Julio Cesar Chavez, Sr. to earn some credibility from a lot of Mexican fans.


Adding to the storyline is the subplot that neither fighter particularly cares for the other. Alvarez feels that Chavez, Jr. has disrespected him his entire career (see this post from 2011 where Chavez, Jr. basically says that Alvarez hasn’t earned his respect). Promoter Oscar De La Hoya has done more than his fair share of selling the animosity. For example, he told the Las Vegas Review-Journal,


““There’s animosity toward each other. I can’t really explain it. There’s a lot of pride at stake. They have many years around each other, and you have to go back. Something happened. I don’t know if Chavez triggered it or Canelo triggered it, but they don’t like each other. They genuinely despise each other.”


If there is actual substance behind all of this talk, it could make for a great fight.  Pride is a powerful motivator.  Fighting for something other than a paycheck (which both fighters briefly agreed to bet on the outcome before cooler heads nixed the idea) can keep a fighter going when there is nothing left.  The thought of earning the mantel of his father’s legacy could drive Chavez, Jr. to keep going when normally he would throw in the towel. 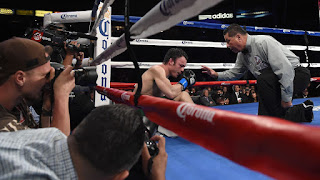 Could it happen? Of course.  Despite being the heavy favorite, it will be one of the few times that Alvarez won’t be the bigger man in the ring. Chavez has brought in legendary trainer Nacho Beristain to change his preparation. Reports out of his camp are that he is in great shape and has been dedicated to training, something that hasn’t always been the case.


His weight issues in the past have been such a problem in the past that for this fight a clause was inserted in the contract fining either fighter a million dollars for each pound they are over the 164 ½ catchweight.The public seems to think he has a chance, he started as 10-1 underdog and has seen the odds creep into his favor as he was 6-1 underdog as of Wednesday.


Alvarez doesn’t exactly dodge a lot of punches.  He walks through punches in order to land his own, relying on his power to win out during the exchanges.  That works when fighting smaller opponents, but he’s going to be in a ring with a fighter who may weigh up to 175 or 180 pounds on the day of the fight.


Chavez Jr., will be the one to dictate the style of the fight. Does he sacrifice his reach advantage to get in close and wear Alvarez down by leaning on him? Or does he keep his distance, force the champion to chase him and then pepper him with counter-rights and left-hooks to the body? Either way it should be a good fight style-wise. Neither man is afraid to stand in the middle of the ring and slug it out. The only thing that could throw a wrench into the match is Chavez, Jr.’s mental state.


Will he be the fighter who absorbed a beating from Sergio Martinez for 11 rounds before almost pulling off a miracle comeback by knocking down the Argentine in the final round?  Or will it be the Chavez who quit on his stool after being knocked around by Andrzej Fonfara. That’s the story that’s waiting to be written, and it won’t be known until the first punches are landed on Saturday night.

*Following his 2013 loss to Sergio Martinez he was fined and suspended for nine months after testing positive for marijuana. Which, honestly, is one of the dumbest things that boxing tests for. If any athletes should be allowed to smoke weed it’s boxers and football players)
Posted by Justin G. at 8:59 PM