Welcome Back Yanni and Who is Going to Be on a Hockey Card?

There was a blip of news in the Lightning world today as the club announced they were signing forward Yanni Gourde to a one-year, two-way deal. It's not quite the same as if, say Nikita Kucherov signed a deal, but it's still something. Mr. Yzerman brought back a player who was familiar with the system and should have a nice role in Syracuse with the occasional call up to Tampa Bay.

Gourde did pick up two games of NHL experience along with an assist last season when the Lightning forwards were ravaged by injury. He caught a bit of the bug as well as he suffered an injury to his finger during his two game stint with the club before being sent back to Syracuse.

He had a solid year in the AHL racking up 44 points, but not good enough to make the Black Aces Squad for the post-season. The Lightning did tender him an offer to retain his rights earlier this off-season and wrapped it up with the contract on Monday. He has an uphill battle to make the Lightning in training camp, but he will be a leader in what will hopefully a competitive Crunch squad.

That's nice and everything, but if Gourde is playing significant minutes for the Lightning, something has gone wrong. However, I did think that it solved something that has been bothering me all summer. Who would be the Lightning's representative in Upper Deck's Young Guns collection this year.

For those of you who may not be aware, every year Upper Deck releases their flagship product in two series. Series one usually rolls out in November and features six or seven veteran players from each team. The final 50 cards (well 49 and a checklist) are all rookies and have the Young Guns logo splashed across the card. As these are usually seeded about one in every four pack they aren't the easiest cards to obatin, thus they are usually one of the more sought cards for highend players.

For instance Connor McDavid's version from last year is selling for between $130 and $150 on eBay right now. Steven Stamkos is closing between $45-$60 at the moment. Those numbers will go up as the season begins, especially if McDavid continues to play well. 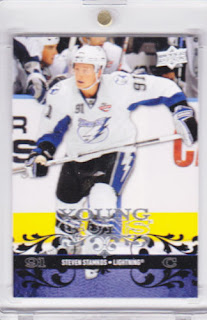 Last year Slater Koekkoek and Joel Vermin represented the blue and white for the Bolts, this year, well I'm not quite sure. Every team usually has at least one player with a couple getting two. The Lightning have been well represented the last couple of years. Koekkoek and Vermin last year, Vlad Namestnikov, Jonathan Drouin, Andrei Vasilevskiy and Cedric Paquette the year before and Alex Killorn, Richard Panik, Ondrej Palat, Nikita Kucherov and Tyler Johnson in 2013-14. That's a pretty solid release.

While you think, “Hey why not just throw Brett Howden on a card, case closed.” Unfortunately the NHL and the NHLPA have some guidelines for who gets to appear on licensed cards. The number one rule is be a part of the union I'm sure, but the most important is that the player has to participate in an official game. So that eliminates Mr. Howdon.

But McDavid made it into last year's set! Yes, and there is a good chance Auston Matthews will be in this years. Upper Deck usually gambles that the top pick will make it onto the ice before their product drops in November (also one of the reasons that the flagship product releases a month after the season starts). Sets that are released earlier in the year like MVP or Artifacts include rookie redemption cards. Cards are inserted into a pack with a code. You go to the website and enter the code. Months (hopefully only months) later the card ships. That way they can wait until the player skates in the game before releasing the card.

So now that you know a little more about hockey rookie cards, let's look at who the Lightning might have represented in this year's set. 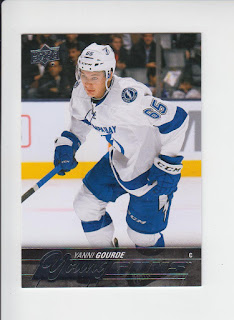 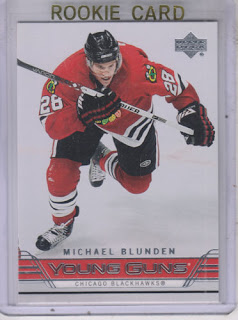 Matt Taormina – Yeah, he's old like Blundin, but he's been buried in the minors forever! There can be no way he has a card. He does? From 2010-11? The Lighting really are in between prospect classes right now. 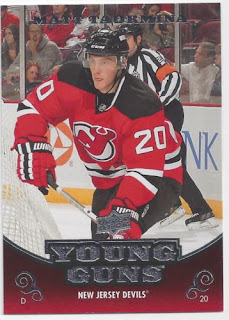 Nikita Nesterov – Nope. He was in the 2014-15 SPA update series. Stupid updates. 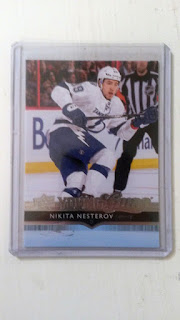 Tanner Richard – While he did not actually get into a game last year he was called up for the December 20th match against Ottawa. Depending on if being a healthy scratch counts as participating in an official game he might get the call.

Kristers Gudlevskis – He officially deputed in 2013-14 and added another game in 2015-16. He's actually been in sets before, most notably the 2014-15 O-Pee-Chee set and Upper Deck Black Diamond. However, he has never made the base set. His lack of experience might hinder him a bit. Playing time doesn't really matter as the checklists of previous Young Guns set are littered with “Who are these guys?” players, but they do want to produce cards that people want (it kind of helps sells) and despite being blocked by Ben Bishop and Vasilevskiy he might sneak his way in.

Luke Witkowski – He's a strong maybe. Much like Gudlevskis he has appeared in other sets like MVP and O-Pee-Chee. He would be the safe play for Upper Deck. It would by them some time until Series 2 is released at which time maybe one of the Syracuse players (cough, Adam Erne, cough) gets a call up. Not exactly a household name, he does have a chance to make the team as an extra defensemen.

I'm hoping it's Richard. I have a feeling he's going to find himself contributing to the big club sooner rather than later.