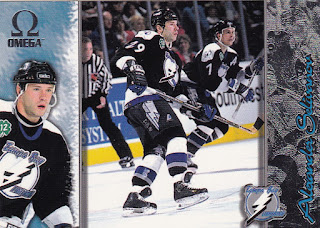 Throughout the first decade of the Lightning's existence Alexander Selivanov was the closest thing the Lightning had to a sniper. From his debut in 1994 to his trade to Edmonton in 1999 the Russian-born winger scored 78 goals in 304 games. For me, however, he will always be remembered for three things:


And yes, that is the order I remember them in.

In 1998-99 the Lightning were not a very good team. Their record peaked at 6-6-2 on November 8th. . On November 10th they would lose 10-2 to the New York Rangers (I was there!) which plummeted them into a nine game losing streak. A 2-1 win against Edmonton on December 4th would break the streak but they would go ahead and lose 15 of their next 19 games to...umm...fall out of contention.

They won only 19 games. Their “best” goalie was Corey Schwab and he had 8 wins and 3.52 GAA. Darcy Tucker of all people led them in scoring with 43 points. The highest plus/minus was +1 by a Andrei “Skippy” Skopintsev who somehow managed that while playing in 19 games for a team that gave up a league-leading 292 goals.

Their head coach/general manager was literally illiterate and helping his wife deal with cancer. Their captain, John Cullen and pro scout, Peter Mahovlich, were also battling cancer. Forward Benoit Hogue had to leave the team for a bit because his sister had been murdered in Montreal.

It was not a good year.

On a quiet Thursday in October, Selivanov had his $80,000 Mercedes repossessed from the parking lot of the Ice Palace. Despite making a reported $1.5 million that year he had somehow missed a couple of payments on the car. He blamed it on moving to a new address and not notifying the bank. Man, life sucked before online payments.

Flashback to a few years prior and Selivanov was having a great year. Despite being a Russian in a small market hockey town with no other Russians on the team he was playing well on the ice. In his first full season in the NHL, Selivanov's team leading 31 goals propelled the Lightning into the playoffs for the first time in their history. He looked like the dynamic, if sometimes inconsistent, scoring forward that could be a breakout star for the team.

Off the ice his life improved quite dramatically as well. In October of 1996 he married a girl named Carrie. Her last name happened to be Esposito. Which was the same name of the Lightning's General Manager Phil. Which wasn't really a coincidence since she was his daughter. She was also the Director of Team Services for the Lightning. Which kind of conflicted with a “no fraternizing with the players” rule he had set up with his employees.

Esposito didn't punish his daughter for marrying a Russian by trading him away (although I wouldn't have put it past him if he had a decent deal on the table). However, a couple of inconsistent seasons in a row (he would score a total of 31 goals in the next two seasons) and a large contract extension would lead to acrimony from his critics and the nickname Alex Son-in-law-ov was born. See, people could be assholes even before Twitter.

Esposito would soon be removed as General Manager and in January of 1999 Selivanov would be shipped out to Edmonton in a trade that netted the Lightning the legendary Alexandre Daigle. Carrie Esposito would follow Alex around for the next decade plus as his hockey career took him to Columbus, Germany and Russia. Unfortunately in 2012, at the age of 43, Carrie passed away from an abdominal aneurysm.

The early Tampa Bay Lightning teams were not great, but they weren't horrible. During the first three seasons of their existence they finished 6th in their division twice and 7th once. As an expansion team in the 90s they were built through other teams castoffs and high draft picks so some struggle was expected, but they were improving as a franchise.

In the 1995-96 they finally made the playoffs. They finished with a franchise best 38 wins (a number that wouldn't be bested until the Stanley Cup year of 2003-04). They won three out of their last four games in the season to snatch the 8th see in the Eastern Conference away from the defending Stanley Cup Champion New Jersey Devil.

Their reward for the best season in franchise history? A match-up with the powerhouse Philadelphia Flyers. Not many gave Tampa a chance against the Flyers when the series started. After all, what chance should an upstart, sunbelt hockey team have against a team with Eric Lindros, John LeClair, Ron Hextall and Rod “The Bod” Brind'Amour? Plus the Lightning had an injured goalie in Daren Puppa who was playing with a bad back, an injured Brian Bradley who missed all of Game 2, oh and young defenseman Roman Hamrlik announced that he hated playing for coach Terry Crisp after the Lightning got shellacked 7-3 in Game 1.

Game 2 was a different story as the Lightning took advantage of some injuries to the Flyers to win 2-1 in overtime and send the series to Tampa tied at a game a piece. Selivanov had tied the game in the second period and Brian Bellows won it in overtime.

Game 3 was back in Tampa. In a converted baseball stadium then known as the ThunderDome, 25,945 fans watched the Lightning battle back from 3-1 and 4-3 deficits to send the game into overtime. Then, 2 minutes into overtime Selivanov scored the game winner.


There are several great things about this goal.

Brian Bradley's pass to Bill Houlder. And you thought cross-ice passes were a recent Lightning phenomenon.

Houlder's great fake and then horrible pass. Watch the slow-motion replay. He sold the slapshot and then fired that puck right into Selivanov's skates.

Selivanov getting mugged by Dale Hawerchuck as he skated in front of the net. Late 90s hockey at its obstructioniest best.

The sheer noise from the crowd after the goal. That would have been awesome to be a part of.

Sadly that would the high water point for the series and the organization for the next few years. Puppa's back broke down and he couldn't carry the team any more. The Flyers won Game 4 in front of a NHL record 28,183 fan to tie the series. They would win the next two games as well, ending the series in six games. Would things have been different if Puppa didn't have the back of an 85-year-old man? Possibly.

The organization would fall on hard times after that playoff season. Owners would change, coaches would change, Selivanov would be traded, games would be lost. Many, many games would be lost. And for Lightning fans sitting through three straight seasons of under 20-win seasons. There was one lonely banner that hung in the Ice Palace. It wasn't a Stanley Cup banner, or a conference title banner or even a division banner. It was a banner celebrating the record crowd.

And we had the memory of Selivanov's goal. For most organizations that would be barely a footnote in a team's history. Heck even more recent Lightning fans probably don't rate it in their top five memories,but for a generation of Lightning fans that will be one of the greatest moments in Lightning history.

Selivanov would have a good season in Edmonton before falling out of their graces. He would play one season in Columbus before moving on to the KHL and German leagues. He last played in the Netherlands in 2011-12 before retiring. He had been coaching in the KHL with HC Admiral Vladivostok but does not currently appear on their website.

I don't have many of the 1997-98 Pacific Omega cards.  I picked this one up in a Zistle trade where the other guy was super generous and sent me a box of Lightning cards in exchange for a couple of extra Topps Heritage cards I had.

I like the horizontal design, but the borders are a little too wide on the side.  The next year's design was much better (see the Vinny card on my last post). I also like the Rob Zamuner cameo in the background.

The back of the card has no stats but mentions Selivanov scoring two goals in 39 seconds against the Flyers in November of 1997.

I can't believe I'd never heard the Alex Son-in-law-of story before, that is so great. As is the Mercedes story. Really enjoyable post, thanks!