Hockey Season is Here - why not get some new cards

There are days that I wish I could live a little closer to Target so that I can fulfill those daily urges for more cards. Most days I'm glad that I don't. It helps keep me from flinging money away on blasters and packs of cards that end up in the back of the closet. Laziness trumps collecting desire 99 percent of the time.

However, there are times when I really, really want some cards and I don't feel like buying an entire box or organizing a trade. So I journey out to COMC (check out my cards) and put a personalized “blaster” together. Keeping the total (without shipping) to somewhere around $20 I pick and choose some cards that I need. Here is the latest “blaster” I put together: 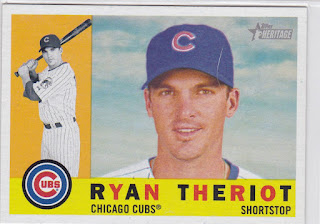 I'm probably never going to complete either the 2009 or 2012 sets, but it's always nice to plug away. Rizzo and Posey pretty much finish off the non-short print needs. I ended up picking up only one 2009 Heritage and it's another Cub – Ryan Theriot. For some reason, scores of women in their young to mid-twenties wear Theriot jerseys to Wrigley even up to this season despite the fact he hasn't sported the pinstripes since 2010. 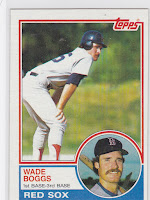 The Cal Ripken, Jr. was the first card to go into the shopping cart. Love the orange and white uniform collection (along with the no belt look). The Wade Boggs rookie card is one of the bigger priced cards in the set. Since I'm not looking for huge value I settled with an off-center version with a really good price. 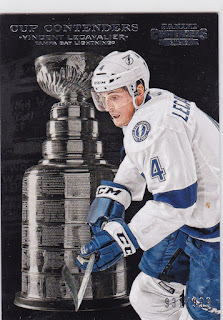 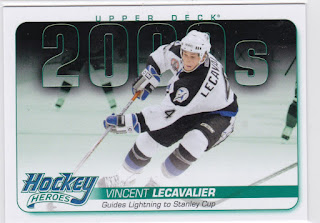 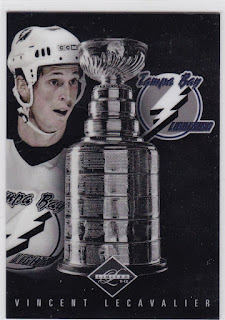 Through six games this season, Vincent has yet to make the line-up in Philadelphia. It's beginning to look like his career in the NHL is almost over (although you wonder if his old coach/nemesis John Tortorella might be able to find a use for him in Columbus).

I went with a theme for these three – Stanley Cup. It's always nice to see your favorite player's name associated with the Holy Grail. 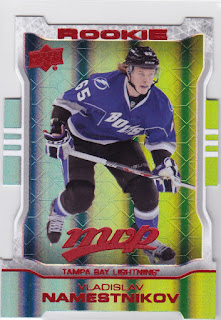 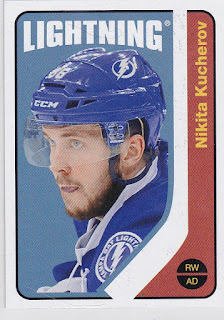 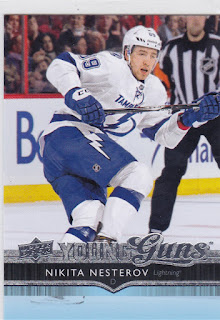 One shiny Namestnikov, a retro of MY BOY NIKITA KUCHEROV and a Young Guns of the recently suspended Nikita Nesterov. The Lightning kind of shot the wad with rookies over the last few years. This year, it's probably just going to be Slater Koekkoek and Jonathan Marchessault. 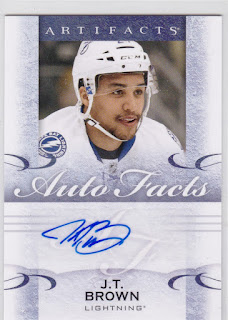 JT Brown Artifacts Auto Facts. Whenever you can get a fourth-liner's autograph for around a dollar you gotta do it! 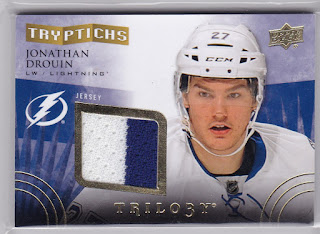 A very nice card from Jo Drouin's rookie year. It's numbered to 400 and is a two-color swatch. Can't really get much better than that!

So there ya go. Fourteen cards, all killer – no filler!