It's a pretty good boxing weekend for one that doesn't include anyone named Mayweather or Pacquiao. Well, good enough for me to shake the dust of the keyboard and bang out some words about it. First up on Friday night, ESPN returns to the Windy City and features quasi-local boy Mike Lee. Sadly I do not have tickets or a press pass to attend. Then on Saturday, Gennedy Golovkin headlines a HBO Pay-Per-View in Madison Square Garden where he looks to add another victim to his hit list.

We'll begin with Golovkin, because he is the most interesting fighter on the list. Born in Kazakhstan, lives in Germany but training in Big Bear, California Golovkin has ascended rapidly up the “must watch” fighters list over the last two years. During that time (which coincided with his United States debut – a blistering TKO victory over Gregorz Proksa) he has gained a reputation, spearheaded by HBO Boxing, as the “Most Dangerous Man” in boxing.

It's easy to like a fighter who finishes off his opponents and Golovkin's string of 16 straight knockouts makes him as easy to like as apple pie on Thanksgiving. He can hit with both hands, throws power punches at will, has the agility and balance that rarely leaves him off balance all while commanding the ring like it's his personal dance space.

He's drawn a lot of comparisons to a young Mike Tyson (maybe we should call him Kazakh Dynamite much like Tyson was Kid Dynamite) for his power and the way opponents are starting to shy away from him. Of course, no one is flat out admitting that they won't fight him, but no one of note seems to be in a hurry to sign the dotted line for a fight.

Not only does he dole out his fair share of punishment, but he's not going to be confused with Winky Wright anytime soon when it comes to defense. He gets hit from time to time, enough so that you begin to wonder if this might be the time he pays the price for keeping his hands down.

I can imagine his opponents thinking, “Hey I just rocked him with a straight right. I can do this” right before they wake up staring at the bright lights and a mustachioed man in a blue shirt waving his arms over his head.

Maybe it's his love of cardigans or huge smile whenever he's being interviewed, but no one scheduled to face him is ever thinks that they're going to fall victim to his fistic bombarment. Granted no one on the professional level is ever going to admit that they're scared of getting hit by their opponent, but some of his victims have been extremely boastful prior to stepping in the ring. 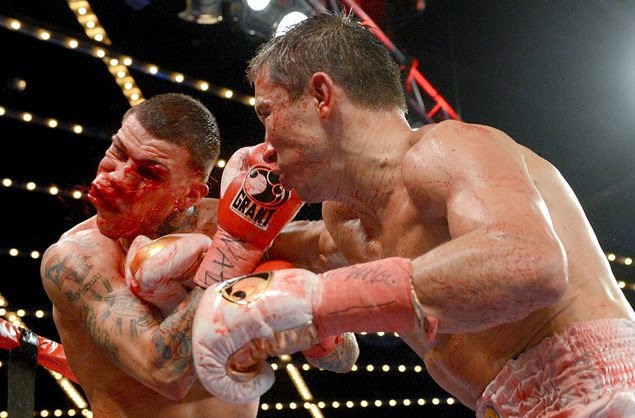 Curtis Stevens: “I'm coming there ready. I'm not scared, obviously, because I asked for the fight.” 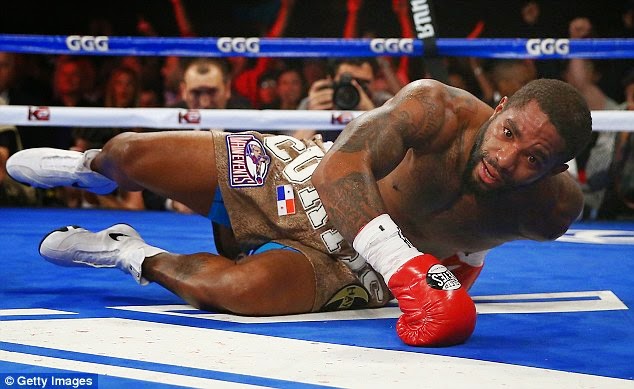 Osumanu Adama: “The difference with me is that I'm not scared of Golovkin” 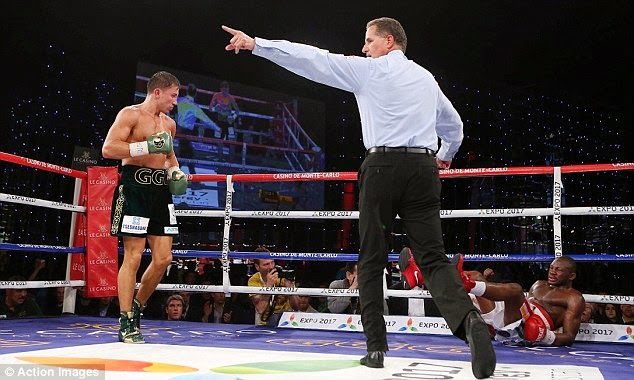 The point being, you might not fear him going into the fight, but chances are your thoughts will change once your back is on the canvas and the overhead lights are swimming in your eyes.

For boxing fans, enjoy Golovkin for where he is at now in his career. He is getting popular, but he is not at the over-saturation point yet. Sure, there are folks on the internet who say he's overrated, but that's the cynical internet where God himself could come down, heal the sick and lame, end warfare and someone would write, “Ehhh. That's nothing, Buddha would mop the floor with that guy.

Nor has Golovkin risen to the point where he's become the pick and choose, fight two times a year superstar boxer. Remember how much fun it was to look forward to Manny Pacquiao's fights when he was laying waste to his opponents? When he was ripping up De La Hoya and Rickey Hatton? Those were fun days, before the “When Will He Fight Mayweather” talk really escalated or he got mired down by Timothy Bradley.

That's were we're at with Golovkin. His future fights aren't more important than his present fights. Who care's if he'll fight Julio Cesar Chavez, Jr. or Saul Alvarez. All we want him to do is bust up Daniel Geale like a birthday pinata.

I agree that he hasn't fought the best fighters yet, but in this business you still have to work your way up the ladder. He's beating, straight up stole-his-money beating, everyone that enters the ring with him. So enjoy that now. Because it's going to change. It always changes.

I don't know much about his opponent, Daniel Geale. He was born in Tasmania (awesome) and lives in Australia (still awesome) and held both the IBF and WBA super-middleweight titles. His two losses were split decisions that were somewhat controversial and he's beat Felix Strum on points in Germany. Which is like beating Floyd Mayweather on points in Las Vegas. It just doesn't happen.

He seems like a nice fighter. Fairly competent on defense as he has never been knocked out and hasn't been down in a round since 2008. Of course, looking at his list of opponents, none of them has had the power of Golovkin. He is the requisite feel-good underdog. Unlike most fighters, he doesn't seclude himself in a remote fortress when he trains for fights, rather he stays at home with his family. He has even dedicated this fight to his mother who is battling non-Hodgkins lymphoma. And against almost anyone other than Golovkin I would be rooting for him.

Like those who stumbled to the mat before him, Geale isn't afraid of Golovkin. Of course, he can't allow himself to be. Or else the fight is already lost. Geale has to believe that he is different than everyone else who has fought Golovkin. That his defense is tighter. That if gets inside he can do serious damage where others have just annoyed the happy go lucky Kazakh.

Does he have a chance to win? Sure, I'm sure his trainer has developed a plan for him. Maybe not a knockout plan, but a “keep it close on the cards an squeak out a win” plan. Of course, even the best laid plans tend to go awry once a thudding left hook lands on your liver. That's when we'll see what Geale is really made of. 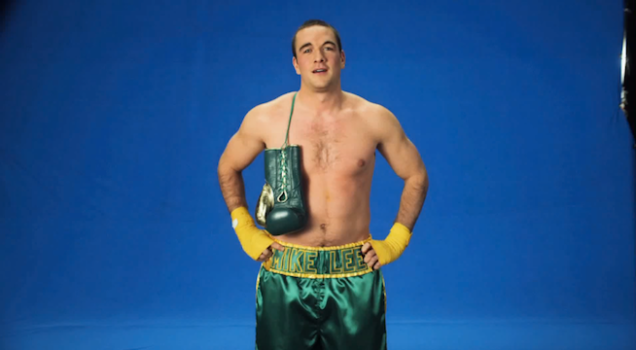 I've never had much good to say about Mike Lee. If I'd listened to my mother then I would never have anything to say about him. I'm sure Mike Lee is a good guy, I'm sure he works with charities and is nice to his mother. For some reason he just rubs me the wrong way – much like Lukas when he played for Liverpool.

Maybe I'm finding out that I have a bias against fighters who've graduated college. Especially fighters who went to Notre Dame. Or the fact that despite being from the area he's only fought in Chicago once (his pro debut). It's probably the Subway deal. You know the one. There are actual recognizable athletes saying how much they like Subway sandwiches and then there is the guy with boxing gloves around his neck.

Imagine if Subway had, instead of Ryan Howard, chosen Jesse Biddle to pimp their Sweet Onion Teriyaki subs. Sure, Biddle might be a star at one point, but right now he's just some face in the crowd. Boxing deserves more than that for one of the few commercials that has a national spotlight.

Despite my dislike of the fighter he is setting himself up for a nice little comeback story. The golden (domer) kid who has a nice contract with Top Rank boxing and a little money coming in from endorsements without really having accomplished in the ring was kind of riding the top of the wave.

Then it came crashing down. A couple of bulging disks in his back and some jaw issues sidelined him for almost two years. His contract with Top Rank expired and wasn't renewed. He left his Texas-based trainer, Ronnie Shields, and signed up with former heavyweight contender Chris Byrd. He TKO'd undefeated Peter Lewison in April and will look to do the same on Friday to Paul Gonsalves.

Those two fighters have a combined record of 13 and 3. In the previous 11 fights his opponents were 39 and 51. So he is stepping up his competition. Hopefully he steps up his work rate as well. He needs to be working regularly to make up for the missing years and for a relatively empty amateur career as well. If he does, then maybe he replaces Mike Jimenez at the top of my Best Chicago Fighters list.

I always love to read when you write a boxing post. I noticed nobody ever comments though and didn't want you to think they were not getting any attention. I'm busy Saturday night but I'll be DVRing the fight to watch later.

Adam, thanks for the comment. The boxing posts usually have lower views, but I tend to like writing them more.