The One.....Where I talk about boxing again.

A few weeks ago I managed to get out of work at a decent time so I decided to stand in line behind some Mexicans.  What can I say, I like waiting in line. It’s definitely one trait that the Duchess and I don’t share.  If she was with me, there is no way she would have waited in line for 30 minutes, Mexicans or no Mexicans.  But I wasn’t there because I’m a big fan of waiting or because I’m a really big fan of pissing off office workers at rush hour (we were kind of blocking the sidewalk and they were forced to walk on the street).  I was there because the biggest show in boxing was in Chicago. 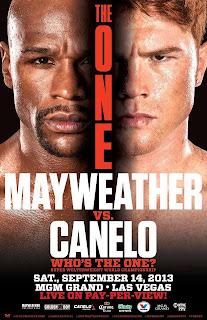 In order to promote their upcoming pay-per-view Floyd Mayweather and Saul “Canelo” Alvarez embarked on a cross-country promotional tour stopping in 11 cities to get boxing fans excited about the biggest fight of the year.  Since it was free it was right in my financial wheelhouse.  However, since it was free it was in a LOT of people’s wheelhouse.  When I arrived, about 45 minutes before the festivities were scheduled to kick off, the line went out the front door of the Chicago Theatre down State Street and wrapped around Lake street.

I would provide pictures, however my phone picked a horrible time to run out of juice.  Which also meant I had no way to entertain myself while I was waiting, possibly in vain, to get in.  Lucky for me, boxing fans are chatty and seem to have endless things to talk about.  Right behind me two ladies were debating the merits of Mayweather, mostly if his out-of-ring antics detracted from his in-ring performance.  They were also planning their trip to Vegas in September for the fight,

“I might not get to the fight, ‘cause I ain’t got $1500, but I’m definitely going to be on the strip for the fight. Vegas is great when Floyd is fighting” one of the ladies opined.  I too don’t have $1500 to blow on a ticket, but I would disagree with her about Vegas being great when Floyd is fighting.  Vegas is great when there is ANY big boxing contest in town.  It’s also the best time to play “Hooker, Not Hooker”.

As the 6:00pm start time neared people started to get antsy about getting in, especially since the line had barely moved.  Eventually we did start shuffling to the entrance only to encounter another obstacle - you needed a ticket to get in.  And the lady that was nearest to us had no more tickets.  She nonchalantly pointed to another worker who “might have some left” which set off a mini-stampede.  I would like to thank my youth basketball coach and my predilection for cheeseburgers for helping me box out two young kids as they tried to get past me to get a ticket.

With ticket in hand I entered the historic theatre (really, take the tour if you’re in town) where I saw A Christmas Story: The Musical (one of the best Christmas presents of all-time) and was promptly faced with another obstacle.  Seriously, Link had less challenges rescuing Princess Zelda then I had getting into this dog-and-pony show.  This time I had to choose between waiting in another line to check my umbrella or abandon it because it wasn’t allowed in the seating area.  I guess they were afraid I might use it as a weapon should a melee break out during the event.  Sorry Hambone, but your Avocent umbrella was left to its own defenses as I hot-footed it up to the balcony level.

In the end I didn’t need to be so hasty.  As I settled into my seat the show was still in its preview stage.  A couple of large monitors were looping a 5-6 minute video of show promotion all built around the theme of the contest “The One”. Mayweather was “The One” while Alvarez was “The Next One”, which during the first showing of the video I thought they said “The Mexican One,” which I thought was a pretty risqué way to advertise a fight.  Hey, I’m old and the ears don’t work so well.

The video asked various fans who was going to win the fight and why.  They went through pretty much all of the demographics and even had the couple who disagreed (something along the lines of  “if Alvarez wins we’re not getting married, ha ha ha ha”).  In the footage the opinion was pretty much split down the middle with the analysis along the basic premise - Mayweather is smarter and faster while Canelo is younger and stronger.

Now, there was no such disparity in the Chicago crowd, which was overwhelmingly pro-Canelo. There were a few folks from “The Money Team” in the crowd acting pretty much as douche-tastic as you can imagine.  While in line a couple of 20-something year-olds called their friend at the head of the line to get tickets.  Once they got them, they screamed, “That’s how The Money Team rolls, bitches!”  Yes, you got free tickets before the rest of us.  You’re a success in life, son.

Finally, the show was ready to start and the promoter introduced Alvarez first. The “Mexican James Dean” wearing jeans and a tight fitting blue polo shirt came to the stage to cascading applause and CA-NEL-OO chants from his admirers.  He was prompt, respectful and reserved.

Then it was Mayweather’s turn.  In true heel fashion he took his time, made the crowd wait, wait, and then wait some more.  When he finally graced us with his presence he was decked out in a grey sweater, flat-brim “TMT” hat, sunglasses and obnoxiously large gold chain.  He stood and smirked at the boos, because, well, he’s the best in boxing at what he does - make his detractors go ape-shit crazy. People don’t dislike Mayweather, like they might dislike a fighter like Fernando Vargas.  You won’t hear them say, “Eh, yeah Mayweather, I just don’t care for him.” They despise him, they don’t want him to lose, they want to see him hurt.  They want him lying on the canvas in pain like Danny LaRusso after his leg was swept.

After a quick stare down (where there wasn’t as big of a height/size difference as I thought there would be) he finally took his seat, his daughter on one side and his hype man Lenard Ellerbe on the other. Mayweather then proceeded to spend the rest of the show drawing something on a piece of paper.  It was awesome.  While De La Hoya, Alvarez, and the promoter all hyped the fight Mayweather sat there like a 7thgrader in algebra doodling away.

Little things like that are why I can appreciate the dedication he puts into being the “bad” guy.  It’s easy to get worked up about him betting hundreds of thousands of dollars on basketball games or lightning money on fire, but to go to the detail of acting like this promotional tour was nothing but a two-week after school detention is pure villainous genius.

Meanwhile, Alvarez sat there like the humble, leading man, vanquisher of evil that he’s being set up as.  He spoke briefly in Spanish (which I really have to learn at some point) about how he is ready to win for the people ending with the bold declaration, “I am your rooster!”  Ummm. Good for you?

De La Hoya had a few words for the crowd as well.  Thanking the crowd for coming out, announcing that boxing is alive and well, “especially in Chicago” and then dropping a little tease about some plans Golden Boy has for boxing in Chicago.  Hmmm…perhaps a big fight down the road, a pay-per-view in our fair city?  That would be awesome.  Not only for me, but also for some of the local fighters.  Getting on the under card could provide the next step for Mike Jimenez, Andrzej Fonfara or even Dimar Ortuz.

After Golden Boy was done, it was time for Mayweather to give his oral presentation.  He sidled up to the podium and stared out at the crowd and proceeded to shout out, “HARD WORK!” His Money Team was delighted to scream back “DEDICATION!” That went on for about 20 seconds before the sing-songy “CA-NEL-OO!” chants drowned them out. Mayweather stood there and smirked while the boos and derision rained down upon him (another classic heel move, he learned well during his brief dalliance with the WWE).

After some more toying with the crowd he got down to basics and thanked the sponsors (as if he gives a shit about O’Reilly Auto Parts). He pointed out that he’s been in the situation before and that while his opponent might be relying on youth, he had experience on his side. Then the pound-for-pound best fighter in the world closed with, “Chicago is a great city, Mexico is a great country, but September 14th is all about the red, white and blue!”.

They closed with another stare down for the cameras and then the crowd was dismissed while the print and video media was invited to the stage for interviews.  I was a little disappointed as I had hoped that we would be treated to that portion of the spectacle as well. I guess I should have inquired about a press pass after all.

In the end, I learned a few things:

Chicago is pro-Canelo
Mayweather plays the villain better than anyone in sports
Corona makes 10-foot tall light up display bottles.
Something is in the works for boxing in Chicago