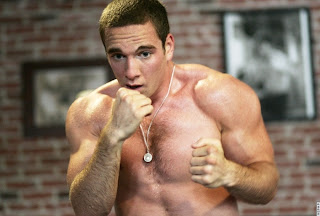 Mike Lee is arguably Chicago’s most recognized boxer.  Not so much for his work in the ring, but for his appearance in a nationally televised commercial.  He’s the guy in the Ryan Howard/Justin Strahan Subway commercial that has people saying, “Who the hell is Mike Lee and why is he in this commercial?”


The answer is that Mike Lee is an up-and-coming light-heavyweight that has nine professional matches under his belt (all of them wins) and a taste for turkey subs from the ubiquitous sandwich chain. His role as a spokesman for Subway probably has more to do with his Notre Dame connections more than his proficiency of pugilistic acumen. Lee, who had 16 amateur bouts before turning pro, graduated from Notre Dame as did Subway’s Chief Marketing Office, Tony Pace.


While Lee has some notoriety due to the commercials he still needs to prove himself in the ring.  Being in the Top Rank stable can help him build on that popularity since it would be easy for them to put him on some of the pay-per-view fights that the promotion company puts together.  Most popular boxers rose to fame on those types of undercards.


Before that happens, Lee has to start facing some more competent fighters in the ring. Scrolling through his fight history doesn’t exactly elicit a “who’s who” of light-heavyweight contenders. Seven of the nine fighters he’s faced have losing records including three guys who hadn’t won a fight when they faced him. I understand bringing a fighter along slowly, especially one who doesn’t have an extensive amateur career, but due to his popularity (especially in Chicago) one has to wonder if Top Rank will rush the 24-year-old along.


I didn’t want to paint him with the “all flash, no substance” brush before actually seeing him fight, so I tuned in to ESPN3 Friday Night to watch him take on Eliseo Durazo in a six-round contest (there was some discrepancy on how long the fight was supposed to be. Top Rank had promoted it as a four-rounder, but the Las Vegas commission had sanctioned it for six. This led to the amusing situation of Durazo heading to his corner after the fourth round thinking the fight was over).


Lee put in a winning performance as he took five of the six rounds on all three judges’ scorecards (as well as mine), but he didn’t score the highlight reel knockout.  To my eye it looked almost as if he was in a training session. It was as if trainer Ronnie Shields told his fighter to go out and work on his jab, which was crisp, and his defense, which was a bit spotty.


Durazo was a willing, if slightly fleshy, competitor who had taken the fight on only five days notice after Lee’s scheduled opponent, Isiah Barela, withdrew due to an injury.  El Negro’s game plan seemed to center around walking forward and hitting Lee’s body as much as possible with little concern for using his jab.  Lee did a good job of deflecting most of the punches with his elbows, but enough got through that I wondered how he would have fared against a fighter with a little more power.


While Lee was clearly the boxer with better stamina and mobility in the ring, he was willing to stand still and take punches from slower-footed opponent. As he matures that’s a trait he hopefully gets away from.  After all, it’s always better to slip a punch then take it or block it. With a little better footwork he can also get himself into positions to throw more effective punches.


In close Lee had a tendency to lean over and keep his chin exposed, a chin that Durazo tagged with an upper cut on at least two occasions. Luckily for the Subway aficionado there wasn’t much power behind the punches.


On offense Lee did a good job snapping off his jab and working a hook off of it. It was kind of surprising that Lee didn’t work the body more, especially with how soft Durazo looked in the ring. Lee did land several decent punches through the match and looked to have Durazo hurt in the second when the Mexican fighter backpedaled rapidly after absorbing a few punches from the Wheaton native. However, Lee was content to let him back up and didn’t keep the pressure on his rotund opponent.


He didn’t show game-changing power that elite boxers usually possess. Again, it’s possible that he wasn’t interested in raining down power shots on Durazo, choosing instead to get some live ring work in. When Lee did throw punches he was on balance and able to string some combinations together including some three and four punch combos.


At this point in his career Mike Lee is still a bit of a raw product in the ring. It will be interesting to see how Top Rank brings the24-year-old along. His ability should keep him away from the top-tier boxers for the next few fights, but his name recognition might provoke them to reach above his current skill set for a bigger payday.


If they asked me (and they won’t) I would point out that he hasn’t fought in Chicago since his pro debut at the UIC Pavilion. Perhaps the future could include a Friday Night Fights in the Windy City against some of the local talent that is on the way up. Maybe the powers that be could arrange a Mike Lee vs. Andrzej Fonfara match-up for sometime in the fall? They shouldn’t have any trouble at all selling that one out. Fonfara’s willful aggression would be a good test for Lee’s defense and chin.


After watching one boxing match I’m not ready to crown him as Chicago’s best boxer yet, but at the same time I’m not going to write him off as nothing but hype. With the win I’m sure he’s also kept his name and face in Subway commercials a little bit longer.
Posted by Justin G. at 12:19 AM