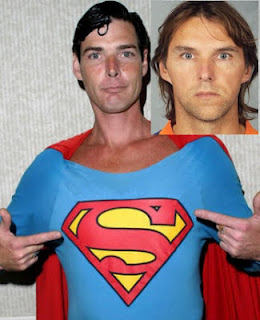 Before I go dark for a couple of days....Heading out of town, baby!

What you see here is Dwayne Roloson's NHL.com mug shot superimposed (cause I got mad Paint.net skills) on a picture of Christopher Dennis.  Dennis would best be known as the "Superman" who poses for the tourists on Hollywood Blvd. He was also one of the subjects of an excellent documentary that's streaming on Netflix called Confessions of a Superhero.

Dye Roli's hair black and give him a curl and he could fit right in.  Of course, Roloson would have to smile at some point, and I'm not quite sure he's capable of doing that.

There is a better than average chance that Roloson played his last home game in a Lightning uniform Monday night and he was exceptional.  His stop on Mike Green might have been one of the top saves ever by a Tampa Bay goaltender.  This season might not have been the smoothest, but he did give us plenty of moments like that throughout his short career with the Bolts.

sort of reminds me of steve nash too...