So it's the day after Thanksgiving (or as my Canadian boss would say Thanks Giving) and there is still a ton to be thankful for. My Significant Other, family, friends, a job, bacon chocolate chip cookies, etc.

What else am I thankful for? How about Steven Stamkos' mustache? 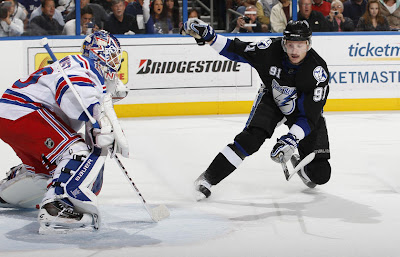 
Is that not a thing of beauty? It's not as lush as some of his teammates (Ryan Malone, Steve Downie and Nate Thompson to name a few), but it's the embodiment of a teenage mustache. Yes, I know he's no longer a teenager, but still. Wispy and whimsical. Hopefully, it stays past Movember. After all, who messes with a hot streak?

Also, thanks to an extra slow day at work I was able to read a few hockey blogs and think it's time to anoint Stamkos with a new nickname. Stammer is nice, as is Spicoli and Seen (both compliments of the fine folks at Raw Charge ).

Stamkos asked to be quizzed on the stats printed on the back. He worked at a butcher shop in downtown Toronto where he learned to interact with the public

With his cherubic face it works nicely on an ironic level. Kind of like "Killer" for James Wright. Surprisingly, I couldn't find any relatively famous hockey players nicknamed "The Butcher" so he can lay claim to it.

5. One referee, on Steven Stamkos: "No one in the NHL plays with a smile on their face like he does." I think that's so important. You can't be great at anything unless you love it.

"Smiles" Stamkos. Not as menacing as "The Butcher" but definitely catchy and alliterative. Again, I couldn't find a notable hockey player with the nickname so I guess it's open.

As I've mentioned before I'm not a hockey historian so if I missed someone let me know. It would be nice to anoint the kid with a halfway original nickname in this era of A-Rod's and "Greenie's".
Posted by Justin G. at 12:13 PM