Hey. Welcome back readers - How about a 2020 Topps Error Card?

It's been awhile around these parts. Since the last post, 2020 baseball began, the Baltimore Orioles flirted with a playoff spot and are still on pace to hit the over in their win total, and the Tampa Bay Lightning made it back to the Eastern Conference Final. Guess which one of those is occupying most of my time?

On the baseball card front, things are still moving forward. Lots of trades (sitting at a -780 trade differential), a little bit of retail purchasing, and just one box of cards purchased. Most of the 2020 cards I've picked up this year have been through trades and a couple of group breaks. One of those was a 2020 Topps Series II half'-case break which led to me having quite a few Orioles cards.

When they came in a couple of months ago I logged them and set them aside. They're still sitting on the desk ready to be put away along with some other random cards. The life of a card collector - the sorting is never done. For once, it's a good thing because another card I picked up today sent me back to that pile to verify something.

As far as I can tell, Topps made a mistake in their base set that no one has written about other than a few Twitter users, at least that I'm aware of after searching on the internet for roughly five minutes. Can you spot the error? 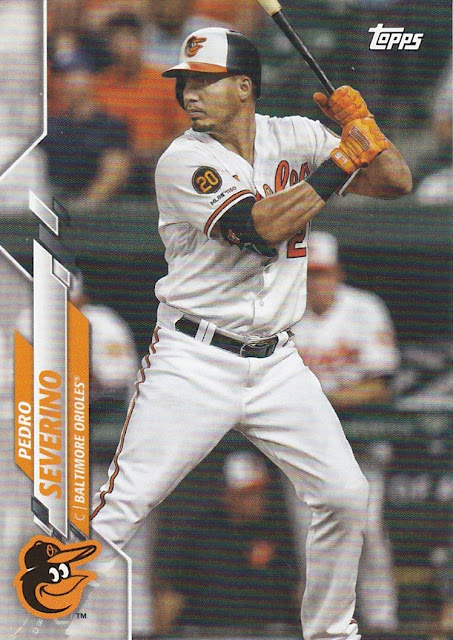 Yeah, that's not Pedro Severino.
Did I, a life-long Orioles fan, notice it when I first received the card? Nope. It wasn't until today, when I broke open a Topps Orioles team set that I noticed the mistake. Yes, the team set, which is basically all of the Orioles cards from the flagship with a different numbering system, has the same error. A quick check of his 2020 Topps Heritage card shows that they used the correct photo. So at least he can show his grandkids that card.
Imagine working all your life to get your picture on a baseball card and when it comes out - it's not you. Granted, it's card manufacturing in the 21st century so luckily Severino, who didn't play consistently until last year, still has 250+ other cards that most likely have his face on it, but if you only knew him from this card you would think he was a left-handed hitter.
As far as I can tell (again 5 minutes of research) that is a photo of Anthony Santander, the switch-hitting, former Rule V draft pick, internationally known star, who had a breakout 2019 season that has rolled over to 2020.
Good for Santander to find a way to get an extra card in the series. His base card features the awesome flag jersey that the O's wore last year: 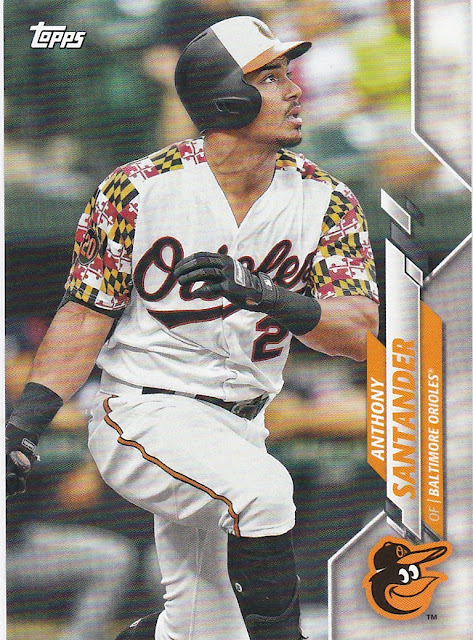 It also highlights one of the fun parts of figuring out who is who (who is whom? whom is whom? whom is who) on cards. As you can notice on the Severino card, Santander is wearing orange batting gloves. In his actual card the right-fielder is wearing black batting gloves. There are also photos of him from last year wearing grey gloves.
He also used a couple of different bats last season. One was a black bat with a brown handle. That's not the bat seen on the Severino card.  A few minutes of paging through Getty Photos ensured that he used the combo of the orange gloves, black-handle/light barrel bat without long sleeves. Yes, this is how I spend my hours these days.
Of course, this wouldn't be the first time the wrong photo has been used for a player, most notably is probably the 1987 Donruss Opening Day Barry Bonds card that had a photo of Johnny Ray. Unlike the Bonds card, there is no known correction to the Severino card. And since Severino isn't quite a Bondsian figure in baseball, this error isn't going to go for big bucks on the secondary market.
It'll linger on checklists and price guides with the dubious (UER) tag indicating it's an uncorrected error, you know like half of the early Donruss cards. Hopefully, if fans are ever allowed to interact with players ever again someone will get both players to sign a version of the card and it'll make the rounds as a nice little novelty.
I suppose it would only be fair that Topps flip the roles in 2021 and release a Santander card featuring Severino on the front.

As far as errors go, UERs don't count at least in my opinion.

Good eyes. In addition to the Bonds, it also reminded me of the 1988 Topps Al Leiter error card with Steve George. Like the Bonds, it was corrected... but I don't think either are very valuable or desired.