New Cards at No Cost - It Must Be a Trade Post

Due to an early work schedule this weekend I missed out on the spring version of the Chicago Sun Times Show. So I didn't get a chance to wander around the convention center looking at the same dealer tables that I have seen several times over the last few years. OK, so I wouldn't say I missed out on that. What I did miss was meeting up with Sal, Tim and Nick and increasing my collection through their generosity.

With the self-imposed budget (which I've managed to eat up about ½ of three months into the year) I haven't been buying that much either. One thing I have managed to keep up with some online trading. Over the last three months I've swapped out five or six trade packages, keeping the collection fresh and the post office in business. Just this week a lovely white postal envelope showed up from our neighbors in the True North.

He goes by the handle Rosenort, needed some 2013-14 Upper Deck and runs a blog by the name of ConditionSensitive. I sent him a trade offer on Zistle and he accepted. In return for a handful of doubles that I had, the fine gentleman of Watson sent back the following. 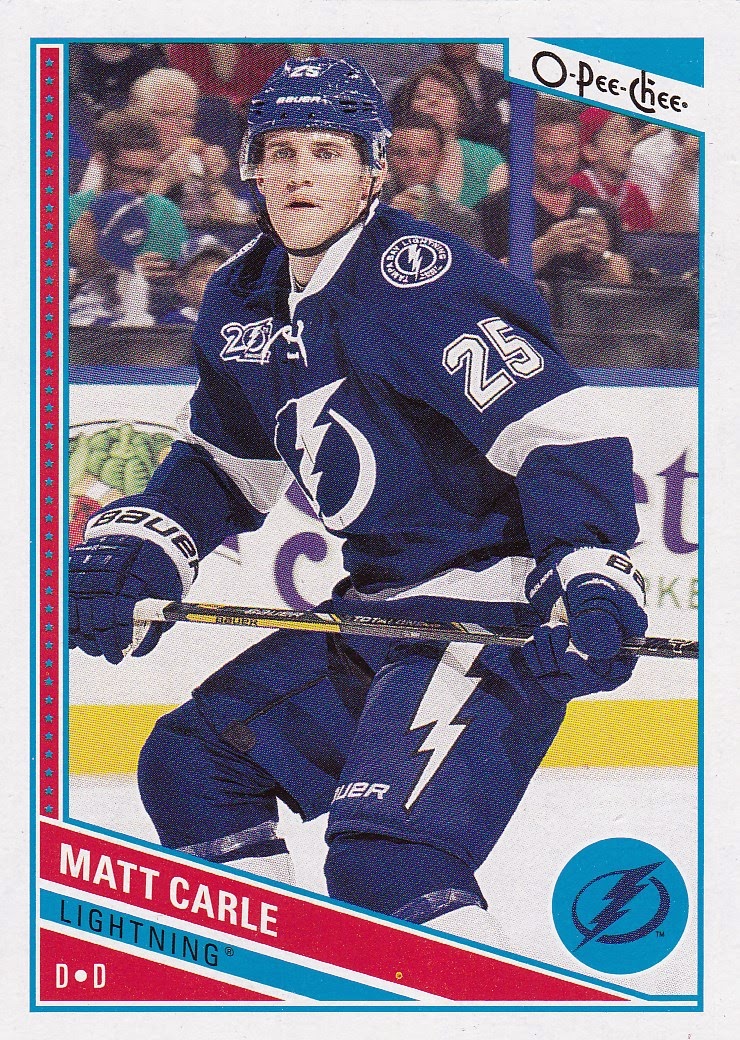 I often forget that Matt Carle is on the Lightning. Not in a bad way, or in a “God, I wish he was wasn't on the team” way. More like I'll be watching the game and he'll do something and I'll think to myself. “Oh yeah, Matt Carle is on the team.” That being said, he's had a decent year – chipping in 27 assists from the blue line. 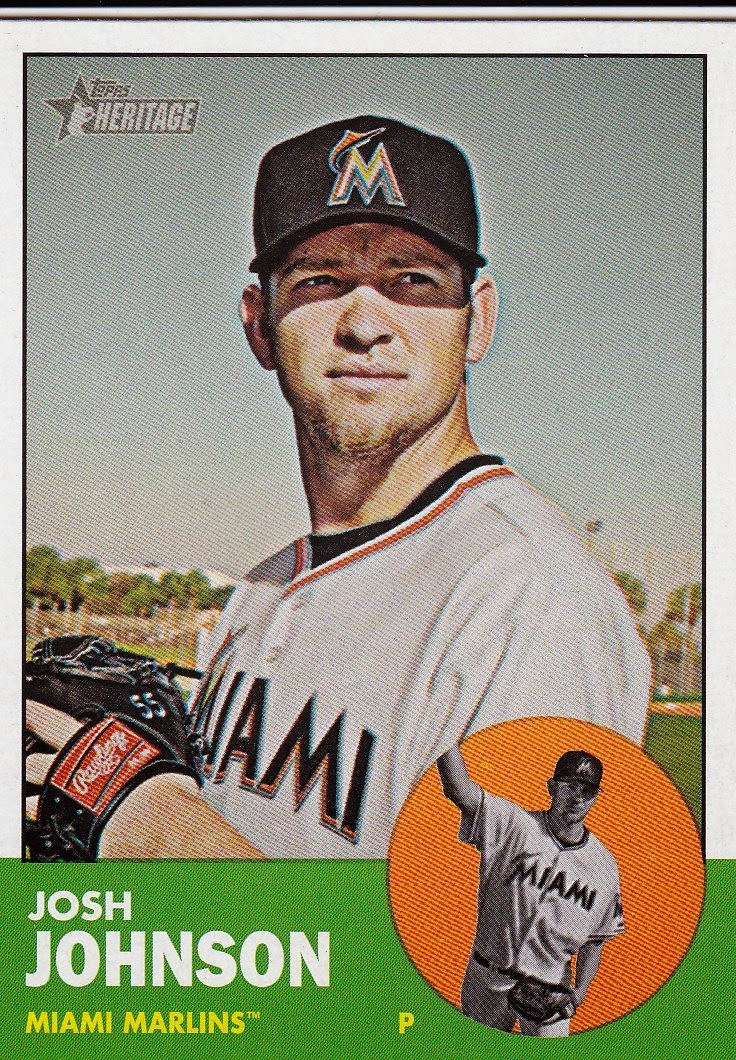 One of these days I'll finish this set. And one day Josh Johnson will be healthy again. 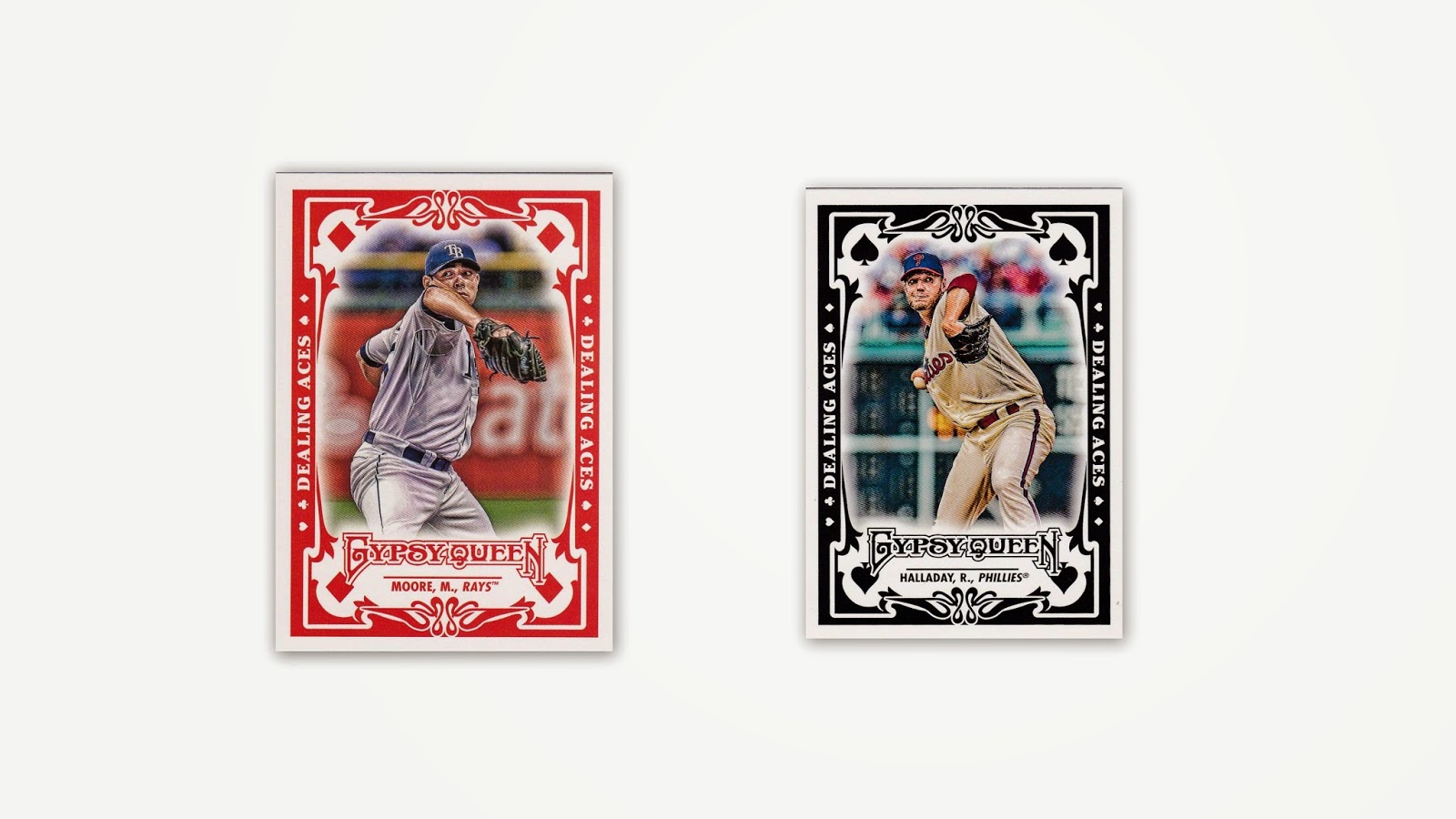 At some point this season David Price will be a former-Ray and I think Moore will be the one to step into the number one starter role. If the Rays are in contention at the trade deadline, Andy Friedman is going to have a huge decision to make.

A few years ago I wrote that, among active pitchers, Halladay had the best shot at winning 300 games. At that point he was mowing people down like it was a video game. He retired this winter with 203 career wins. Another great prediction by Justin G. 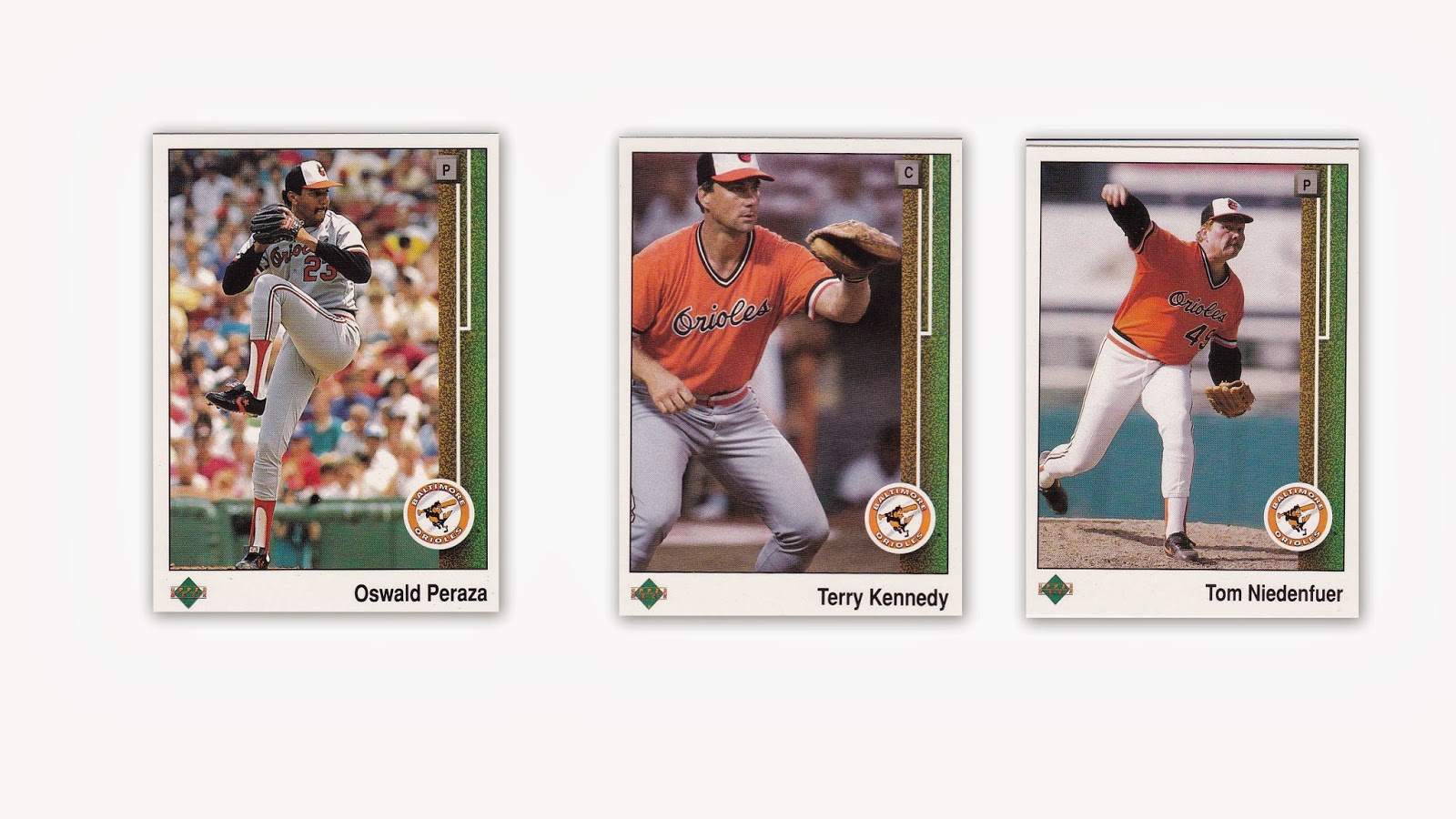 A Trio of 1989 Upper Deck Orioles – For the Orioles Collection

Oswald Pereza was acquired for Mike Flanagan. Good for him. He was a highly touted prospect, but 1988 would be his only season in the minors. Arm injuries stalled his career and he was out of baseball by 1992.

Tom Niedenfuer was a middle of the road reliever who had numbers that weren't horrible for the Orioles. If he was pitching today he'd probably only make $8 million a year.

Terry Kennedy was a veteran catcher who came to the O's in a 1987 trade along with Mark Williamson. After being the number one guy in '87 (hitting 18 home runs while playing in 143 games) he lost the role in 1988 to a young switch hitter by the name of Mickey Tettleton.

All three of these players had a role in the horrendous 1988 Orioles team. A team that ranks as my second favorite worst team of all-time. Surprisingly enough, none of these guys would be involved in the “Why Not?” season of 1989. 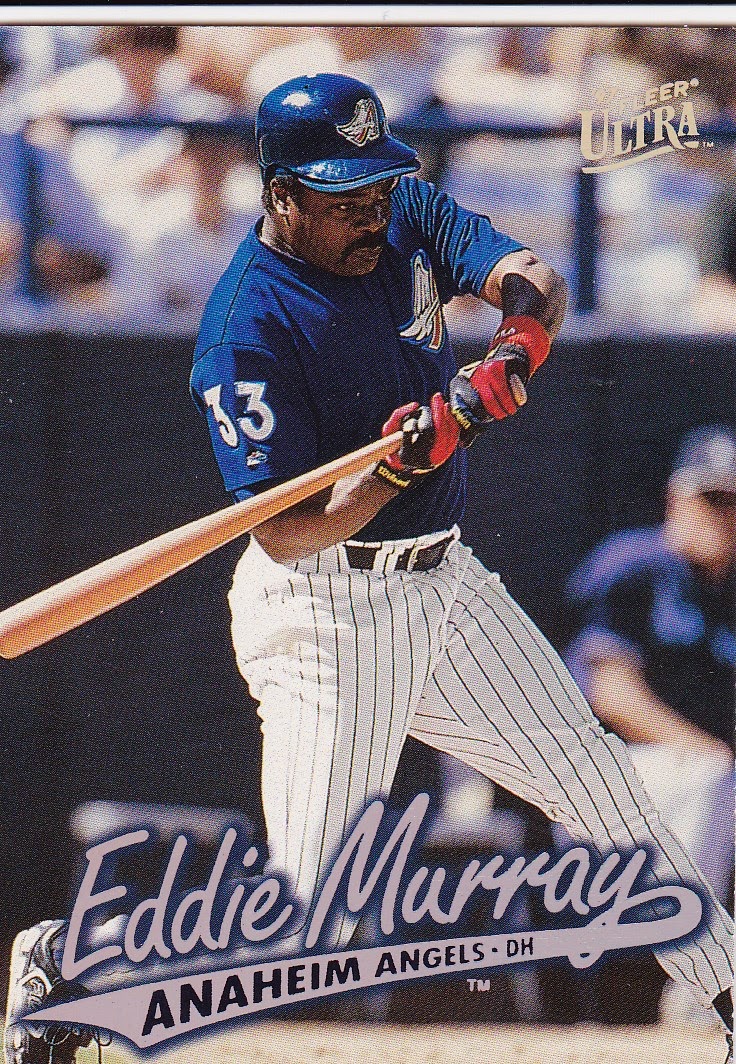 Murray hit the last three home runs of his career in an Anaheim uniform. It's a toss-up between Anaheim and the New York Mets for oddest uniform to see him wear. The rarely seen double batting gloves for him. 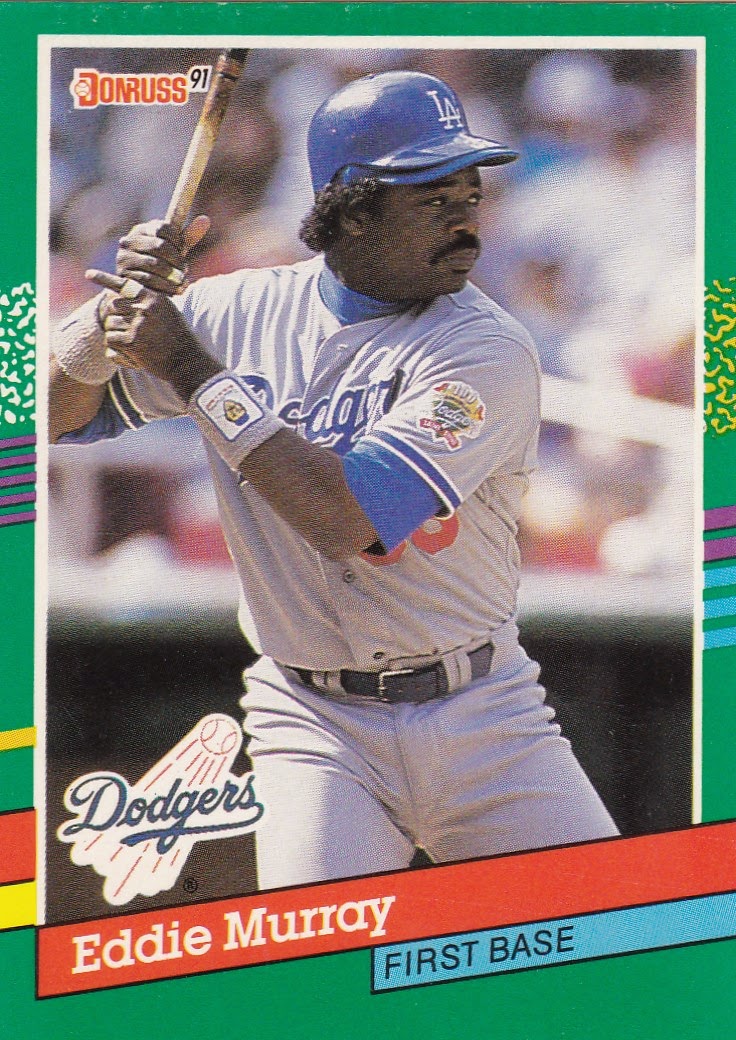 Murray during some more productive years. He is so ingrained in my mind as an Oriole that it's hard to remember that he grew up in California. All uniforms that aren't orange and white look weird on him. Notice no batting gloves. 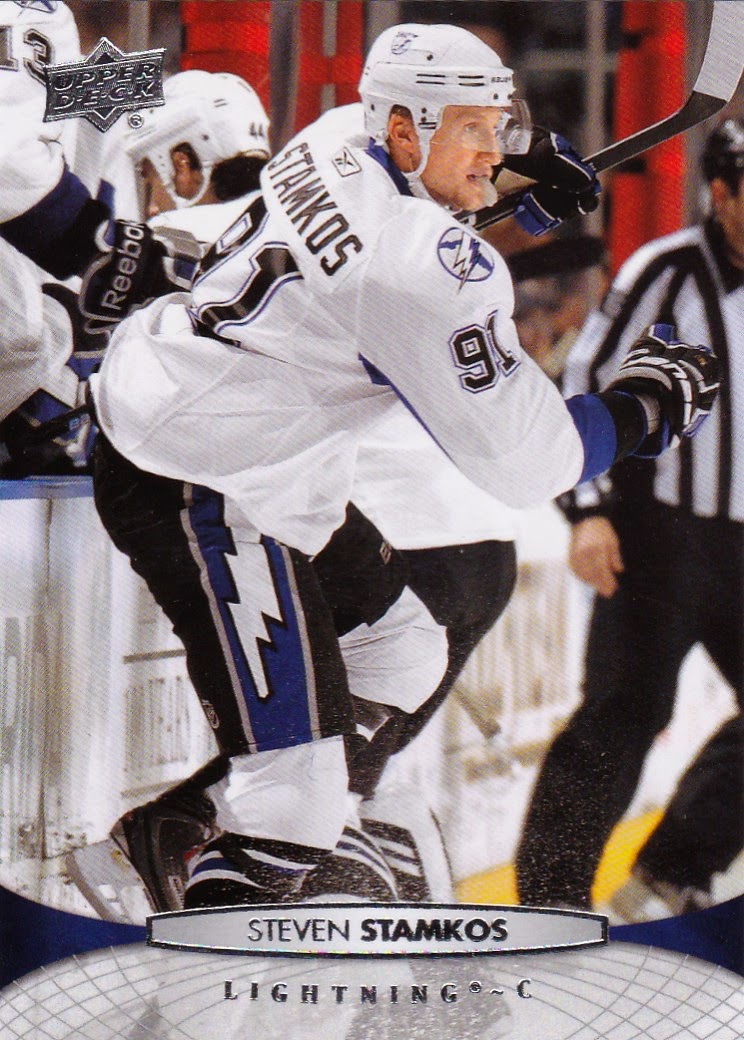 The Bolts are rolling again and Stamkos is scoring. With a relatively easy schedule remaining they can hopefully hold onto the second spot in the division. Great photo of the lightning bolts on the old uniform pants. I miss the lightning bolts. (ed. note - after watching Monday's game I realized they still have the bolts on their pants.  My bad. I'm old.) 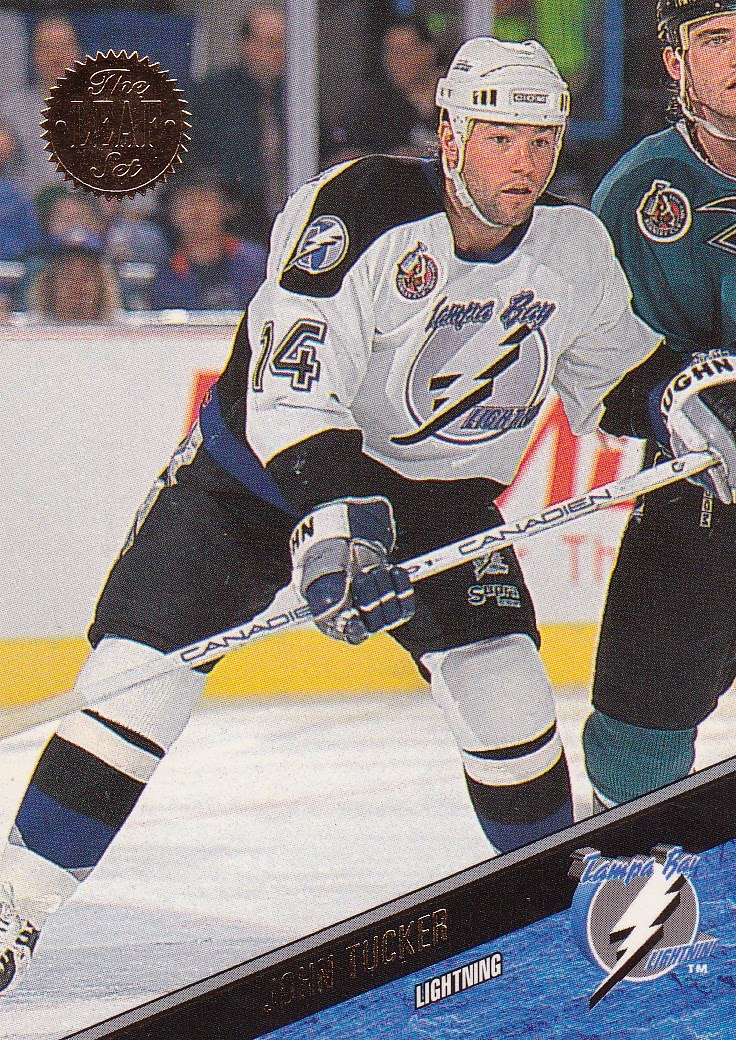 The first trophy winner in Lightning history. His 131 points in a Tampa Bay uniform is good for 19th all time in franchise history, 2 points ahead of “The Captain” Dave Andeychuck. 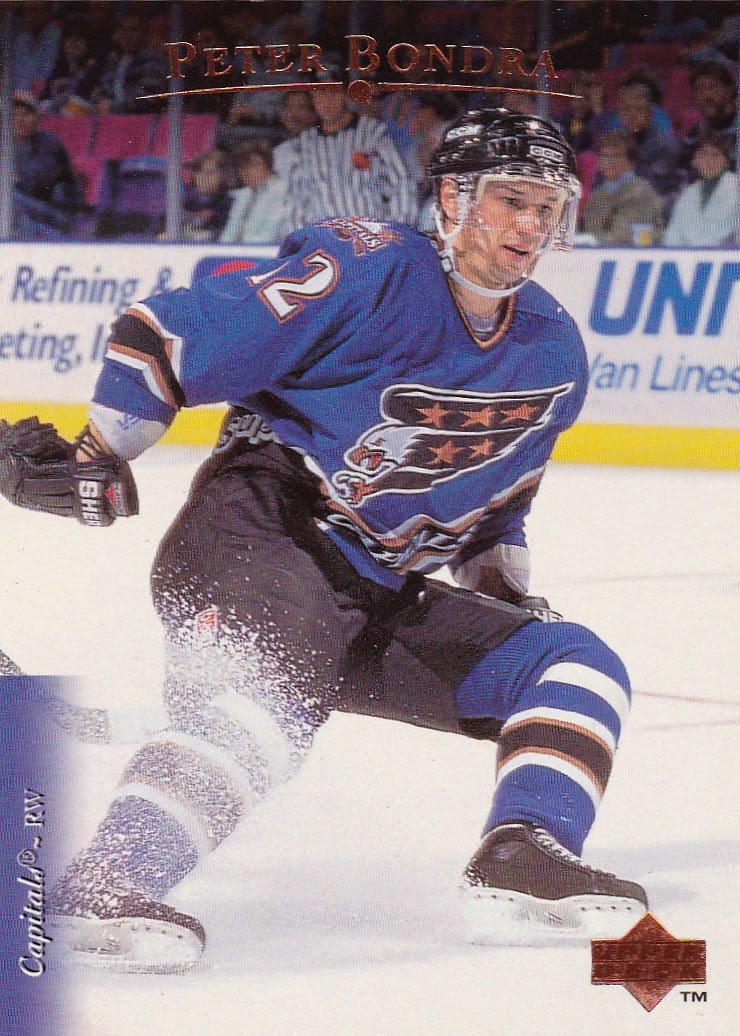 Bondra scored 34 goals in 1994-95, which is pretty impressive since this photo suggests he didn't play with a hockey stick. In his career he scored roughly 674 goals against the Lightning. I really like the simple layout of this set. I'm tempted to go find a box of it and rip open some old junk wax. 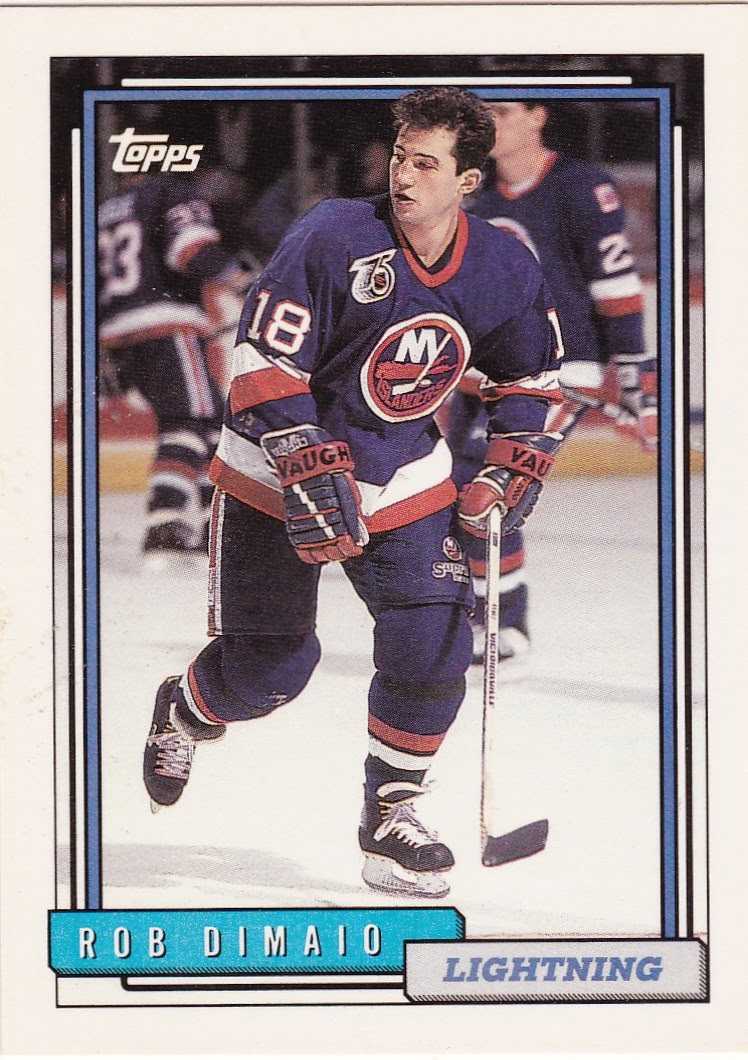 Dimaio was an original Bolt who played two seasons with the team in their infancy. He was traded to Philly for Jim Cummins and a 4th round draft pick. The Lightning then traded that 4th round pick back to Philly for......... Alex Selivanov. DiMaio had a second stint with the Lightning, signing as a free agent in the summer of 2005.  However, a concussion he suffered early in the season ended his career. 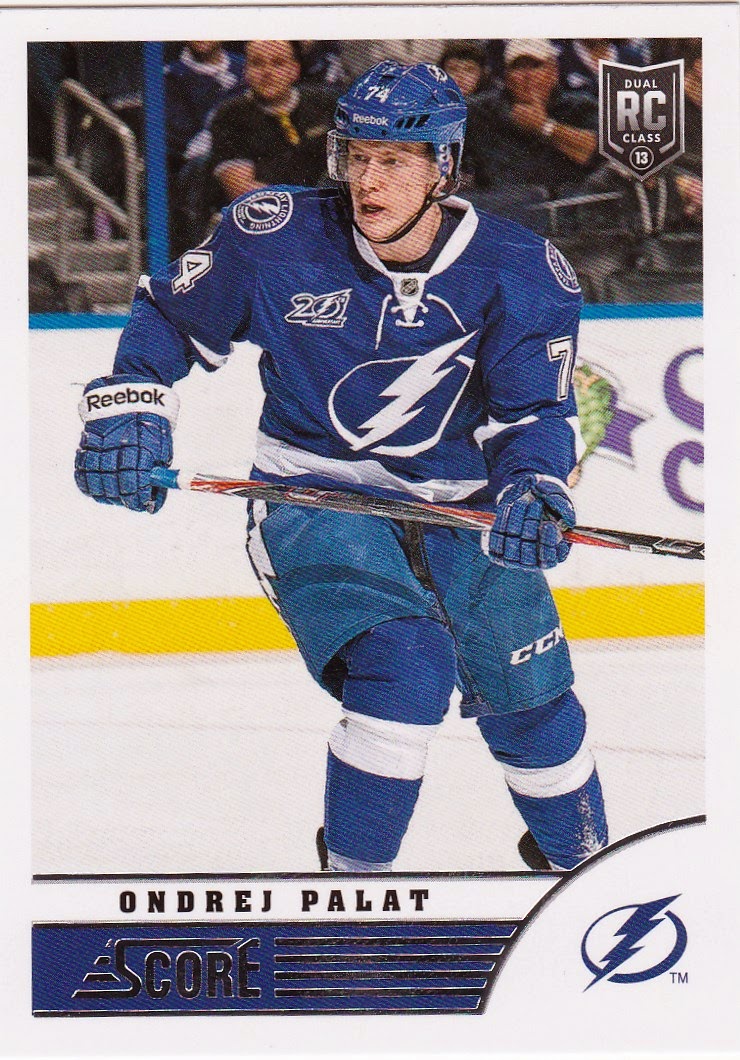 Despite my undying love for Tyler Johnson, I'm pretty sure that Palat has a better chance of winning the Calder. He has been on fire since January. 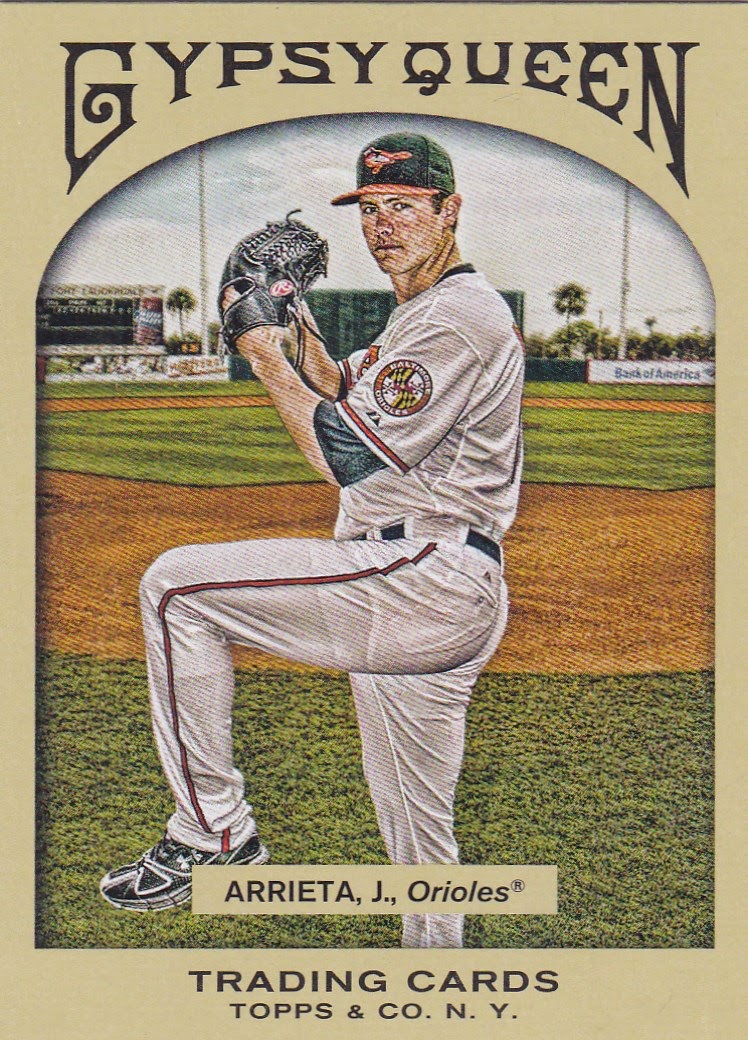 Jake went from Opening Day starter to Chicago Cub in the span of two seasons. I hope he gets a start against the O's when they come into town this summer. As a matter of fact, the O's could also face last year's opening day starter Jason Hammel as well in that series. Chicago – where Baltimore pitchers fade into obscurity. 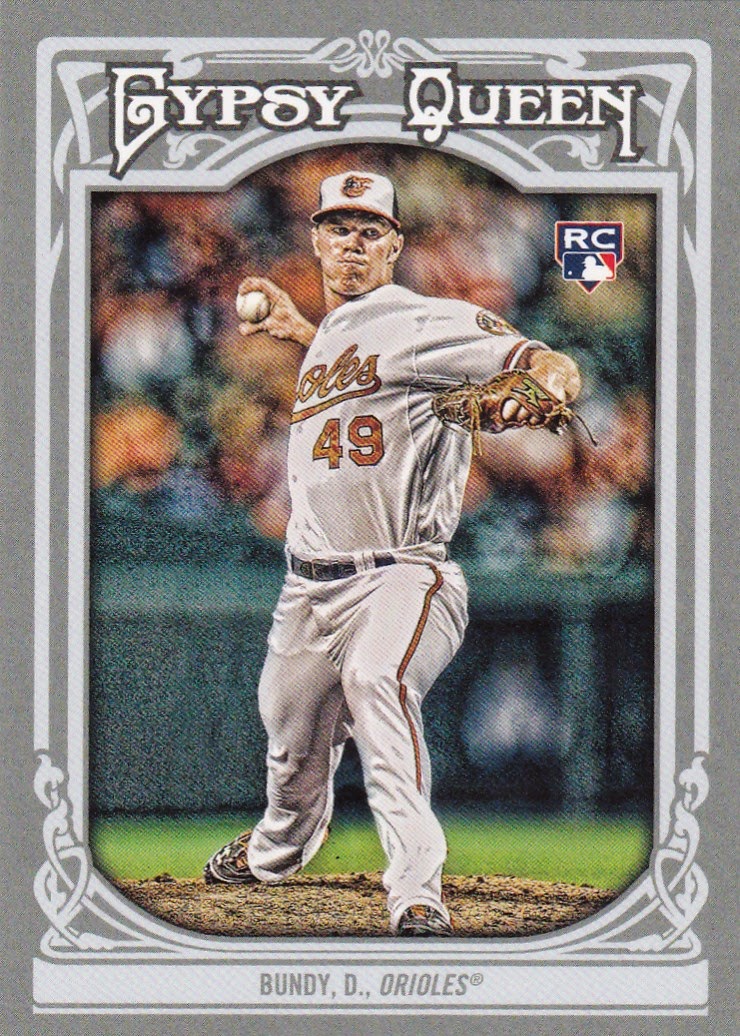 It looks like the best case scenario for Bundy's return from Tommy John surgery is June. Bundy's injury shows that no matter how much care you take with your prospects it's almost impossible to keep them from getting injured. The good news is that (unless you are a member of the Braves organization) most pitchers bounce back from Tommy John rather well these days.

A nice smattering of cards that hit needs all over the board, from set needs to personal collection to team collection. Not a bad return for some extra base cards, eh?