Ravens Lose a Close One So I'll Rip Some Hockey Cards

I just realized that it has been almost three months since I’ve posted anything about hockey/baseball cards.  For a blog that receives the bulk of its web traffic from the Sports Card Blogroll that is damn near unacceptable. So consider the schneid officially off and enjoy a “retro” hockey break.

Last week I managed to get four out of five days off from the hotel.  Not only that, but The Duchess was also out of town for most of that break.  So what does a middle age guy with days off and a quasi-bachelor weekend do in Chicago with his time?  Well, this guy works on his hockey card collection.  Yup, multiple hours of updating photos on Zistle and organizing trades.  Woo-hoo.

One of the drawbacks of organizing the chaos and getting cards sorted and put away is the desire to buy new cards to sort and catalog. Unfortunately, the new Upper Deck (double rookie class!) isn’t coming out for a few more weeks.  And while I do have an income these days, the fiscal wallet squeezing from my unemployed days still looms over my purchasing habits.

However, the urge to buy was too great to be satiated by a value pack from Target, especially once I received the weekly specials email from Dave and Adams.  So, I went online card shopping.  After perusing the bargain isle I decided on a box that offered at least four hits for under 50 bucks. Not a bad value.  So here we go with The Hopeful Chase Box Break Review of:

Ten packs, five cards per pack with 2 autographs and 2 relic cards “guaranteed” along with a BONUS back that contained an auto or relic.  So umm….why not just advertise five hits?

Anyway, I left the bonus pack till last and got to ripping. 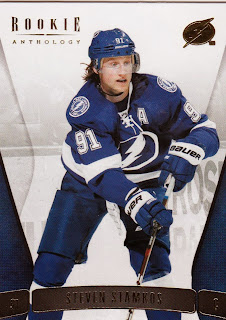 I must say they are pretty clean looking cards.  The simple white background with angled borders focuses attention on the player photo.  I like that the borders coincide with the team colors. It makes for a well put together card that feels and looks a little like SP Authentic.  With only 100 base cards, putting together a full set hopefully won’t be too difficult.

Each pack featured an insert of some sort.  Anthology gets its name by incorporating inserts from other Panini sets. At least I’m pretty sure that is where the name comes from. Sprinkled among the base set were inserts from Crown Royale, Pinnacle, Certified, Contenders and Luxury Suite.

All of my rookies were inserts – with four of them being Pinnacle Dufex inserts. Excuse me, I mean Nufex inserts: 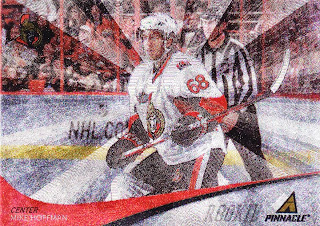 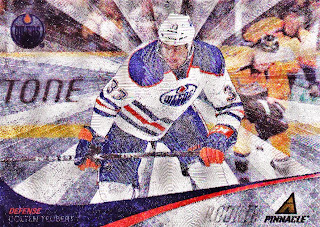 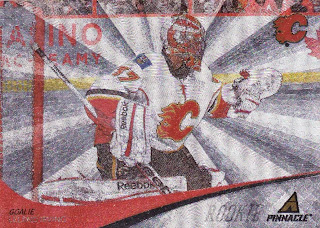 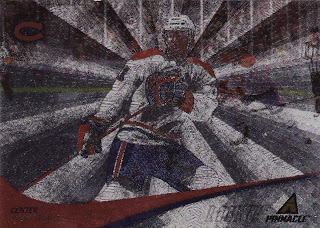 Out of the four I guess Louis Leblanc is the best of the lot.  At least he’s not playing in Germany or Finland. I’m not a fan of the Nufex cards, just a little too busy and hard to make out details.  Some folks love ‘em, though.  Go figure. 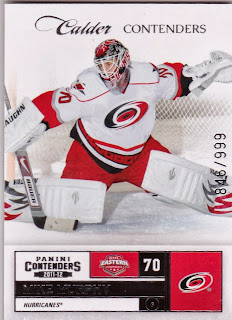 Serial numbered out of 999.  That’s nice.  Mike Murphy is a number one goalie…..in Charlotte. With Cam Ward still stopping pucks and Justin Peters as his heir apparent it would probably behoove Murphy to find a new organization (I hear Edmonton could use a goalie). 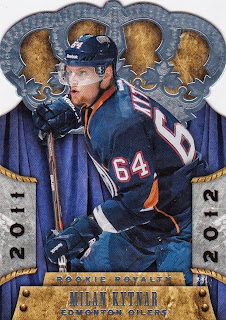 I’m a sucker for die cut cards, especially ones that look like a crown.  The player could have been better, as Kytner is currently playing in the Czech League after appearing in one NHL game in his career. 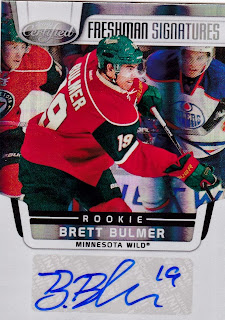 Leaf Certified Freshman Signature Brett Bulmer.  I’m watching the Lightning play the Wild as I type this up.  Bulmer is not playing.  At least not for the MINNESOTA Wild. He’s apparently he’s toiling for the Iowa Wild these days (2 goals in 2 games – maybe he’ll get a call up). 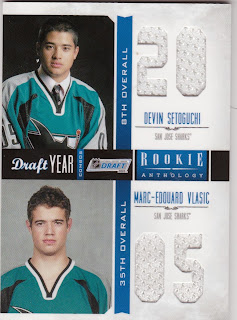 I’ve been eyeing the Vinny Lecavalier/ David Legwand version of this card for a few years now. I like the concept and the execution.  Two white swatches are kind of meh, but overall a nice card.  I think I know someonewho might enjoy this card. 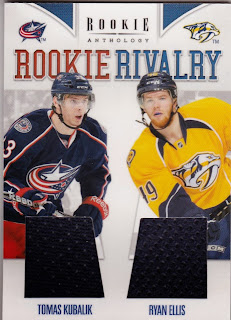 Another nice dual relic card.  I’m not a big fan of the layout, if they went horizontal with this look I think it would be a little more aesthetically pleasing. 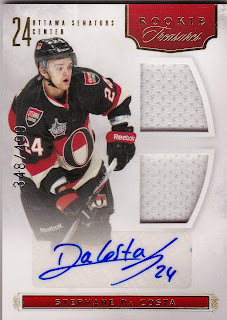 Another card with multiple pieces of sweater on it rounds out my 4 guaranteed hits.  Panini slapped a sticker autograph on the bottom which makes up for them yet another two white swatches.  Is it me or does Da Costa look like he just saw a ghost?

THE BONUS HIT!
I’m not going to lie, I wasn’t expecting much out of the bonus pack.  I’m usually not that lucky.  I was thinking that it would be a nice card of some guy that I had kind of heard of, but was playing in the KHL these days.  Instead I got this….. 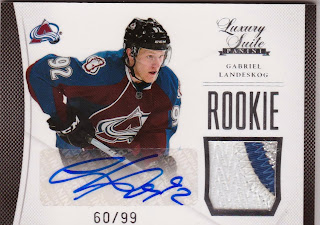 Three colors!
Autographed!
Numbered to 99!
Someone I’ve heard of!
A name that is really hard to spell!

Look it’s hard to have a “perfect” hockey card.  However, the only reason I would knock points off of this card is that it is a sticker autograph. If this was hand-signed I might have to put this in the Perfect Card Hall of Fame.

Even with the slight blemish, this card really made my day.  Not sure what I’m going to do with it yet.

Overall this was a fun break.  I think Dave and Adam http://www.dacardworld.com/sports-cards/2011-12-panini-rookie-anthology-hockey-hobby-boxstill has boxes for about $47 online. Even with 2011-12 not being the strongest of rookie classes it’s still a fun box to rip.  I’ll probably be getting another one and seeing if I can put the base set together….or get enough dupes to send some out for TTM autographs.
Anyone else rip this one back in the day?

I'd like a shot at that Landeskog, if you're willing to trade it. E-mail me at matt-pederson@hotmail.com. I have some decent Lighting and Ravens cards to offer up, if you're interested.

I might be interested in that Mike Murphy, unless you were going to hold onto it. I think I have a Vinnie I picked up at the last show you may need.

Bring back the boxing posts!!

I'll get back to boxing at some point.