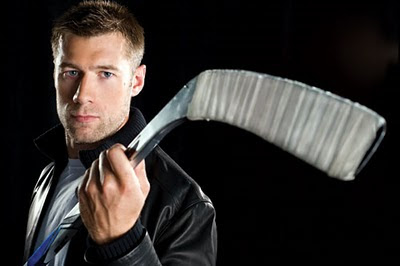 Thursday night in Boston Eric Brewer fired a puck past Bruin goalie Tim Thomas to give the Lightning a short-lived 1-0 lead. The goal was Brewer’s first in the black, blue and silver of the Lightning and showed part of the reason why GM Steve Yzerman picked him up in the weeks prior to the deadline.

It also gave him one more goal than fellow blue liner Mattias Ohlund. The Swedish defenseman has now skate in 121 games for Tampa Bay without scoring a score. In case you were wondering, he does own the record for most games played for the organization without scoring a goal (non-goalie category). According to hockeydb.com Matt Smaby is the only player close and he hasn’t scored in 90 games.

At some point you think he’d be able to just throw the puck at the net and have it bounce off of someone. After all, if former illustrious defensemen such as Sami Helenius, Chris McAlpine, Marek Posmyk and Kjell Samuelsson can score, why can’t Ohlund?

With five years left on his contract, will he score before the Lightning are finished paying him the $17.25 million they owe him? Thankfully offense isn’t his game, and it wasn’t the reason the Forgotten Ones signed him. As reported in the St Petersburg Times he was brought in for two reasons.

“This signing accomplished two primary goals for us. First, we have added the top-two defenseman we coveted to lead our blue line and second, we have found a leader and a mentor for Victor Hedman as he prepares to play in the NHL this fall.”

Has he accomplished those two goals? So far, two seasons in, the answer seems to be yes. Despite some health issues that limited him to 67 games last year and only 54 so far this year he has brought a steady presence to the defense. In fact, despite his injuries he is one of the few players that has survived the overhaul on the blue line over the last two seasons.

So why isn’t he shooting the puck more? Even with all of the offense that the Lightning posses with their forwards, wouldn’t the threat of a fairly hard shot from the point make their lives even easier? Probably, but at this point in his career he seems content to be a physical, stay at home defenseman.

His game has a nasty edge to it, most of his penalties are of the hooking/slashing/roughing type. At 6’4”, 229 lbs, Ohlund has the size to manhandle his opponents and he has been known to land the big hit (just ask Phil Kessel). With the way the team is constructed right now, his physical presence is much more valuable to the team then chipping in 6 or 7 goals.

His mentorship of Victor Hedman seems to be paying off as well. The smooth-skating 20 year-old‘s game is progressing fantastically. While there hasn’t been a dramatic increase in his point production, the mental mistakes and turnovers are down. His confidence with the puck is way up, and watching him zoom down the ice, threading through defenders is great to watch.

The media makes a lot of having fellow countrymen on the roster guiding younger players through their early years in the league. For good reason too. Think about moving to a foreign country to do your job. Wouldn’t it be nice to have someone like you to help with the day-to-day life?

Two seasons into a seven year deal is too early to determine if a signing was a success. It is, however, long enough to know if it’s been a disaster. Having a top two defenseman under contract for $3.75 million a year is not too shabby. With teams around the league focusing on defense, it’s almost a steal.

When he was signed there was a lot of speculation that he wouldn’t see the end of the contract, which with the way it’s structured, wouldn’t be a bad thing for the Lightning or Ohlund. The bulk of the remaining money will be paid over the next two seasons ($5.5 million in 2011-12 and $5 million in 2012-13). During that time he should still be an effective top defenseman who can give the Bolts 17-20 minutes a game. After that, he might decide to move back to Sweden to play out the rest of the career which would give Tampa some cap relief as their younger players start to mature.

Some defensemen bring value to their team by adding offense. Mike Green or Kris LeTang can by judged by the amount of points they put on the scoreboard. Ohlund is not that type of defenseman. So how do you judge if he is effective? By looking at the stats at the end of the game and realizing that he put up 20 minutes of ice time and you really didn’t notice it. He didn’t turn the puck over or whiff on a clearing pass or stumble over his skates chasing a forward (the Cory Cross Special).

You notice Ohlund when he’s clearing out the front of the net or pinning someone against the boards while his partner skates the puck up the ice. That’s how he earns his money. Yet it would be nice to see him get at least one on the board. After all, he can’t retire trailing Kaspars Astashenko in career goals.
Posted by Justin G. at 5:36 PM