Look Who Got Mail!

After a brief one day standoff the U.S Postal Service resumed delivering mail to our apartment building this week. While rain,sleet, nor snow or dead of night will deter them from delivering mail, apparently a broken buzzer will. So on Monday and again on Thursday I had a couple of treats waiting for me after a laborious day at work.

One from a fellow blogger and one from eBay. 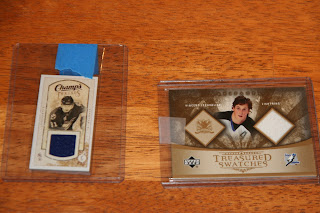 First up - a dark blue sweater from Co-Richard Trophy winner Steven Stamkos. It's a really nice piece from Spicolli's jersey and I appreciate that it isn't white or black like most Lightning relics. The card came from hockey card enthusiast and sure to be nervous Bruin fan Shane over at Shoebox Legends.

It's funny how card karma works. Before I headed up north I saw a cheap Bruins patch card and sent his way. He didn't have anything in return which I didn't care about, but low and behold he busts a box of UD Champs and there is young master Stamkos sitting all alone. Thanks Shane!

Card number two is from the 'Bay. Bored at home due to a depleted checking account I went surfing for some card relief the other day. Lucky for me there is still a few bucks in the ol' Paypal fund so I swooped in on an auction that was ending and ended up with a pretty nice looking card.

It is a 2005-06 (I think) UD Artifacts Treasured Swatches of the Captain - Vincent Lecavalier. It's numbered to 275 to boot! Look at the hopeful, almost joyful expression on his face. It's nice to remember the good times, before the Matt Cooke hit, before the trade rumors, before the circus came to town.

How long till next season?

There ya go, a couple of cards for the collection.

Nice, glad Stamkos arrived in good shape. If you want any Rays/Orioles let me know, I'm likely purging the majority of my modern baseball cards.