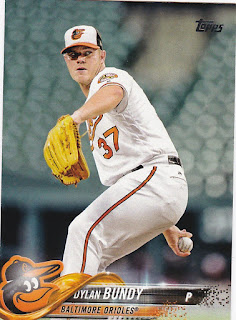 That's right, we're going back to back Bundy's.  That's what happens when you shut down the best team in the league over 7 innings. The O's walked away with a 3-0 win thanks to Bundy's 7.1 innings of 3-hit baseball. He struck out 4, walked 1 and only threw 96 pitches to pick up his first win of the year. That's good stuff.

The first Saturday in May is always a fun day. Baseball is in full swing, the NHL and NBA playoffs are well under way, the Kentucky Derby runs and there is usually a big boxing match. Let's run down my sports day:

Liverpool wins. They kept their Premier League title hopes alive with a dramatic 3-2 victory over Newcastle. Late substitute Divock Origi, who replaced all-world star Mohamed Salah, headed in a free kick that glanced off of his marker and past the keeper. Salah was removed from the game after colliding with the Newcastle goalkeeper, setting up the dramatic late goal.

A long shot wins the Kentucky Derby after the favorite is disqualified. On a muddy track in Louisville Maximum Security appeared to win the race with ease, but an objection was raised. After 20 minutes of review it was determined that the betting favorite interfered with two horses and was disqualified. That meant 65-1 shot Country House was the winner. Chaos is always fun.

Boston and San Jose won their playoff games. They looked good from across the lobby of the hotel I was working in.

The Orioles won thanks to Bundy and Dwight Smith, Jr.'s long home run. It's always fun to beat the best team in the league. The win puts them on pace for 57 victories. It's a little behind what I need, but still within range.

Canelo Alvarez capped the night by outpointing Daniel Jacobs in Las Vegas. It was a close fight with the challenger Jacobs landing some big shots.Alvarez wasn't hurt and methodically picked apart his bigger opponent. With the win, Alvarez now holds the IBF and WBC Middleweight titles as well as the WBA Super Middleweight belt.

It was a great sports day for everyone!
Posted by Justin G. at 12:19 PM