So I finally got myself together in time on a weekend and made it to a card show. While it wasn’t like traveling to the top of Everest, it did require a journey of modestly epic proportions. Was it worth it? Did I blow the rent money on a Gem Mint Floyd Rayford rookie? Did I get stranded in Rosemont? Were there cheerleaders there? Were there any women there? Let’s find out!

The first task on my hero’s journey was to actually wake up before the stroke of noon. For some that might not seem to tough, but those some hadn’t cracked a new bottle of Jamison’s and downloaded the original Legend of Zelda on their Wii the night before. (Sorry ladies, believe it or not, I’m already spoken for.)

Despite a night that ended at 2:30 AM ( I made it through five levels before calling it a night) I was up and raring to go at about 8:30. With a hangover surprisingly absent I pulled myself together in fairly quick order, grabbed some shoes, my white “Pele” edition adiddas (a decision I would rue in the hours to come), and stumbled out in time to catch a westbound bus on Belmont. About 40 minutes later it dropped me off at the blue line “El” station that would carry me the rest of the way to Rosemont.

The ride was uneventful, mostly because I had my nose buried in a book for most of the ride. By the way, I recommend checking out Evelyn Waugh’s Scoop. For a book written in the 1930’s it’s a rather relevant, satirical take on wartime journalism. Along the ride I did spy, Kuma’s Korner, a local, rather well-renowned burger joint that I thought about hitting up after the show.

Getting off the Blue Line about 30 minutes later I hiked the 3-4 blocks to the convention center and came up with a game plan. With admission at a respectable $10 (that was covered by the $13 I had found on the sidewalk the night before) I had to decide how much I was willing to spend on cards at the show. It would only be cards since all I had was a messanger bag to carry my loot around in. I didn’t want to be “that guy” carrying a six-foot cardboard sign of Cal Ripken on the bus.

Fifty dollars sounded like a reasonable sum, more importantly an affordable sum. Now that I was spending my nights getting bombed at home, I wasn’t spending that much money at the bars so I figured I could get away with that and not have to suffer through ramen noodles and soup for the rest of the month.

I didn’t have any of my want lists with me, or even a vague idea of what to buy. I was going to allow myself to be open to all of the possibilities that a card/memorabilia show on the second floor of a convention hall near the airport would be open to.

One other reason that I was heading to the show was to meet another blogger. Sal from Puck Junk had inquired about a card I had pulled from my Leaf Certified box and I told him it was available. He mentioned that he could take care of a significant chunk of my Upper Deck Champs wantlist. A deal was struck and we agreed to meet at the show for the exchange.

It was interesting to meet a fellow blogger. And by fellow, I mean better and more prolific blogger. After all, so far my contact with other bloggers had been through e-mail, comments, trades and a fantasy hockey league. To meet one in the flesh would blur the line between cyber and real life.

We met by the food stand, introduced each other and made some small talk. We hit a couple of booths together and then drifted apart. We were each looking for different things and spent time sorting through different areas. He was on a vintage mission and I was on a…well....browsing spree? We would reconvene just before I left (about 3 hours later) and he showed me what he got…excellent stuff that I’m sure he’ll post on his site at some point.

So enough build up, what does $50 buy you at a card show when you have no plans? Well this…. 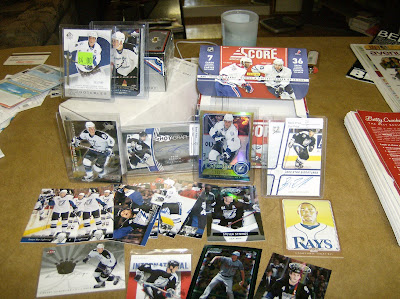 Let’s break it down:
1990-91 Upper Deck Set (with High Number Series) $4.00. My first purchase. Sal talked me into it. I probably have a couple of hundred of these cards, when I first broke into hockey collecting, boxes for this set were insanely cheap on eBay. I split a couple with a buddy, but never seriously finished the set. Tons of rookies in the set with added benefit of mullets galore!

A 2010 Topps 206 Crawford. Nice portrait of the soon-to-be ex-Ray. I’m at a crossroads with my Crawford collection. Due I end it? Do I get rid of it? Do I keep collecting his Rays only cards? It’s a decision I’m postponing until he signs with a new team.

Brian Matusz Bowman Chrome. I’m a big fan of the lefty, and I think he’ll develop into a top of the line starter in the next year. I didn’t spend too much time sorting through baseball. Maybe it was the cold weather, but I was definitely in a hockey mood. There were plenty of booths selling baseball singles for reasonable prices. If I was better prepared I could have made a killing on completing sets.

For less than a dollar I picked up all of the Lightning base cards from the flagship series this year. No need to spend $60 bucks on a box now!

I needed to make it an even dollar so I picked up a Steven Stamkos Leaf Certified base card. It is currently the only Certified card that I own that isn’t serial numbered.

From the shiny to the relatively old I actually managed to pick up seven cards that I didn’t own. I consider that a win!

Random Project that I’m working on that I haven’t told anyone about $8.00

Two autographed Lightning cards. Could I have talked the dealer down a little? Probably, but I was in a good mood so I didn’t. He was engaging and friendly and didn’t take things too seriously. That was worth the buck or two I could have saved.

I have been seeing this box for about $35.00 on the internets and was getting close to pulling the trigger. Being able to get it for ten bucks cheaper and not having to worry about shipping made it a no-brainer. I’ll put a box break together later. Needless to say nothing exciting was pulled, but it was fun to bust an “old school” box.

I did look around to see if there was any one item I could blow the other $9.00 on, even to the point that I was looking in glass cases. There just wasn’t anything that screamed “BUY ME!” so I didn’t. I had made it a point not to buy cards just to but them. They all had to have a purpose. Look at me, I’m becoming responsible.

To sum up. I had a good time. I will do it again the next time a show of that size rolls around. What I won’t do is wear shoes with no support or come unprepared. Want lists are a must - this is one place where you can sit down (or stand) and sort through commons until your heart is content.

I will probably also take the plunge and buy a vintage baseball card. There were countless vendors there displaying vintage (pre 1960’s) cards. Even if I just picked up a common it would be cool to own a card from the 1930’s or 1940’s.


In addition to the millions (AND MILLIONS) of cards for sale, there were various other great pieces of memorabilia for sale. Unfortunately the $40 for the 1970 Baltimore O’S pennant would have put me over budget.

Throughout the day various ball players were signing and posing for pictures. I almost dropped $75 to get something from Eddie Murray signed, but I showed some more restraint and passed. It was tough, I really, really wanted to add a nice Eddie signature to the collection. While the rest of Baltimore was gaga over Ripken, I was a fan of Squeaky Clean Eddie Murray. He was smooth, he hit for power and he was responsible for 30,000 fans screaming “ED-DIE, ED-DIE” at the top of their lungs.

Sadly there were no cheerleaders, but there were women. Mostly wives of older gentlemen who tagged along and looked like they’d rather be anywhere else on earth. You know the look ladies, it’s the one your man gets when he’s shopping with you!
Posted by Justin G. at 9:47 PM

$25 for a box of this year's Score hockey? Nice pickup! Hope you scored big.

Nice post, you got a good deal on that Score box. I purchased two of them from Charm City cards on Amazon.com for $23 a piece but I also had to pay $6 shipping for the two boxes, you beat my price by a buck!

I've got a ton of doubles, look me up when you've busted and sorted!