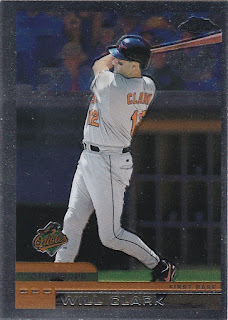 
After getting smacked around the first couple of games against Texas (losses of 17-8 and 11-3) followed by another hard-luck loss for Dylan Bundy (3-1), the Os finally bested the Rangers by smacking 4 home runs and outlasting the Rangers offense.

Mark Trumbo led the way with 2 majestic blasts to left field and plated five of the nine runs. Tanner Scott picked up his second victory of the year by working a whopping 2.1 of shutout baseball. It's games like these where the idea of outlawing the win as an individual pitching stat kind of makes sense.

With a reconstituted starting rotation I fully expect quite a few 9-6 games in the future. The Orioles still have three of their starters that they counted on this season (Bundy, Andrew Cashner and Alex Cobb) but the other two spots are basically open for grabs. Yefry Ramirez started Sunday's game and was less than effective as he was unable to make it out of the second inning. The young righthander has shown some promise in his first stint as a major league starter, but has struggled a bit over his last two outings giving up a combined 11 runs in 6.2 innings.

David Hess returned to the starting rotation on Friday, filling in the spot opened up by Kevin Gausman's departure and fared only slightly better than Ramirez. Hess was knocked out of the game in the fourth inning after surrendering seven runs to the Rangers. It was his first start since June 29th and he ran his disturbing streak of allowing five or more runs to five starts.

The moves at the deadline have laid bare the lack of major-league ready starting pitching in the Orioles organization. With a major rebuild under way they are hard-pressed to find five pitchers that can give them a reasonable chance of winning every day. Should they move Bundy in the off-season, this issue will only be more obvious.

Some of the prospects brought in will most likely be given a chance. Dillon Tate will see a couple of starts as will Luis Ortiz. The problem lies in the fact that all of their pitching prospects could use at least one more year in the minors and rushing them up next season might be detrimental to their development.

While the club will have a ton of money off of their payrolls it's unlikely that they will go after any of the big name free agents (not that there are a lot of exciting names). So the rest of this season could be a preview of next season. The good news is that Alex Cobb, with a full winter of rest and regular training, should be better.

Andrew Cashner could be in a spot to rebound as well as he has been betrayed a bit by a .320 BAbip. With the exception of his ugly start in Arlington he had been producing a string of gutty, respectable outings.

Pitching is going to be the biggest key to the Orioles turning their franchise back around. They are now into their second attempt to "grow the arms, buy the bats" as seen by their recent draft history. Their last three first round picks (Cody Sedlock, DL Hall and Grayson Rodriguez) have all been pitchers. The main problem with that philosophy is that it takes time and their is no guarantee that it will work.

The last time they drafted three pitchers in a row with their top pick produced a decidedly murky result. Bundy was drafted in 2011 and has turned into a starter that can dominate if he keeps the ball in the yard, Gausman never reached his full potential before being dealt awat and Hunter Harvey can't stay healthy.

As I write this all out, it seems quite depressing because there is no immediate fix for their issues. It will be a long two months of this season and another long season after that before Hall, Sedlock, Tate and the rest are conceivably ready to make a difference. In the meantime the best we can make do is by betting the over in every non-Bundy start and at least make some money.