Hamr-time! Lightning Card of the Week 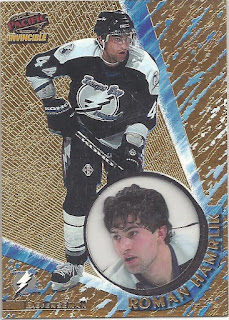 
First of all, let us talk about the card shall we? If there is a set that defines all that was wrong with the the industry in the 1990’s it’s all here in the 1997-98 Invincible set:


Hard to read type on the front – check


One of about 765 sets released by Pacific that year – check


I’m not really sure how “Invincible” is represented by a mostly gold card that is “scratched” away to reveal a sky blue accent.  To me that actually makes it quite “vincible”. It also makes it hard to find cards in good condition as nothing shows chips and dinged corners better than gold foil.


I generally enjoy acetate cards, but for some reason on this card it seems an unnecessary touch. In fact, it gives me a strong impulse to poke it out with something sharp.  The back of the card doesn’t really add much other than another photo and two or three biographical sentences.  There is no breakdown of stats or anything along those lines.


Now for the player. Roman Hamrlik has the distinction of being the first player selected by the Lighting in the NHL Entry Draft.  He was also the first of three players drafted number one over all by Tampa Bay (Vincent Lecavalier and Steven Stamkos are the other two). Other Lightning draft picks from that year include Drew Bannister (2nd round), Brent Gretzky (3rd round), Aaron Gavey (4th round) and Derek Wilkerson (7th round).


Overall, the 1992 draft wasn’t the strongest one in history. While it’s filled with a lot of solid players one would be hard pressed to find any first ballot hall of famers among the list of players picked. Sergei Gonchar (1st round by Washington), Kirk Maltby (3rd round by Edmonton) and Nikolai Khabibulin (9th round by Winnipeg) might get some passing consideration, but none of them will make a voter think, “My God he has to be in the hall!”


As for Hamrlik, he immediately jumped into the Lightning line-up and posted 21 points in his rookie year of 1992-93. He would mature into a steady blueliner for the Bolts, and experienced his best season with the club in the 1995-96 as he racked up 16 goals, 49 assists and 103 penalty minutes for the playoff bound team.


He was also the subject of one of the more entertainingstories from the Lightning’s days of playing at the State Fairgrounds.  As head coach Terry Crisp was about to start a pre-game meeting, he noticed that Hamrlik was missing. The young defenseman was soon discovered fishing beside a duck pond located a stone’s throw from the dressing room. Hockey Paradise, indeed!


After the initial success in his career, the team itself began the gradual descent into mediocrity that would eventually net them Lecavalier as the overall number one pick in 1998. Along the way Hamrlik became more valuable as a trade chip then he did as a defensive cornerstone to build around.  In December of 1997, Hamrlik and Paul Comrie, were shipped to Edmonton for Jason Bonsignore, Bryan Marchment and Speedy Stevie Kelly.  Marchment would end up being the key to that deal as he was later shipped to San Jose in the deal that landed the Lightning the first overall pick that they used to draft Lecavalier.


The Czech defenseman would last 2 ½ seasons in Edmonton before being traded to the New York Islanders in a package that included current Lightning defenseman Eric Brewer. Hamrlik would end up playing for Calgary and Montreal before signing with Washington this season.  He has returned to taking regular shifts with the Capitals recently after spending several games as a healthy scratch around the trade deadline in February.


With more than 1,300 games under his belt, Hamrlik has the distinction of being the active player with the most regular season games played without winning the Stanley Cup. At 37-years-old, his chances of raising Lord Stanley’s chalice are rapidly diminishing.  It would be nice to see him get one more shot at glory even if it means the Capitals are in the Finals.


Despite not having suited up for the Lightning in over a decade, Hamrlik still ranks among the top five all-time Lightning defensemen in games played (3rd), goals (3rd), assists (3rd), points (3rd) and penalty minutes (4th). If there is ever a Ring of Honor placed in the Ice Palace, the name Roman Hamrlik should receive heavy consideration for inclusion.
Posted by Justin G. at 6:54 PM

Which is card of the month? card of weak is good.
Clear Business Cards
Scratch Cards
Printed Gift Cards