Fourteen Hundred Words on Why I Stood in Line

When you’re not working you tend to have a lot of free time on your hands.  So when certain opportunities arise, it’s not hard to find the time to take advantage of them.  On Thursday, Link dropped me a text to let me know that a certain Hall of Famer was signing autographs for free down at the Navy Pier (Chicago’s number one tourist destination). I checked my schedule and saw shockingly I was free.


I then embarked on the hardest part of the day’s journey – finding pants.  Well pants that I could wear in public.  After all, it was Thursday and Laundry Day wasn’t till Friday. It’s important to have things to look forward to when everyday is like the day before it.  After a little digging I found a reasonably clean pair of jeans, said good-bye to the cats (they didn’t even raise their heads) and went off to catch the El into the city.


From where I’m at in Lakeview, the Red Line was the easiest way to get to the Pier.  The Red Line runs north to south and attracts the most diverse crowd of all of the CTA lines.  If you sit on a chair that a bum pissed on, chances are you’re on the red line.  I snuggled into the last seat in the car, the single one in the back that is pointed toward the middle of the car instead of facing front or back.


The car was reasonably packed, and I did what all Chicagoans do – shrunk my personal awareness to just my seat. I whipped out a book (Sin in the Second City) and commenced reading. I tried not to pay attention to my fellow riders, but sometimes you can’t help but noticing them.  For instance the guy in front of me was using a mirrored compact to either put makeup on or snort coke.  I didn’t look close enough to be certain.


After a quick 10 minute ride I jumped off at the Grand location. I would not sit down again for the next 3 hours.  The escalator was out (as usual) so I followed the pack shuffling up the dirty stairs.  The city is working on upgrading the lighting and cleanliness of the downtown stops (gotta impress the tourists), and the Grand stop is about 60% finished. But the stairs are still dirty.


The walk from the Grand stop to the Navy Pier was a little over a mile, I think.  It was nice outside so the walk was enjoyable.  It’s always fun to walk downtown, lots of bustling action going on.  I got to the Pier in a decent amount of time, delayed only a few seconds by the kid running his new remote control car into my ankle.


The Navy Pier in the winter is entirely different than the Navy Pier in the summer.  For reasons unknown to me it is packed during the summer.  Vast multitudes of tourists walk from one end to another, ride the Ferris Wheel, buy overpriced beer from Bubba Gump Shrimp Company, Harry Carey’s, The Billy Goat, or stuff their face with McDonalds and buy Chicago knick-knacks.  A hundred and one river cruise operators shill their boat as the best in the city (for the record the Chicago Architecture Foundation tour is the best) while the Navy boys walk their girlfriends down the long, concrete pier.


In the winter it’s subdued, like a kid who just got reamed out for knocking over the cereal shelf at the grocery store.  The tourists are still there staggering around aimlessly, but not as many.  The chain restaurants have closed up their patios, heck even the churro guy has moved indoors.  No one is hawking a river cruise, after all, who wants to sail down the Chicago River when it’s 20 degrees outside?


They do, however, have a Winter Wonderland around Christmas time, and that’s where I would be obtaining my free autograph.  If there is a 4th circle of hell for middle-aged men who don’t plan on having kids, it’s the Navy Pier Winter Wonderland (presented by Bank of America!).  Housed on the second floor of one of the main buildings on the pier, the Winter Wonderland is in essence free.  However, to do anything you have to pay.


Inside there are all of the child entrapments – giant slide, photo with Santa, motion simulator,  a merry-go-round, and some sort of tilt-a-whirl/hang-glider ride whose sole purpose was to induce ear-splitting screams from pre-teen girls every 5 minutes.  There was cotton candy, sodas, popcorn, churros and I think pure sugar for sale everywhere.


There were families everywhere, so help me God so many families.  I understand why.  Most parents are on week two or three of winter break and need something to distract the children with. None of the parents looked happy to be there, they all looked so tired.  The noise was deafening – along with the screams from the rides, there were the parents yelling at kids, people yelling on their cell phones, random toddlers running around and screaming for no apparent reason.


I wandered over to the indoor ice rink where the autograph table was set up.  It was about 2:45 with the signing set to begin at 3:00. The line was already stretching back a quarter away around the rink.  Although, I think half of the people in line thought it was the line for renting ice skates.


I took my spot at the end of the line and broke out the book.  Based on my autograph line standing experience I knew I was in for at least an hour wait, probably closer to two which would be cutting it close since the session was only supposed to last until 5:00pm.  Even with a strictly enforced “one item only” policy this was going to take some time.


Slowly we trudged along. The family behind me quickly abandoned the mother to go skating or ride a ride or something.  She was there alone with two bags, four jackets and some stuff to get signed.  She also had a camera and managed to take a photo of every person that walked by.  I pity the poor person that had to sit through that slide slow.


After 30 minutes or so we had moved about 10 yards.  It wasn’t looking good, but hey at least I got some good reading time in.  I also got to watch the zamboni clean the ice.  One thing I learned – little kids are fascinated by the zamboni.  If you ever to need to settle down a sugared up, hop-head five year old plant him in front of a machine that scrapes ice. They will be transfixed for a half-hour.


At the hour mark, the line picked up a little speed.  Either people realized they were in the wrong line or they got bored and wandered off.  Twenty minutes after that the count started.  If you’ve ever stood in the line you know what the count it is.  As the signing period draws to a close, the official looking people walk through the line and start counting people to figure out where to cut the line off at.  As they walk bye you hope that they don’t stop in front of you.


Luckily for me they didn’t.  In fact, there were probably another 100 people or so behind me that made it.  However, one unlucky couple who was friends with the mother behind me didn’t make it so they came up to complain – and to cut into the line.  Because, after all, rules are rules but that doesn’t mean they apply to you.


Finally it was my turn to get an autograph.  I pulled out a card, which looked kind of puny next to the sweaters and 8x10’s and poster that everyone else was getting signed.  I didn’t care, I like getting cards signed.  They’re small and portable, they don’t require planning on how to display.  Just throw ‘em in a page and in a binder.


The hockey player was pretty nice.  He asked me what I do for a living.  “Freelance copywriter,” I replied.  Hey, it’s true.  I’ve done some SEO copywriting over the last month.  I thanked him for the autograph and moved on.  Here it is: 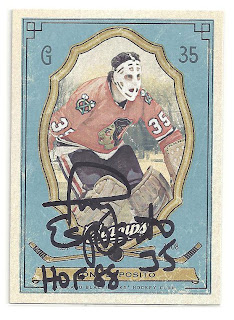 Former Blackhawks goalie (and part-founder of the Tampa Bay Lightning) Tony Esposito.  I now have matching Esposito brother autographs.  I did have to break my completed Champ’s set to get the card, but I think it’s a perfect card to get signed in black Sharpie.


I hustled out of the Wonderland and walked back to the El. As it was now rush hour I squeezed into the car and rode it on home.  After a quick walk down to our apartment I was finally able to sit on the couch and rest my tired feet.  The cats hadn’t moved an inch since I left.
Posted by Justin G. at 4:18 PM

now that was a good read. love how everyone on the el shuts down personal awareness to seat level.

that auto is awesome. nice closure on the 2 brothers.

The last time I was at Navy Pier was a summer night about six years ago. Four of us were walking all the way back to Union Station and it was getting late. If we didn't hurry we'd have to wait two hours for the next train back to Libertyville (where my then fiancee was living). We get to with about a half mile and we run into a road block. Batman (the movie) had blocked off the streets in the loop and we had to detour around them. I thought I'd have a heart attack but we did make it in time.
Maybe it would have been easier to get Tony's autograph at Binny's.

I can fill that hole back up in the Champs set if you want.

Nice! I wish I knew about this. Then again, I went to a Wolves game last Thursday, so I probably would not have been able to do both.

The autograph line for Tony-O always moves slow because he likes to talk to everyone, ask your name, many times thank you for coming.

Was Esposito wearing a suit as usual? He always looks nice at signing events.

Sal- he was wearing a suit and his hair was dyed a robust shade of ebony. Definately more personable than other athletes I've gotten signatures from.