Will a New Man in Charge Bring A Return to the Oriole Way? 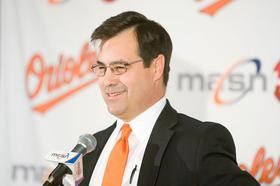 Tuesday was not a bad day for the Baltimore Orioles organization. They introduced a new GM, excuse me, a new Vice President of Baseball Operations, had a pitcher cleared of manslaughter charges and it Chris Jakubauskas headed to the Diamondbacks. That last one doesn’t mean much to the organization, but it does mean that hopefully I don’t have to figure out how to spell “Jakubauskas” ever again.
The news of the day, though, was the introduction of Dan Duquette as the man in charge of putting the Orioles back together again. Sporting a nice orange tie he started his speech not by talking about what he was going to do, but from where he came from. From the story he spun he is a disciple of the mythical Oriole Way. The first ball player he met as a kid was Brooks Robinson and apprenticed at the knee of former Baltimore GM Harry Dalton.
After story time, he got into his philosophy of building an organization, something he’s down successfully twice in his career. Duquette believes strongly that “aggressive scouting will build championships”. For most of the approximately 10 minutes he had the microphone he outlined a broad plan to redevelop the Orioles scouting department and organizational structure to better develop their prospects to either help the ball club or be of use as bargaining chips for major league talent.
He believes that the Orioles need to be aggressive in the international market, something that has been severely lacking in recent years. I’m assuming that means not only the Latin America market, but also emerging markets such as China and possibly Korea. He acknowledged that statistical analysis will be important as well, which is sure to placate the sabermeticians in the fan base.
Those fans looking for a quick fix are going to be in for a bit of a letdown. . During the question-and-answer phase of the press conference he inferred that the Orioles would not be players for the big names such as Prince Fielder and CJ Wilson. The organization isn’t in a position where one player is going to make a difference so it appears he’s going to take those resources and use them to build depth and develop their internal prospects.
That fits in with what he’s done in past organizations. With both Montreal and Boston he worked to develop prospects within the organization and sought out the lower-tier free agents that were low-risk, high-reward type players. Only when a team was solidly built would he splurge on a player like Manny Ramariz (Cleveland Manny not Tampa Bay Manny). It sounds like he’ll spend the next few weeks analyzing the talent within the system, finding someone to take over as the minor league pitching coordinator and install a scouting director.
Though he never said it directly, it looks like the O’s fans have another rebuilding effort to look forward to. There will be no splashy free agent signings this Christmas under the tree, rather some second tier filler to build up the weak spots (namely the rotation). One thing that did appeal to Duquette about the current roster was the strength up the middle with Matt Wieters behind the plate, JJ Hardy at short and Adam Jones roaming centerfield.
I don’t know if there is any significance to him not mentioning Brian Roberts and that could become a sticking point with Duquette’s boss. It’s pretty well acknowledged that Roberts is a favorite of owner Peter Angelos. The millionaire owner might not be as involved with player decisions as he has been in the past, but if Duquette makes noise about severing ties with the longest tenured Oriole it might lead to some friction in marriage.
The new GM will have a short leash with the fans. After the dismal results the Andy McPhail era produced, O’s fans aren’t going to embrace another rebuild with open arms. They want wins on the field. Duquette claims that he wants to follow the Earl Weaver philosophy of “winning every game, every day” but how he’s going to do that next season in an extremely competitive American League East with the roster as it’s now constructed will be a mystery.
The good thing about a new GM is that he has no loyalty to players on the roster or prospects in the system. If another club comes calling for some of the O’s top prospects during the winter meetings, Duquette will be more inclined to listen than his predecessor. Does that mean he’s going to trade Manny Machado and Zach Britton? Not necessarily, but it could be an option should the right deal be on the table.
One moment did bother me a little bit. While answering a question about bringing in free agents he dismissively answered the questions with a chuckle and stated the he, "won't have any trouble getting players to take my money". Apparently, someone hasn't been following the organization's trouble with free agents over the past few years. Hopefully, once he puts the house in order the Orioles will no longer be the "mystery team" that gets left at the alter every off-season.

There is no doubt that the Orioles organization is in shambles. They lack a strong international scouting department. They haven’t developed players at a successful rate. The future aces fans have waited three years for floundered last season. Duquette has pledged to change that. From his opening speech it appears that they are going to follow the Rays model of success instead of the Yankees. That’s not a bad thing, but it does require patience. Patience from the fans and patience from his owner.
The O’s do have a solid nucleus up the middle, and their pitching staff has shown moments of hope over the last two years. It’s not a lot to build off of, but hopefully with Duquette and manager Buck Sholwalter running things there is a slimmer of hope that the Baltimore fans can look forward to playing meaningful games in October.
Posted by Justin G. at 2:46 PM

Well said, and I agree with you for the most part.