Tomorrow, at 9:30am the Baltimore Orioles are going to hold a special press conference.  Unfortunately, it's not to introduce Albert Pujols as their new first baseman, but rather to show off their new jerseys and hats for next year.

Reports are limited, but according to Roch Kubatko, they are going back to a carton bird on the cap reminiscent of the late 1970 style that they had.  That. Is. Awesome.

I'm all for ornithological correctness when it comes to mascots, but the cartoon bird is my favorite logo of all time.  It's also one, like having "Baltimore" on the road uni's, that fans have been asking for for years now.  The fans get their wish and the organization gets to sell some new merchandise (just in time for Christmas!) I'd put this under the "win,win" category.

I know it's not going to change the team they put on the field next year, but sometimes it's the little things that make a difference with an organization.  Getting the small details right show that they are moving in the right direction.

Oh and in doing my 3 minutes of research I stumbled across this article from the past. It's about the 1971 debut of the all orange uniform the O's rocked. 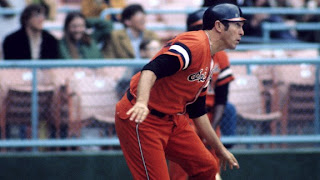 I'm not sure what part is my favorite: Chico Salmon's "It brings out the blackness in me"quote or the fact that Brooks Robinson's sporting goods store filled the order.

Either way, it's a nice way to start off the Diamond Dan Duquette era.
Posted by Justin G. at 4:03 PM