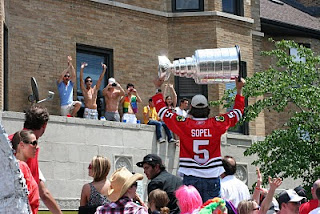 Brent Sopel, no longer a member of the Blackhawks, had the honor of accompanying the Stanley Cup in Chicago's Pride parade last weekend. Surrounded by members of the Chicago Gay Hockey Association, Sopel held the Cup aloft to cheers all along the parade route.

He choose to bring the Cup to the Parade in order to honor the memory of Brendan Burke. Burke was the son of Toronto General Manager Brian Burke. Brendan was killed in car accident just months after revealing he was gay. Check out John Buccigross's stirring tribute for more information. He writes about it better than I am able to.

In an interview with outsports, the former Blackhawks defenseman summed up the experience pretty well: "It was more fun than I expected; it was a blast. Everyone was fun, everyone was dancing."

I can't disagree with him. It's interesting having lived in the south, to see such a large party embraced by the city. In St Pete there was a too-doo about having banners promoting their parade allowed to hang on the city streets. In Chicago local politicians were walking in the parade hand-in-hand with gay relatives.

As someone who dabbles in photography it was a fun spectacle to attend. I snapped about 130 photos filled with fun, color , bizarre characters and just about everything under the sun, although I did miss the Roller Derby teams because I was getting a beer (sorry about that Troll!)

It's estimated 450,000 people attended the parade and everyone seemed to be having a good time. Having spent so much time in the Bible Belt South it was nice to see that no one was condemning anyone to Hell, or yelling that they were sinners. TV stations had floats in the parade as did major corporations (Chipotle and Frito Lay just to name two).

Surrounded by members of the Chicago Gay Hockey Association, Sopel held the Cup aloft to cheers all along the parade route. banners Chicago