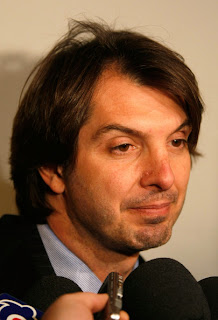 During a break in my new hire orientation I received a text from my buddy Link. He let me know that the last vestiges of the old regime had been swept away. As of Monday morning Brian Lawton and Rick Tocchet were eligible for unemployment benefits. Unable to verify the information online (visiting non-approved websites on the first day of the new job seemed uncouth) I chose to take some time and reflect upon this information instead of learning about the company’s 401k matching.

So what was my first reaction to the news? Well, it wasn’t surprise, maybe understanding and hopeful trepidation would be better words to use. Despite a minimum season-over-season improvement, the performance of the team post-Olympic break sealed their fates.

For the time being Tom Kuevers will be the interim GM tasked with setting up a search for the new CEO. The search, we can assume, has been underway since the day Jeff Vinik took over the organization and should be wrapped up quickly.

The reason this needs to be accomplished post-haste is that the new GM needs to be in place in time to prepare for the upcoming draft (June 25th-26th) and free agency (starts July 1st). Two months is not a lot of time to learn an organization and plan for its immediate future, especially with the chance that the team could acquire a huge rebuilding piece in the form of a top 5 draft pick.

Figuring out which young stud to pick is not the only pile of work on the new GM’s desk. While the Bolts don’t stand to lose too many key pieces to free agency they do have to make decisions on a couple of restricted free agents and a certain young forward who has one year left on his entry level contract.

Signing Steven Stamkos to a long term deal after a 51 goal season is going to cost the organization some money, but not as much as it will if they wait and he has another sensational season. It’s better to get him locked up quickly this summer and get some sort of framework of a budget in place for signing free agents.

One free agent that they’re probably going to lose out on is Antero Nittymakii. The Finland native didn’t play well enough to carry the team to the playoffs, but he did play his way into a number one keeper’s payday. There are enough teams with enough questions in net that are willing to throw a decent sized contract his way.

The Bolts, having to afford their offense, will take a serious look at Dustin Tokarski and give him a chance to win the job in camp. Some salary could be cleared if they find a taker for Mike Smith, and that money could then be spent on a veteran backup. Brent Johnson, Johan Hedberg and Perer Budaj will all be looking for work next season and could be had for less than Smith’s $2.2 million cap hit.

One thing the soon-to-be GM won’t have to worry about, hopefully, will be Vincent Lecavalier and his constant companion – trade rumor. Vinik seems to understand the importance of the captain. While some fans may clamor for him to trade, if the owner succumbed to that temptation then the negative reaction would swamp the franchise. For better or worse the enigmatic center is the face of the franchise. Stamkos might be the sexy scorer and Marty St. Louis might be the team’s heart, but trading Lecavalier will be seen as a major step back for the Lightning. His goal scoring might have declined but he did still throw 70 points on the board, and showed signs of his pre-injury self in the second half of the season.

So whoever takes the unheralded job as the next Lightning GM will be busy this season. Every decision he makes will be second and third guessed. Even if he trades Andrej Meszaros for Evgeni Nabokov fans will complain. Face it, it’s what we do. All we can hope for right now is that he explains his decisions and takes ownership of them. If the team he assembles for next season doesn’t win then he has to be the one responsible for it.

As for the coach…well let’s leave that for another day.
Posted by Justin G. at 8:22 PM

is that the same Tom Kurvers that patrolled the blueline for Montreal in the mid '80's? or a different dude?

I believe it is.