The O’s didn’t lose Thursday night. Of course they didn’t play either, but we need to start with baby steps at this point. The Batless Wonders from Baltimore are entrenched in last place with a paltry 2-14 record. They have scored 46 runs this season – the Brewers scored almost half of that total in their 20-0 win over the Pirates Thursday.

Remember the last time I talked about the Orioles? It seemed like it was ages ago (it was nine days ago). Time moves slower when your favorite team is on the west coast, and it moves like molasses when they’re losing on the west coast. I was really hoping to throw the reverse jinx on them and spark them to some wins. It didn’t happen.

How bad has it become? They’re rivaling the 1988 O’s for the worst team in franchise history (if they lose nine more in a row then they’ll match the 2-23 mark the Woe’s had in ’88). Normally I’m not one to call for someone’s head, it’s too easy to say that the coach needs to be fired, but in this case I think it’s time for Dave Trembley to move on. For some reason this team is regressing underneath his care. 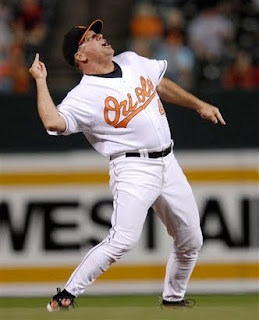 A team can lose and still give their fans hope for the future. There are times when teams, especially young teams, haven’t figured out how to close out games. The 2007 Rays were an example of such a team. The 2010 Orioles, as presently constructed, are not one of those teams.

Their hitting woes are well documented. They rank in the bottom five of the ENTIRE league in average, OPS, runs, and on base percentage. They are dead last in stolen bases – of course you have to get on base to steal bases so I guess it’s not fair to pick on them for that. They’ve had base running gaffes and fielding miscues. Their closer can’t close and the line for the trainer’s office is longer than a Florida unemployment line.

They are in short, a boring team to watch. That’s why there are only 9,000 fans showing up for their games. If they were losing, but still playing fun baseball (you know the kind where a team gets hits and stuff) then the fans would show up. Sure they wouldn’t be happy and spend their afternoons calling Nestor and saying things like, “send dat Adam Jones back to Bowie and trade Bergeson for Ichiro”, but they’d be going to the games.

For goodness sakes the most exciting thing that’s happened with the team in the last week is that Cal Ripken may or may not have asked for a job with a team and may or may not have been turned down. That shouldn’t be the case when you have players like Jones, Nick Markakis and Matt Wieters on the roster.

Which brings us full circle back to Trembley. He’s finally tired and upset with the way the team is playing. Heck, he almost let some non-FCC approved words fly the other night. What he did say was:

I had a meeting with the team as we always do the first day of the series, and our advance [scouting] stuff was pretty precise and I thought the plan was laid pretty clearly. And what I saw last night didn’t sit well with me. I feel like I’m talking to the wall…It hasn’t been acceptable. I’m very patient, but I’ll tell you the truth: I didn’t have anybody come up to me afterwards and disagree.

The “talking to the wall” bit is what tipped me off that it’s time for him to go. Fans like to talk about a coach “losing a locker room” even if they have no idea what is going on behind closed doors. Quotes like this make me wonder if in this case the fatalistic naysayers might be right in this case.

Trembley had a history of being a tough coach who demanded his team to excel at the fundamentals. That type of coach harkens back to the days of the “Oriole Way,” pitching and defense. While the only glimmer of hope is the pitching (with both of the O’s wins Brian Matusz is on pace to shatter Tom Seaver’s 1972 record of 46% of a team’s wins by a pitcher) there isn’t much else to talk about.

The season is far from over and the optimistic part of me that fights to survive in this cynical world says the O’s aren’t done yet. All they need is for a couple of players to get hot, heck I’ll take one player at this point. Stranger things have happened in sports. Much like Dave Trembley I don’t want to see the Baltimore Orioles fail, but with him at the helm I don’t think they can succeed.
Posted by Justin G. at 7:59 PM

I think having B Rob and Pie adds up to a few losses, but I don't know what adds to up to this season. The Os have a very talented team. Atkins is a great add and Wieters, Jones and Markakis should be a year more seasoned and on their way to super stardom... I just don't get it. Obvioulsy at this point firing Trembley is the best thing to do, but who do you replace him with? Just wondering who the options are. I hope they can figure out something to stop the bleeding... I like the new blog, but Im gonna miss the Wasteland... Send me your new addy when ya get a chance. Cheers!