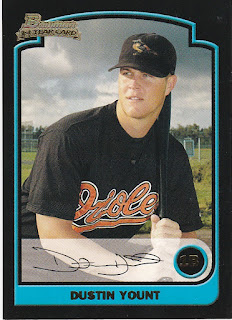 After three series, the O's record stands at 3-5 just like I predicted! Granted they took a slightly different route, but the main thing is that they are still on pace for 60 wins. With an unexpected day off they head back to Baltimore to take on the Rangers. To some fans disappointment, the roster isn't loaded with prospects named Mountcastle, Aiken and Hays. That's not necessarily a bad thing. It's been a long, and mostly successful summer for a lot of the kids in the organization, why end it with the possibility of struggling in the majors?

Speaking of prospects, the O's have a pretty good track record of having sons of major league players wind through their system. Dwight Smith Jr. is currently on the big league roster, his pop played for the O's back in 1994. Currently Preston Palmeiro and Ryan Ripken, two family names Baltimore fans should be readily familiar with, are getting ready to hit the playoffs for Bowie along with Jesmuel Valentin, son of former major league infielder Jose Valentin.

Not all offspring succeed. The Orioles drafted the offspring of one of the greatest hitters ever, Pete Rose, only to see Jr. flounder in their minors before they dealt him to the White Sox. Pete, Jr. eventually had a brief cup of coffee in the majors with the Cincinnati Reds where he picked up two hits in fourteen at-bats during the 1997 season.

One son of a hall of famer that I forgot the Orioles drafted was Dustin Yount. In fact I spent most of the summer thinking this was a Larry Bigbie card.  The son of lifelong Brewer Robin, Dustin was born in October of 1982 less than a month after his dad had gone 3-for-4 with home run and two runs batted in on the last day of the season to hold off the Orioles for the AL East pennant.

The Orioles drafted Dustin in the ninth round of the 2001 draft. He banged around the minors for a few years, getting as high as AA Bowie in 2006. He struggled in 2007 and played the next few years in independent ball before getting another shot with the Dodgers organization. Again he struggled to find his consistency and topped out in AA. He was done playing after 2010 and moved into a role with the Dodgers as an area scout.

In 2012 he scouted he a lanky first baseman from Arizona who made great contact but showed little power. That player - Cody Bellinger. Not a bad signing for an area scout on the job less than two years. He's also the scout that brought Alex Verdugo and Willie Calhoun (part of the Yu Darvish trade with the Rangers) into the Dodgers' organization. That's pretty good work.

Bellinger is an interesting case. Is he the type of player who may not get drafted as more and more clubs rely heavier on analytics as opposed to in-the-field scouting. The Orioles are the latest to gut their scouting staff (something that has happened in previous teams Mike Elias has been part of). Would a 6'4", 170lb first baseman who hit all of one home run in high school show up on a team's radar (even if he's the son of a major leaguer)?

Old-fashioned scouting seems to be passe these days.As the information age continues to spread to college and high-school players more and more teams are relying on analysts to decide their drafts instead of scouts in the field. One of the more memorable clips of the movie Moneyball was the pre-draft scene where Brad Pitt's Billy Beane looks increasingly frustrated as his scouts (including one guy with a hearing aid and another with bifocals) discuss various players with gems such as:

It's a visual and verbal scene showing that the old ways are out of touch.In order to be competitive, teams (especially low-budget teams) have to look at players in a different way. The main point in that scene and others is that teams didn't understand what went into winning games and therefore spent money on players (Johnny Damon in this case) that didn't necessarily contribute as much as people thought to wins.

As "Peter Brand" (a stand in for Paul DePodesta) states later in the movie,

"There is an epidemic failure within the game to understand what's really happening. And it leads people who run major league teams to misjudge their players and mismanage their teams. They're still asking the wrong questions."

Teams shouldn't be buying players, they should be buying wins. That kicked off an analytics revolution that spent the better part of the next decade trying to determine how to find players that can contribute to more wins. What leads a team to wins? Is it on-base percentage or launch angles? Range factors or WAR? It's a process that's still evolving, but it's involving a lot of things that don't appeal to some folks who have been around the game a long time. Some think the "computer boys" are ruining the way the game is played.

Yet, a player like Bellinger could be an argument that there is still value for physical scouts out in the field.An argument that an experienced scout or ex-player can see something in his 17-year-old swing and how he moves on the field that allows him to project how he will develop as as a 21-year-old? Something that an algorithm won't detect.

The answer, as it usually does for such arguments, lies in some happy middle place. Yes, the information that is out there is valuable and should be used by clubs to scout out their prospects, but there is still room for the people that drive from backwater town to backwater town and watch the games.

People seem to think it has to be one or the other and that's just not true. A team that relies solely on the old way of doing things is going to struggle just as much as a team that only relies on analytics to determine who will play for them.  The most successful clubs are able to blend the two together and pick out the players that not only look good to the eye, but also produce in a way that satisfies the analytics and allows teams to project out their future to a reasonable degree.

A team that trains it's scouts to look for more than radar gun readings and home run totals is going to find the diamonds in the rough as well as the players that stand out via the eye test and the analytics readings.
Posted by Justin G. at 8:27 PM

Wow. Had no idea so many former MLBers have children who followed in their footsteps. Kudos to Yount for finding Bellinger. That's a nice name to put on your resume.