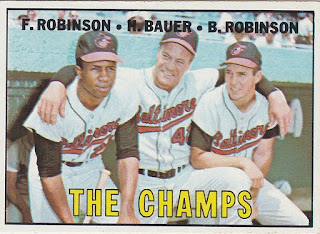 A few weeks ago, The Athletic's Grant Brisbee wrote about the 20 individual season's he'd like to jump in a time machine and go back and see. They ranged from Ty Cobb's 1911 season to Josh Gibson's 1936 season with the Pittsburgh Crawfords. Despite not having Orioles, Brisbee's list was pretty good and worth the price of the subscription.

So in the 65 year history of the Orioles, which season would I go back to in my imaginary baseball time machine? Would it be Brady Anderson's 50 home run campaign in 1996 season? Or the 1989 Why Not season? Maybe it would be the last World Series team of 1983. Or the 1971 team that had four 20-game winners (Jim Palmer, Dave McNally, Mike Cuellar, and Pat Dobson).

Those are all decent choices, but I think there is one really, really good answer: Frank Robinson's 1966 Triple Crown season. After tasting a little success with back to back 90+ win seasons in 1964 and 1965 the Orioles put it all together in 1966 when they won 97 regular season games and then swept the Los Angeles Dodgers in the World Series, holding the Dodgers to just 2 runs (both scored in the first game) in the entire series.

The key to it all was Frank Robinson. After a phenomenal 10 years to start his career in Cincinnati (63.9 WAR) the Orioles acquired him for Milt Pappas, Jack Baldschun, and Dick Simpson on December 9th, 1965. That trio would put up a whopping 5.4 WAR for the Reds in a combined 7 seasons (Baldschun: .1, Pappas: 5.7, Simpson: -.4). Over six seasons for the Orioles Robinson posted a 32.3 WAR all by himself.

Was it the most lopsided trade in Major League history? Probably not, but it's in the running. His first season was by far his best with the Orioles, but the other five weren't too shabby either. With the exception of a wobbly 1968 season, Robinson was good for 25+ home runs, 80+ RBIs and a damn near .400 OBP. Pretty good for a guy that was considered "an old 30" at the time of the trade.

His debut in an Orioles uniform came on April 12th in a chilly Fenway Park. Hitting third, he came to bat in the first inning and was promptly hit with a pitch by Red Sox starter Earl Wilson. Standing on first base he watched as Brooks Robinson launched one over the fence to give the Orioles an extremely early 2-0 lead.  Not a bad way to get the season started.

In his second at-bat, the former Red singled and stole second. He was stranded at third when Davey Johnson grounded out to short. In the fifth, down by a run Robinson cranked the first of forty-nine home runs he would hit that season.  Through three at-bats as an Orioles he was 2-2 with two runs scored, a stolen base and a RBI.  Not a bad debut at all.

He wouldn't get another hit that day as it took thirteen innings for the Orioles to pick up their first win of the season, but he stayed hot through the month of April slashing .463/.585/.976 with 5 home runs and 10 RBI as Baltimore went 11-1 in that first month.

Both Robinson and the team stumbled a bit in May, but around the same time the AFL and NFL announced a merger in June things turned around in a hurry. The team went 44-18 in June and July turning a two-game deficit in the standings into a thirteen-game advantage by the time the Beatles released "Revolver" in the US,  Robinson had 21 home runs during that time span and drove in 55 runs as he made his assault on the triple crown. With Brooks hitting behind him and Boog Powell behind Brooks, pitchers had to deal with him and he made them pay on a consistent basis as he turned in arguably the greatest offensive season in Orioles history.

The beauty of going back to see Frank Robinson's 1966 season is that as an added bonus you get to see the platonic ideal of the Oriole Way - a fundamentally sound team that could hit, field and pitch. They were a top five team in the league in batting average, on-base percentage, slugging and OPS. While the pitching staff wasn't dominating they did strike folks out (3rd in K/9) and didn't give up many hits (4th in H/9). When a team did put a ball in play, chances are the defense made the play. Their defensive efficiency (which measures the balls put into play that are converted into outs) was fourth in the league and they were second (a mere percentage point behind the Phillies) with a .981 fielding percentage.

Brooks Robinson was in the prime of his career, 29-years-old, on his way to his seventh consecutive Gold Glove and seventh straight all-star game. Powell slugged 34 home runs and finished third in the MVP voting behind the Robinson boys. At second base was the rookie (and future Orioles manager) Davey Johnson while hall of famer Luis Aparicio was at short. Twenty-two year old Paul Blair was in center with Curt Blefary in left.

Andy Etchebarren backstopped a young rotation that had Jim Palmer (20), Wally Bunker (21), and Dave McNally (23). Steve Barber was the grizzled veteran at 28 years-old and he went 10-5 with a 2.60 ERA. Stu Miller was the closer and Eddie Fisher, Dick Hall,  Moe Drabowsky and Eddie Watt were also in the bullpen.


So, maybe the best squad the Orioles ever fielded? If it isn't this one, it's probably 1969, a team that maintained most of the same players but had Mark Belanger at short and Don Baylor in left.

Watching the Orioles in the American League in 1966 I would seen Mickey Mantle come to town with the Yankees, a team that finished last with the remaining vestiges of their championship teams. Minnesota, who finished second to the Orioles, were led by Harmon Killebrew, Tony Oliva, Jim Kaat and Mudcat Grant. Boston featured Carl Yastrzemski in his prime while Cleveland had Rocky Colavito mashing home runs and a young kid with a funky windup in the bullpen named Luis Tiant.

Then, in the World Series, I'd get to see a rotation that featured Sandy Kofax, Don Drysdale and a young Don Sutton. That trio was decent, but outpitched by an Orioles staff that threw 33 consecutive scoreless innings. I would have seen Kofax's final performance in a Dodgers uniform, Game 2, where he went six innings, gave up four runs (two earned) and lost to Jim Palmer who threw a four-hit shutout.

I'd  have seen day time baseball and no designated hitters (Palmer had one home run and Eddie Watt had two while Drabowsky hit .364). Chuck Thompson called the games on the radio for the Orioles while Vin Scully worked the mic for the Dodgers.

So yeah, that's the season I would pick if I had a very specialized time machine.  How about y'all? What season would you go back to?

Great post! That was one heck of an O's team, they would be fun to watch for sure. And I like that you added opposing teams to your reasons for choosing the '66 Orioles.

I'm not sure if I'd choose a Red Sox team to go back in time and follow all season-but the '67 "Impossible Dream" pennant winners would make my short list. Plus I'd get to see them play the defending champions ;)

Chris - I don't think we could go wrong with any team in the mid-to-late 60s just to see the Hall of Famers that were in the league at the same time. As for non-Os seasons I think I'd go for 1961 just to watch the Mantle/Maris home run race. Still get Koufax, but also Warren Spahn. I would also grab a a few boxes of Topps and bring them back with me.