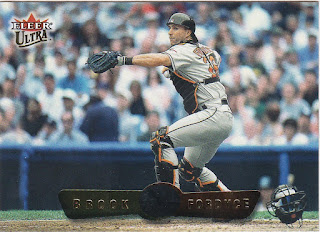 If you had the Orioles taking two out of three from the Yankees on opening weekend, well you're better at this than I am. I was thinking one of three would be good and if they were at least competitive for all three, but lost, that would be ok as well.

Instead, timely offense, Yankee mistakes and a cavalcade of relievers all led to the O's finishing up the weekend in second place, mere percentage points out of first. This could be the high point of the season (if you're a glass half empty person) or the beginning of a super fun summer (if you like the glass being half full).

One of the fun surprises was the animated actions of Pedro Severino. It was a delight seeing him pump his fist after strikes and emphatically position his glove to remind the pitcher where he wanted the pitch to be.  As a former catcher (through high school, at least) I remember there were certain pitchers that needed a little extra support or encouragement. Either they didn't pay attention that much or were quick to get down on themselves if something went wrong.

Watching him pump up Dylan Bundy throughout the first four innings was great. Hopefully, that's something that can continue throughout the season. As for Bundy, there were some positives to take from his start. He only made it through 3.2 innings, but he did strike out 7 and more importantly did not allow a home run. That's something that only happened in 9 of his 31 starts last season and only once in his last 15 appearances.

The five walks were a bit of a bummer and the biggest reason he couldn't make it out of the fourth inning, but it's still a positive start for him. There were five flyballs hit against him, but nothing that came close to leaving the yard. That's quite an accomplishment against the Yankees. He'll get to face them in his next start in Camden Yards this weekend, hopefully the results are the same.

John Means bailed the pitching staff out with a solid 3+ innings of work. He racked up 5 strikeouts of his own by mostly featuring his change-up. It was working so well that he basically broke Giancarlo Stanton  with a change-up to end the jam the Orioles were in in the fourth inning. I'm all for him rolling through the AL East throwing his change-up 45.6% of the time. Just keep throwing it until they hit it.