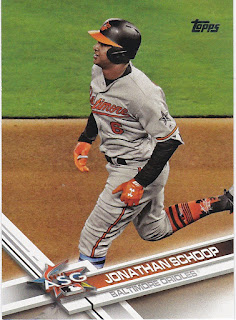 Well, Orioles fans we made it to the All Star break. It was a long, arduous journey from Spring to Summer with too few highlights sprinkled about, but we still made it. The team gets to reset a bit, we can celebrate Manny Machado on the national stage (at least until he is traded mid-game) and then start an earnest look to the future in the second part of the season.

I won't be able to watch much of the All Star Game on Tuesday night (a drawback to working second shift) so it won't have any chance of knocking off my all time favorite memory of the mid-summer classic.  Turn the clock back to 1993 and a young JustinG. (about to enter his senior year in high school) is watching the game take place in his hometown of Baltimore..

The Orioles were playing pretty good baseball as they entered the break with a 47-41 record and only a game-and-a-half out of first place. After a mediocre start they had a scintillating June riding 10-game winning streak to a 20-7 record for the month.

Perennial All-Star Cal Ripken, Jr. was joined on the roster by young right-hander Mike Mussina who entered the break with a 10-4 record. The game would be remembered by most fans for John Kruk wanting absolutely no part of facing Randy Johnson after the somewhat wild left-hander sailed a pitch over Kruk's head:

Oriole fans also remember the game as the birth of the "Cito Sucks" chant. American League manager Cito Gaston, leader of the dominant Toronto Blue Jays, had a couple of chances to insert Mussina into the game. The hometown crowd chanted, "We Want Mike" as the right-hander warmed up in the bullpen during the ninth inning with the AL leading 9-3. Rather than placate the crowd and bring Mussina into the game, Gaston let his own closer, Duane Ward, finish out the game.

After the fact Mussina claimed that he was just getting his regular work in since he was scheduled to start the first game after the break for the Orioles. It has been suggested though, that Mussina was trying to force Gaston into inserting him into the game. By warming up in the very visible bullpen, he knew that the crowd would start cheering for him and Gaston would have to bring him in. He didn't, and the fans weren't happy.

Gaston claims that he had informed the Orioles starter that he would only pitch him if the game went into extra innings so that by warming up on his own he was trying to show the Blue Jays manager up. Despite both sides trying to downplay the incident, they both became a little irritated with the matter as the season went on with Gaston reportedly saying, "By standing up, he showed me he's a person with little class. Screw him. I just won't take him {on the all-star team} next year. ... He showed very little class as a person."

Mussina, who had intended to apologize before hearing that quote begged off by stating that he didn't want to "make any more of a problem". For the record, Gaston managed the AL squad again in the 1994 All-Star Game and did in fact invite Mussina. He actually had him pitch as well. Mussina threw one inning, gave up a hit (Dante Bichette) and recorded a strike out (Barry Bonds).

None of the above contained my favorite moment. The lasting memory for me came the day before during the Home Run Derby. I had secured a ticket somehow, I really don't remember now and sat in the left field stands to watch the stars of the day belt pitch after pitch out of the ball park.  The line-up included Albert Belle, Cecil Fielder, Barry Bonds, Bobby Bonilla, David Justice, Mike Piazza, Ken Griffey, Jr. and the winner - Juan Gonzalez.

That's right, Griffey didn't win the contest despite having the single-most remembered home run of the contest. On that warm summer day in July, Griffey was the first and only player to hit the warehouse in competition. 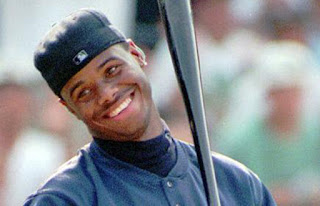 That wasn't my favorite moment - in fact it took awhile for the folks in the left-field stands to even know he hit the warehouse due to the angle of the seats. It wasn't until the roar went up from the crowd that we knew what had happened.

My favorite moment was the home run hit by Juan Gonzalez. A blast that sailed over us in the lower left field seats, over the fans in the second deck of left field and crashed off the facing of the third deck - 473 feet away from home plate. To this day it's the longest recorded home run in Camden Yards history and an ungodly testament to what a human being trained in the art of hitting a baseball can do to a batting practice fastball (the home run comes at :50 of the below clip).

It remains the hardest ball I've ever seen hit live in person (and as a left-hander who occasionally caught too much of the plate with some mediocre fastballs I've seen a lot of pitches crushed) and I'll argue it's one of the hardest balls ever hit in the history of the game.

Gonzalez is sometimes forgotten about when it comes to the fearsome sluggers of the early-to-mid 1990s. His inclusion in the Mitchell Report and in Jose Canseco's book have tarnished his legacy quite a bit (and kept him out of the Hall of Fame), but in his day he was down right scary as an opponent.  Yet, by all reports he was one of the nicest players to ever break your heart with a booming home run. (Late in his career I was lucky enough to get his autograph before a game. He signed for about 30-40 folks at a game against the Rays during his second stint with the Rangers).

He never played more than 155 games in a season due to a variety of injuries, but he still managed 434 home runs. Unlike today's all or nothing home run hitters, he also had a respectable .295 career batting average, a .343 on-base percentage and a .904 OPS.  In 1998 he mashed 47 home runs AND 50 doubles in route to his second MVP award. He was a monster - no wonder he was nicknamed "Igor"

Whenever I see the highlight it also reminds of what it was like to watch the game as a kid. These guys were still heroes to me. I was still playing the game with some inclination of possibly being a major league player (that didn't work out - again the mediocre fastball) and possibly sharing a field with some of those very players.

This was before the strike and before steroids were a thing (although look at that line-up, someone was most likely juicing already). For me there was still more joy in the game than frustration. Hopefully, those moments are still available to young fans. I think there needs to be that belief in the fun of the game and a little bit of hero worship in the younger generations before the jaded skepticism kicks in. Because it is moments like that that carry us through the tough times. A Gonzalez blast or Ripken spearing a ground ball up the middle and spinning a throw over to first are the memories that help when I read about the depressing things associated with modern athletics.

Maybe there was some kid in D.C. on Monday night that was awed by the display Bryce Harper put on and will carry that on as a lifetime memory. Or maybe Machado will do something spectacular in his last game representing the Orioles that will help us get through the back part of this season.

I feel for O's fans, it's been a rough year and the inevitable Machado trade wont make it any easier. Your HR derby story is fantastic, I've never been to a special sporting event like that. I have dismissed Gonzalez, Albert Belle, and others of that era as the "second-tier" cheaters (allegedly) but I've also heard that "Igor" is a great TTM signer and decent guy. He really was a beast in his prime, PEDs or not.