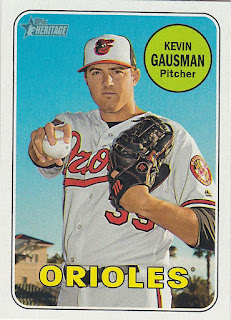 I'm going to have to find some new cards to scan if this keeps up. The Orioles are starting to find their game a little bit.  Is it enough to dig themselves out of the hole they've dug over the first month of the season? Most likely, no, but it is fun to watch.  When this team is swinging the bats at their full capacity they may be the most entertaining team in the league.

As I type this, Manny Machado and Jonathon Schoop just went back-to-back against Chris Archer and there were a bunch of smiles in that dugout (and a lot of sunflower seed tossed in the air.  Has anyone gone on the disabled list with a scratched retina due to a sunflower seed bath? That would be awesome). The nine runs against the Rays on Friday marked the fourth game in a row that they've scored five or more runs and they're 3-1 in those games.  That's what they have to do to win ball games.

It's nice when a starting pitcher mixes in a nice start every once in a while. And Kevin Gausman did that on Friday. It wasn't pretty as he "scattered" 11 hits over 7.1 innings, but he got the outs when he needed and only gave up 2 runs. It was his fifth quality start in eight starts and the seventh time he's worked into at least the sixth inning. Those are the bulldog types of starts that help save bullpens and break losing streaks. With Dylan Bundy suddenly giving up home runs on every other pitch he throws and Chris Tillman hurting, the Orioles needed someone to step up and give them some decent starts. That someone was Gausman.  Hopefully he keep it up for a few more months.