When you get old your memory gets a bit hazy.  And when you have a couple of thousand Tampa Bay Lightning cards in your collection, you sometimes start writing a post about a card you think you have.  Then when you’re done and looking for an image you find out that not only do you not have the card, it doesn’t even exist.  Which leads us to today’s post.

As I was doing research (watching YouTube videos) for the Steven Stamkos endorsement post, I kept stumbling across a video showing all 60 of his goals from the 2011-12 season.  Being a disciplined writer I waited until I was almost done the post to watch it.  It was glorious.  He scored all of the goals. One of the things that stood out (other than the fact that he only had two empty net goals during the campaign) was the number of times Matt Gilroy showed up in the highlights.

For those of you who might not remember him, Gilroy was signed in the summer of 2011 as a free agent for a reasonable 1-year, $1 million deal.  General Manager Steve Yzerman was looking for a defenseman with speed who could move the puck and contribute on the power play.  You know, someone to fill that Dan Boyle-sized hole that hadn’t been filled since the Cowboys era.  Gilroy was cheap and had potential so it seemed like an ok idea.

Besides, who doesn’t like an underdog?  According to the St. Pete Times article about the signing, Gilroy walked onto the team at Boston University and suited up on the blue line, not because that’s what he played growing up, but because that was the only spot open on the team.  He seemed to take to it pretty well as he earned the Hobey Baker award for best collegiate player in 2009.

Here’s how to end a college career.  Walk-on from Long Island switches to defense to make the team, becomes captain of that team, wins award for best player in college, assists on dramatic game-tying goal in the national championship (which they end up winning) and then signs a 2-year $3.5 million contract with the legendary New York Rangers.  Not a bad little story.

Things didn’t quite pan out in New York and when his contract was up they didn’t re-sign him.  Paired up mostly with Marc-Andre Bergeron, Gilroy played pretty well for a Lightning team that struggled to capture the magic that had propelled them to the Eastern Conference finals the year before.  While the team might have had troubles, a young Steven Stamkos was an unholy terror on the ice.

Having refined his game from a kid with a big slapshot from the circle, Stamkos was scoring from every way from everywhere.  Slapshots from the circle still went in, but he was also in front of the net deflecting goals or tapping in crazy passes from Marty St. Louis and Vinny Lecavalier.  He was dekeing goalies and snapping wristers past them.  And there, on the blue line, was Gilroy setting him up. 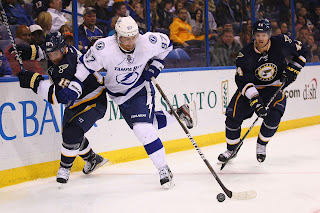 Matt Gilroy had 2 goals and 17 assists in his too-short Lightning career.  His first point was a primary assist on a Vincent Lecavalier goal on October 17th.  He would assist on a Stamkos goal that night as well.  His next four points were also primary assists on Stamkos goals. In all he would assist on 6 of Stamkos’ 60 goals. His production and ice time would pick up when Victor Hedman was sidelined with a concussion. With the Big Swede on the sidelines, Gilroy would see upwards of 20 minutes a game.  When Hedman came back, the former Boston Terrier would see his ice time dwindle and eventually he was traded to the Ottawa Senators for Brian Lee (who would also assist on 6 of Stamkos’ goals).

Gilroy would help the Senators make it to the playoffs but would find himself a free agent again after the season.  The Rangers signed him to an AHL deal during the lockout and he did play his way onto the roster once the season resumed. However, he only appeared in 15 games and failed to register a point.  His last season in the NHL came in 2013-14 with the Florida Panthers where he recorded a goal and an assist in sixteen games.  He is currently playing for Spartak Moscow in the KHL where he has 15 points in 49 games.

To this day he is the only player to wear the number 97 for the Tampa Bay Lightning.  The reason for choosing that number is a bit heart-breaking (seriously how has Disney not done a movie on this guy yet? Are they waiting for him to return from Russia to help the Islanders win a Stanley Cup or something?)

In my mind Gilroy was with the team much longer than 53 games.  Maybe it was because the Lightning churned through so many defensemen that year.  Along with Gilroy and Lee there was Brandan Mikkelson, Keith Aulie, Bruno Gervais and Evan Oberg, all youngish players who were brought in to fill gaps in an aging blue line. Other than the 21-year-old Victor Hedman the other regulars on defense were 31 or older.

In fact, I thought he was around long enough to have a card produced with him wearing a Lightning uniform.  Unfortunately he wasn’t. So let that be a lesson to you kids.  If you have an idea for a post that you want to shoehorn into a reoccurring gimmick, make sure it actually fits before you spend an hour writing it. 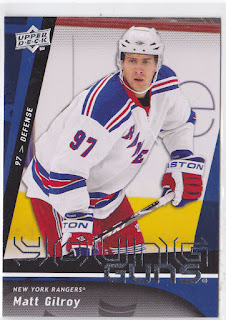