Some Thoughts on Stamkos 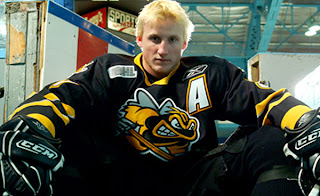 So what should we talk about now? The Bolts are really trying to get me to talk about the O’s aren’t they? They've polished off almost all of their off-season business with almost two whole months before training camp opens. Whatever will we discuss? I already blew my wad on the Ryan Malone to Toronto trade post so I can’t bring that up again until it actually happens (my prediction August 13th).

If you’ve been away from the internet for the last 48 hours then you might not be aware that Steven Stamkos is once again a member of the Lightning in full standing. He is also an extremely wealthy young man having inked a contract that pays an average of $7.5 million a year for the next five years.

I wonder what the first thing he’s going to buy with his new contract? It’s not like he was playing for minimum wage the last three seasons so he’s got the nice car (apparently Ryan Malone’s old Mercedes SL500) and big screen TV. What now? Steve if you’re interested feel free to bid on some of my auctions - help a blogger out, eh?

Hopefully, some of the dough is spent on whatever equipment helps him rehab from whatever injuries he picked up last season. A little less then a year ago I mentioned that he was hurtling his way into a can’t win situation by being so talented so early in his career. He’s also been known to press a little when things aren’t going right so will the hefty contract add to the pressure or will the security of a semi-long long term deal ease his mind and let him focus on the ice?

Speaking of the contract, it really is a perfect deal for both sides. Stamkos gets paid, and the chance to make another big pay day when he should be in the prime of his career and the Lightning aren’t bound to a long term commitment that might be damaging when the new CBA is rolled out following next season (or if the higher ups are learning anything from their fellow leagues - sooner).

There are a lot of relieved fans in the Tampa area now that Stamkos (and Teddy Purcell!) have signed their new deals. Personally, I was pretty confident that he would stay with the Bolts, but there were some moments when enough lingering doubt crept in that I verbalized scenarios involving him signing an offer sheet with another team. It was probably around the 29th of June or so when I had the most doubt, but once free agency came and the biggest rumored names out there spent all of their money on players not names Stamkos I knew things would be alright.

I think fans forget how important losing four first round draft picks would be for a franchise. After all, look how much flack Brian Burke is getting for trading away two for Phil Kessel. Add to that the lack of maneuverability in the cap (I always thought the Bolts would match any contract up to $9 million a year) and the cons just really outweighed the pros.

So where does that leave the Lightning? The main core of last season’s squad is back. Sure some spare parts have been jettisoned, but their production should be replaceable. Should this team be expected to return to the Eastern Conference Finals? Should they contend with the Caps for division glory?

On paper all signs point to yes for all of those questions. The Lightning are a very well built team. Mr. Yzerman has quietly improved their defense over last year and while resigning Roloson doesn’t do much for the long term net minding issue, it does at least give them stability for next year.

I fully expect the Bolts to score more goals next year. Stamkos should be good for 45-50 (if not the pessimists will surely call for his head), Vincent should return to his 25 goal plateau and Marty St. Louis - well I’m never going to count that guy out. Even when he’s 50 I wouldn’t be surprised to see him pot 30 and get 60 assists. With increased time on the top lines I wouldn’t be shocked to see Purcell put 25 goals in the net as well.

Shocking the league for one year isn’t that hard, continuing that success when everybody expects it is. The Lightning aren’t going to be the fun, scrappy team with the new coach and his exotic offense any more. They are entering next season as the team that was one goal away from the Stanley Cup Finals last year. They are the team that knocked two of the NHL’s most heavily promoted teams out of the playoffs last season. The target is now on their back. How they respond will show if they’re a team to be truly reckoned with or a one-year fluke.

There will be a lot of speculation and ink spilled over the next few months in regards to this team and it’s expectations. What do you guys think? Are the Lightning a real contender next season or were they over their heads last year?
Posted by Justin G. at 3:52 PM