Oh Wait, Is it Time For Hockey Again?

Picture if you will a faceless goalie skating in his crease in a darkened arena. He is alone, all of the action is taking place on the opposite end of the ice distant and blurred. A voice, not unlike the late great John Facenda, narrates:

“Age catches up to all athletes. The goaltender, now in the twilight of his journeyed career feels it more than most, feels the time dwindling away. Is this his last chance of glory? He watches as players half his age shuttle the puck back and forth, suddenly the action changes direction and his mind clears, his focus not on the years, but on the mass of humanity hurtling his way and on the sliver of frozen black rubber that, like time, he must prevent from getting behind him”

Look reporters, we get it. Dwayne Roloson is old. He’s on the wrong side of 40 for a professional athlete. And Tim Thomas ain’t no spring chicken either. So far that seems to be the number one story heading into the Eastern Conference Finals between the Lightning and the Boston Bruins. Old goalies. 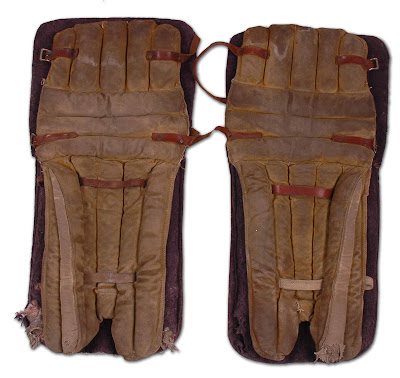 Contrary to popular belief, these are not Roloson's first goalie pads.

For me, they cancel each other out. Both net minders have been excellent at stopping shots in the post season. They’re probably going to continue their excellence over the next two weeks. The story of this series is going to be decided elsewhere.

I’m not going to lie, I don’t know a lot about the Bruins. I know they finished with the same exact record as the Lightning, scored about the same amount of goals in the regular season and gave up a lot less. That would lead me to believe that they play decent defense. They had a really tall defenseman. They have a highly touted rookie who might see some playing time this series due to a concussion suffered by Patrice Bergeron.

It seems every time I hear Nathan Horton’s name it’s because he’s scoring a game winning goal. Mark Recchi is still playing well. The Lightning have won just 4 games in Boston in their history. Yup, that’s about all I know.

So what kind of preview is this? Well an uniformed one obviously.

Look, it hasn’t mattered who the Bolts have played in the postseason. They play their style regardless of their opponent. If they execute and stay within the system they can beat whoever lines up against them. It’s that simple.

If you’ve followed the Lightning at all this season you know they struggle when they get impatient and try to force the action. When they relax and settle into Coach Boucher’s system good things happen. If you haven’t followed Tampa Bay and you came here to get an informed synopsis, well you’re lost. Back up, make a right at ESPN and point your browser to Raw Charge. They’ll hook you up.

I will leave you with some do’s and don’ts for the Lightning to win this series:

Do - Continue to score on the power play. Tampa comes into this series with 12 extra man goals while Boston only has two. If they win the special teams penalties they position themselves to win the series.

Do - Kill penalties. Kind of related to the first point,

Don’t - Take penalties. Through the first two rounds there seems to have been an endless parade of Lightning players marching to the penalty box. While they have been able to kill the vast majority of them, it has hurt their offensive game by mixing up their lines and limiting the amount of time they can attack their opponents zone.

Don’t - Try to battle the Bruins physically. Boston will try and lay the hammer down on the skilled forwards of the Lightning. They (I’m looking at you Mr. Downie) can’t be drawn into retaliatory penalties. Beat them on the scoreboard.

Don’t - Get frustrated. The Bruins have a trap of their own that they like to play. They won’t be as aggressive as the Capitals, nor suffer as many defensive breakdowns as Washington did. Don’t force the offense.

Do - Attack with speed. It is the Lightning’s greatest weapon.

Do - Continue to block shots. 233 shots blocked so far this post season. That, more than any other stat, shows why they’ve made it this far.

Don’t - Get freaked out by past stats. Yes the organization hasn’t enjoyed a lot of success against Boston, but these are different times.

It should be a highly entertaining series. The teams are relatively fresh. Both teams are hungry for the cup. The time for talking is through, no it’s time for it to be settled in the rink.