For some reason the Tampa Bay Lightning have four days between games.  That means either I have to write about something else (yeah, missed the Ravens game again) or come up with something vaguely related to hockey but not based on anything directly game related.

So that means another hockey card post.  I guess I could have gone another way and written about the government shutdown and its long term effects on education, defense and overall trust in government, but then you would know that someone had hijacked my blog.  Politics or in-depth insight into something that actually means something in the world?  C’mon.

Instead of all that rigmarole let’s talk about Steven Stamkos and young Steven’s goal face.  Not sure what I’m talking about?  Neither was I until about five days ago.

As I mentioned in my last post I was jonsing for some new cards, so along with box of Rookie Anthology, I bid on a twelve card Stamkos lot on eBay.  I won. Yea!  A couple of days ago I received the package in the mail and flipped through the twelve new Stamkos cards (along with a couple of extra Lightning cards the seller threw in.  Thoughtful sellers are truly the blessed among us).

It’s always fun to get new cards in the mail.  Not only does it fulfill that deep desire to complete things, but there is also fun in noticing the details of the cards.  Things like different action shots, different uniforms, background details (empty seats, random players, etc) are always fun to look for.

With the Stamkos one detail emerged card after card. The slick-scoring center has some weird looks on his face.  In fact, he’s the complete opposite of Ridiculously Photogenic Marathon Guy.  For example
Stamkos’ 2012-13 Upper Deck card: 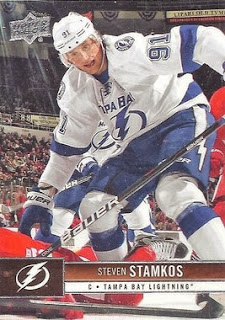 That’s umm an interesting face, Steven.  Surely this was just a result of the odd camera angle, the rest of his cards feature a slightly less deranged picture of Stamkos, right?
2012-13 SP Authentic: 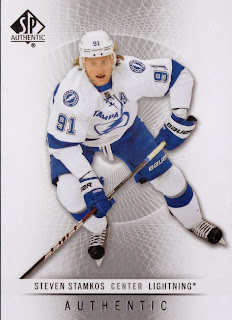 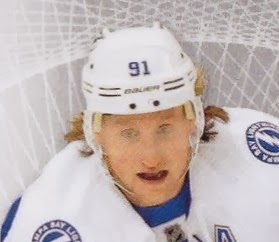 OK. (Bonus points for the solid lettuce flowing out of the helmet)
2012-13 UD Ice 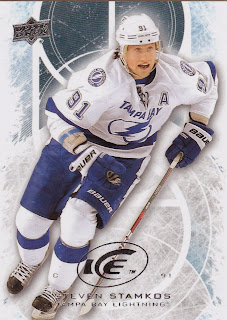 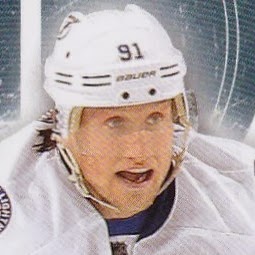 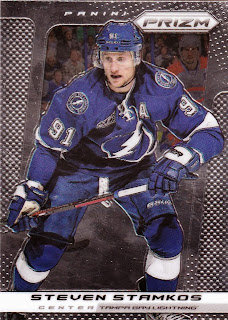 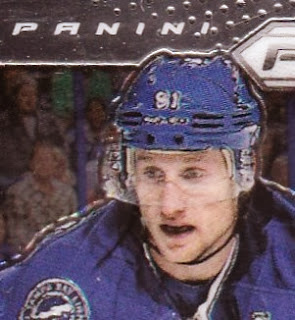 Nope. The huge visor doesn’t help either. Next? 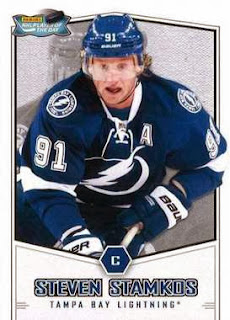 I’m going to say he’s just tremendously focused on the puck.  Then again he has scored 10 points in 8 games and 396 points in 381 games so if it works him I guess I’m cool with it. A few more for your viewing pleasure.  Bonus points* if you know what sets they are from.

*Bonus points are valid for absolutely nothing.
Posted by Justin G. at 5:05 PM

Having Toews as my main PC guy I think he may have the worst faces in the history of hockey cards. If you ever get bored check out a few of his cards, you'll never look at them the same way!