Hey, Look Who's Finally Posting Something About Carl Crawford! 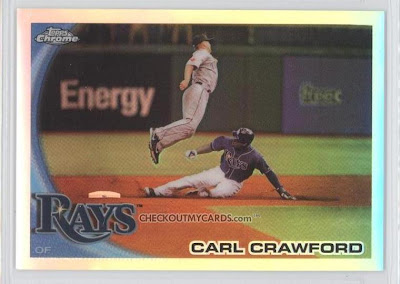 One Hundred. Forty. Seven. Million. Dollars. That’s a lot of money. Even in the convoluted world that is major league sports it’s a lot of money. Enough to walk away from the only franchise he ever knew. Enough to say good bye to a fan base that adored him (when they were involved enough to care). Enough to sign with a division rival so that those same fans can see him in the opposition’s colors 18 times a season.

I thought I would be more upset at Carl Crawford. Of course, I also thought there would be a Festivus miracle and the Rays would announce that they had resigned the four time All-Star from Waco. And yet here we are. Crawford flashed his charming smile as he donned the Red Sox jersey and I merely shrugged my shoulders and flipped the channel.

Twelve year old Justin G. would not have handled it so well. There would be moping, perhaps some tearing up of cards and other means of youthful, yet ineffective protest. It’s kind of sad to think that I’ve grown past that level of fan-dom. The blind, passionate devotion to a player or a team that kids possess. Kind of like believing in Santa Claus.

Tampa Bay Rays’ fans are at a crossroads. For the last three years they’ve tasted success, now they’re paying the price for that success. Other popular players had been moved out before, most notably Aubrey Huff and Scott Kazmir. Neither one of them had the cache of Crawford, though.

He was the one that had been there the whole time, the many years of the bad and the few years of the good. He had come up through the system, been the one constant through the long years. It was only in the last few years that Crawford had started to garner the adoration on the national level that had always been present on the local level.

Early in his career he relied on pure speed, lacking the mechanical fundamentals of more polished runners like Rickey Henderson or Vince Coleman. Few things were more fun then watching him leg out a triple. Rounding second it often looked like he was running two fast for his body. Arms wind milling wildly, legs churning it was a wonder he didn’t fall down more often.

I’m sure someone could look it up and dispute it, but it seems like nobody in the league got to two strikes faster than Crawford. It seems like he was always hitting 0-2 or 1-2. Sometimes he would concede to the two strikes and slap the ball on the ground to the left side. More times than not he would beat the throw out. Other times he would hack away, without a care in the world. Few batters look worse when they swing and miss, or look better when they connect and drive the ball a surprisingly far distance.

For years he toiled in obscurity. So long it seems impossible to believe he’s not 30 yet. I have a lingering image of him standing in left field with his hands on hips as Jesus Colome, Jae Kuk Ryu or Tanyon Sturtze jogged in from the bullpen in route to another 8-4 loss. He looked like a man who wanted to be anywhere else.

Yet in 2005 he signed a long, team-friendly extension. The rumors of the Rays dealing him away quietly died down and after Rocco Baldelli’s role on the team succumbed to health issues Crawford emerged as the face of the franchise. To Rays’ fans he was “our guy”. Maybe the rest of the league didn’t appreciate his talents, but for the loyal 10,000 fans in the TBA he was more valuable than Manny or god forbid - Jason Bay.

Then baseball changed around him. With the steroid allegations swirling and harsher drug testing imposed, home runs lost some of their luster. While the importance of a lumbering, slugging home run hitter being valuable to the team might not have totally disappeared, it has been at least devalued. Players who an run, hit and play a little defense suddenly became more important.

In addition Merlot Joe became the Rays manager. (Please note Merlot Joe is not my nickname, I am blatantly ripping it off from another site - Rays Index). Madden let Crawford be Crawford. Swing away, get on base and run till your heart is content.

Then the Rays started winning. Making it to the playoffs but the team on the national stage for the first time and even though Crawford struggled in the World Series (as did the rest of the offense) people took notice. The talking heads started talking about his talents and the TBA started to get nervous. He wasn’t our secret any more.

In the 2009 All Star game he robbed Brad Hawpe of a potential game winning home run and took home the MVP award. More national attention and more nervous fans. Swiping a record tying six bases against the Red Sox didn’t help. As the Rays dropped out of the playoff race that season the trade rumors started to swirl. Under contract for another year perhaps it was time they cashed in their chips and started over. Thus began the Desmond Jennings hype.

2010 saw the season begin with Crawford still in the blue and white of the Rays. Luckily for Rays fans the team was in contention from the get go. As a swan song Crawford rewarded his fans with the best all around season of his career. His first Gold Glove and Silver Slugger awards, career highs in home runs (19), RBI’s (90), and batting average (.307). Leading the team to their second division title in 3 years he showed all of the potential and sealed his fate in Saint Pete.

The Rays will move on. Crawford’s records will be broken and there will be other players to cheer for. Who knows, in seven years maybe he comes back for a reunion tour. Even if he doesn’t he will always have a special place in the hearts of true Rays fans. In his first game back, welcome him warmly, but then remember he plays for the Red Sox now.

As for me and my personal Carl Crawford collection, well it’s time to move on. Over the next few months I will be liquidating my 100 or so card collection on the Bay. Certain financial obligations that cropped up during the typing of this post do not allow me to trade away the collection as was my original intent. However, if you’re interesting making an offer drop me a line and we might be able to work something out.

It was a good run, and I picked up some neat cards that I really enjoyed. There will be some sadness in seeing them go, but they’ll be another player to collect and more fun cards to discover. The player will be named shortly when I reveal the prestigious Hopeful Chase Card of the Year sometime next week.

Thank you Carl Crawford. Enjoy success in the future, well not too much success……
Posted by Justin G. at 2:35 PM

BTW, I had Carl Crawford on my fantasy team last year and, well, it was a nightmare.